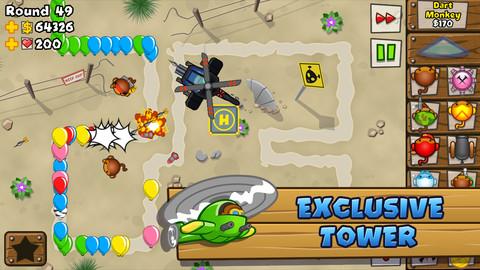 At this point, you could be forgiven for thinking that the tower defense genre ran its course years ago. The glory days of Fieldrunners and its ilk waned as promising new contenders entered the casual arena, and almost every new entry seems but a variation on the same tired theme. That’s why it’s so surprising to see Bloons TD 5 rocket so far up to the top tiers of the App Store. Much like its predecessor, it doesn’t bring much innovation to the genre, but it makes up for this considerable shortcoming through sheer variety and a fun aesthetic.

The premise is simple. Rather than halting running enemies along preset paths with armed towers, you fire at balloons using monkeys with widely different abilities. In the earliest minutes you’ll throw simple darts, but by the time 15 minutes or half an hour fly by (and they will), you’ll litter your map with monkeys who can bomb balloons from airplanes or “super monkeys” who can pop them faster than a speeding bullet. The balloons themselves benefit from similar variety: you begin with one pop balloons and graduate to balloons encased in metal shells or others that remain camouflaged unless ninja monkeys reveal them.

Bloon‘s love of diversity doesn’t end with the units themselves. Once you’ve placed them, you can unlock further upgrades by using a specific monkey more frequently, such as an upgrade that morphs your cannons into missile launchers that spread carnage over a wide radius. Non-combat monkeys add further spice to such an appetizing serving, such a monkeys who operate farms beyond the battlefields and supply extra money for upgrades and new units.

Such a robust system would run the risk of tedium if you had to unlock these dozens of units with each playthrough, so it comes as welcome news that Bloons lets you access unlocked units once you start a new game. (Provided, of course, you have the gold to place them on the map.) Not only does such an approach allow greater freedom is setting up your levels, but it also allows you to tackle the harder modes with confidence. 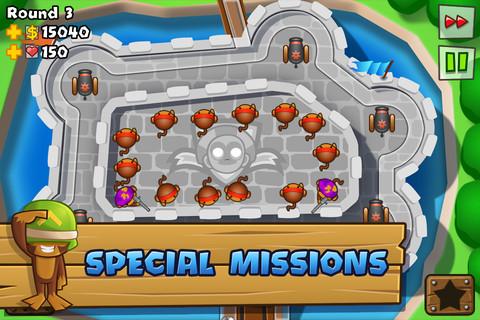 That’s important, because Bloons TD 5 seems considerably more difficult than Bloons TD 4. That’s not necessarily a bad thing, but the enemies come harder and faster, and the powerful balloon units seem better prepared to cut through your defenses unless you bring additional help. That help, of course, comes mostly though premium currency, which you can then spend on facilities that upgrades or weapons on agents that simplify some processes (such as a monkey who harvests bananas from your farm so you don’t have to click on them).

The result, unfortunately, is a game that seems like it’s trying to wheedle even more cash out of you despite its base price tag. It’s still fun, and one of the better examples of tower defense on the market, but it’s hard to escape the impression that Bloons TD 4 wasn’t so piratical in its drive to urge you to spend premium currency. What’s more, Bloons TD 5 suffers from the same lag that plagued Bloons TD 4 once you reach the highest level and find your screen crammed with monkeys and popping balloons. And as an added concern, it’s subject to glitches and crashes unless you log out of GameCenter.

Perhaps these issues will improve in time. As it is, you’ll still find much to love in the early levels of Ninja Kiwi’s new entry in their beloved tower defense franchise, but be warned – this bubble pops a little too soon after it gets off the ground.

Rage of the Gladiator Review