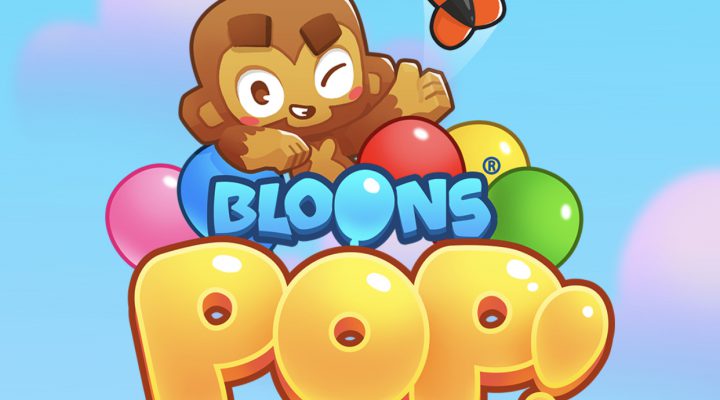 Moves along at quite the rate

Can get a bit repetitive

Not the most challenging experience

The Bloons games have been rolling along for a while now – usually they’re tower defense titles packed full of waves of balloons. Bloons Pop takes a different approach – it’s a balloon popping puzzler that sees you throwing a variety of monkeys at clusters of colored bubbles to clear them from the map. And it’s surprisingly addictive.

A lot of that comes from the simplicity of the game. You drag a line around the screen and release it to fire, then whichever monkey you’ve got selected jumps down from the top of the screen and smashes some balloons. Rinse and repeat. It’s not the most challenging of experiences, that’s for sure.

You’ll collect new monkeys regularly. To start off with you’ve got one that fires out darts, but as you progress you’ll get flamethrower monkeys, ninja monkeys, and monkeys that command packs of spectral wolves. You can merge monkeys too, to make more powerful versions of them.

It’s all very silly, but it rushes along at a pleasant pace and you can’t help but get sucked in. It’s good to pop balloons with monkeys, and soon you’ll find yourself playing ten levels instead of the two you swore you were going to limit yourself to.

There’s some base-building going on in the background – the goodies you earn from clearing the balloons can be spent on sprucing up your destroyed monkey-town, and there are a variety of currencies and gems you have to pay a bit of attention to as well.

But for the most part you’re going to be bursting balloons with monkeys. Then getting new monkeys. Then bursting some more balloons. There’s not that much thinking required here, but it engages your brain in that soft, squishy way that the very best casual mobile games manage.

Bloons Pop is pure, simple fun. It won’t make you tear your hair out, it won’t make you write sordid fan-fiction about the monkeys, but it’ll gum up your thinking while you play it. It’s designed to be a distraction, and it’s very, very good at it.