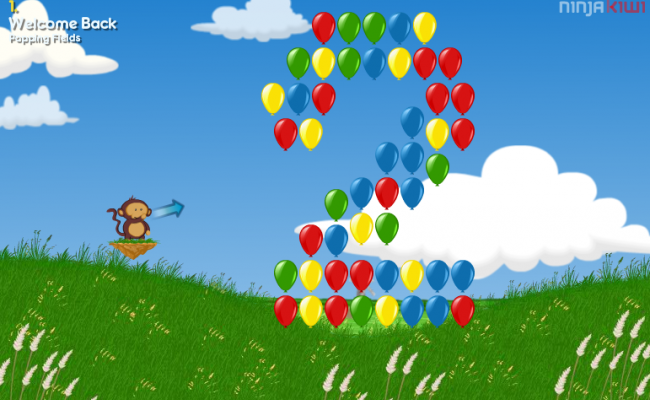 Like all great puzzle games, the original Bloons managed to hook players in with a seemingly simple premise, before quickly ramping up the complexity. All you had to do was pop balloons with a dart, but with a wide range of puzzles, power-ups, and obstacles, this was easier said than done. Bloons 2 doesn’t offer any drastic changes to the formula, but instead adds more features and a much improved presentation to create a better overall experience.

Once again you’ll be taking control of a dart throwing monkey, helping him through a series of stages in which balloons need to be popped. Each stage will give you a goal of how many balloons need popping before you can proceed, at which point it’s up to you to figure out just how to do that. Some stages require you to clear all the balloons, others just a few. There’s nearly 100 new stages to play in Bloons 2, and this time they’re all held together by a world map, much like what you’d see in a classic Super Mario game. There are several different words, each with their own theme, and not until you complete one can you move on to the next. It’s a nice addition, and the different worlds provide some variety, since you won’t be staring at the same backgrounds over and over. 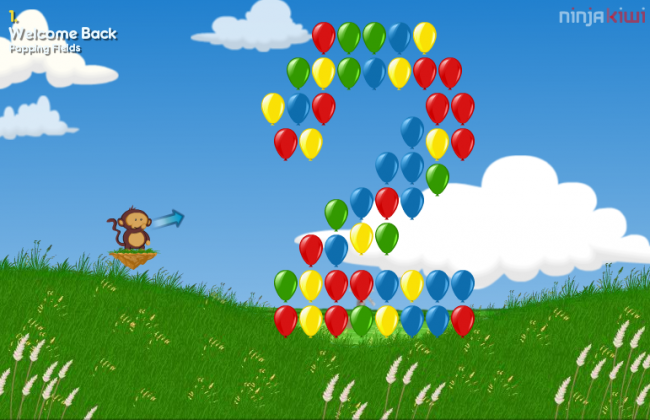 The biggest change in the sequel, though, comes from the new features. The core gameplay is identical to the first Bloons, so success still hinges on a combination of good timing and precise shooting. But there are also a number of new power-ups and balloon types to keep things interesting. You’ll gain access to a fighter plane that can fly right through groups of balloons, as well as boomerangs and multi-shot darts. Popping some balloons will also briefly give you control over a swarm of bees, who will follow your cursor and pop any other balloons in their path. There are balloons that explode, balloons that bloom like a flower, and balloons that disappear. The sheer variety is pretty incredible and it really helps make things very challenging.

And Bloons 2 definitely is challenging. By the time you get to the ice-themed world the puzzles become fiendishly difficult, but thankfully the game offers a bit of help. There’s a hint system to show you how to finish a stage, and a skip function that lets you bypass it all together. The latter is especially fun, as it puts you in control of a super-monkey who uses his laser vision to pop every balloon on the screen.

Bloons 2 is just about everything you could ask for from a sequel. It maintains what made the original such a huge hit, while adding great features to improve it even more. It’s fun, challenging, and has enough content to keep you playing for some time to come. Plus, it has a monkey with laser vision. What else do you need?