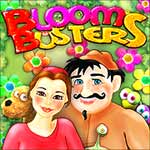 A few gardening games have hit the casual gaming scene, but nothing like Bloom Busters. Instead of simply planting and growing crops, Bloom Busters – combining a little sim with action – sounds like a sequel to The Little Shop of Horrors with strange things happening in the garden that sprouts monsters from underground and produces giant-sized vegetables.

Jimmy and Jessie are gardeners in love and enjoying their lives in Bloomland. You can pick Jimmy or Jessie for your character, and the choice goes beyond simply wanting a boy or a girl – both come with different strengths and weaknesses. Unlike other character selection games, you can switch roles without losing your current progress. Jessie is noticeably faster than Jimmy, while Jimmy looks and acts like Paul Bunyan with super strength.

The story of Bloom Busters is as follows: Mr. Zorg, who wanted no one to bother him, lived in a mysterious old house and worked on experiments in hopes of finding a way to freeze any living thing that came his way. Eventually Zorg created Compound-X and poured it into Bloomland’s water source without doing any testing, which caused strange things to crop up. With your help, Jimmy and Jessie investigate the mystery while beating off monsters.

The tutorial guides players in gameplay and continues providing tips as new things happen. Levels rarely contain the same elements or goals. For example, one level you may need to feed the animals, while another level calls for shepherding the animals from place to place. In another, you water the flowers and protect them from monsters so they grow and bloom. Those darn monsters keep popping up so that multitasking starts feeling like multi-crazy.

Jimmy and Jessie patrol the garden looking for monsters to slap or slime, seeking items to pick up for bonuses, and doing general garden management. It takes a little practice to get the hang of the slime machine, especially since you can add more power to the machine as well as the slapping.

While the different levels offer a nice variety of gameplay, getting around can start to seem like a chore. Some levels venture beyond the screen and others don’t, but it isn’t obvious because both scenes look the same around the edges. When trying to move across the screen into a hidden area, it takes work to reach the destination.

A little map shows up on the screen to point out the locations of the monsters whenever monsters appear, however the map doesn’t appear all the time. With a little improvement, this map would work well as a permanent feature to help players get around better.

Then comes level 17 – the "I’ve had it level" – which quickly turns into a monster that you’d rather quit than conquer (and to top it off, this happens in Easy mode). Level 17 requires corralling pigs from one pen to the other while fighting off monsters. With about 40 levels, reaching level 17 doesn’t even let the player make it halfway through the game without aggravation.

According to details about the game, kids should be able to play the Easy level. Well, an adult experienced in casual gaming couldn’t move past level 17 – not exactly kid-friendly. Regardless, kids should like the game’s bright and colorful graphics. Despite the high quality graphics, however, the bottoms of the letters that pop up in the corner go off the screen a little. You can’t see the signature, but it doesn’t affect what you need to know. Switching to window mode doesn’t resolve this issue as the game goes a little further off the screen.

Also worth noting: the game allows for multiple profiles, but it doesn’t indicate whose profile is active. All you can do is open profiles and look for the name in red to for the currently selected profile. The game also contains a couple of typos.

By this point, between the trouble moving around and the constant monster battling the game had turned tiresome. However, players who can’t find games challenging enough should meet their match in Bloom Busters. Furthermore, the music is enjoyable and an intriguing story complements the action. With a 90-minute trial available, it’s more than enough to decide if this is a cute "little game with color" or a "little game of horror."