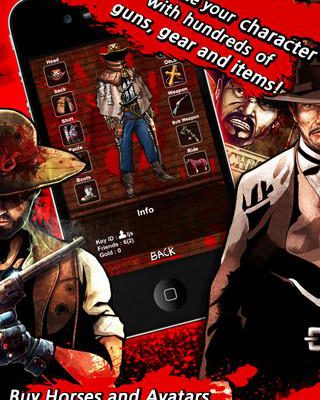 The social space has been flooded with text-based role-playing apps for years with a heavy focus on mobs. But the Western theme has never really been too common, which is what makes Bloody Western, from Mobicle, so initially appealing. An RPG not terribly dissimilar from the iMobs and Mafia Wars of the past, it’s a title that seeks to stand out from the crowd with more than just a visual shift, but a compilation of extra features and systems. All of it works quite well too, becoming marred only by a conclave of minor irritants and occasionally missed opportunities.

Entering the Wild West, players get to opt from one of two factions consisting of the lawful Sheriffs or renegade Outlaws. From here it’s a matter of selecting from the standard gamut of classes for such games (earn more money, earn more energy, etc.), followed by a head-first dive into dusty saloons. It’s not too bad, given the tutorial from a saucy bar girl and the relatively standard core design.

Veterans of games like iMob should feel right at home with the basic play consisting of performing storyline quests, dueling other players, and buying into business ventures for periodic income. The quests aren’t too shabby either, and consist of merely tapping buttons to perform them and repeating such numerous times to “master” them. As a nice expedience perk though, players can do the quest multiple times at the cost of extra energy. That said, working through the quests is incorrigibly slow as the energy requirements for even the first tier drains users rather quickly.

Along with this, the slow pace is increased by the sky-high prices of equipment required for some quests. Even trying to buy a new hat costs around $200,000 (not exactly historically accurate). It’s not a deal breaker though, as Bloody Western is still perfectly playable and there’s even an option to enhance, with some extra cash, items to be more effective stat-wise.

Next up is dueling other players, which comes with a nice gimmick unique to this particular app. Unlike many others of its ilk, Bloody Western duels come with a minor element of control. In addition to comparing player stats and equipment to determine a winner, users get six bullet-shaped targets presented on their enemy. A bullseye will then center in on random targets, and tapping them with the proper timing will increase damage and a chance at winning. It’s an interesting mechanic, but it does wear thin after a while. An option to turn it off would be nice to have. 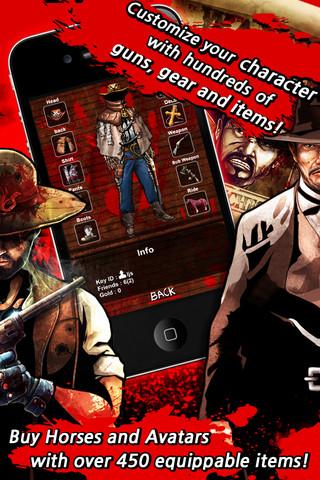 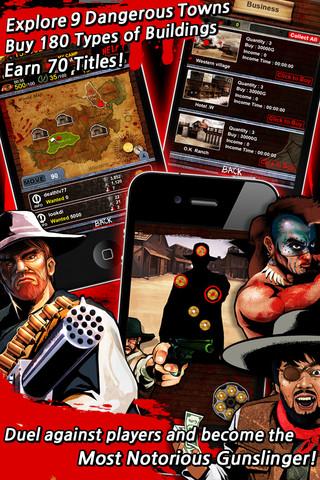 What’s also unique to dueling is that doing so will also increase one’s notoriety. In addition to earning ranks, defeating enough opponents can turn the player into a “Wanted” target that can be hunted down. What’s interesting about it though is that players can move from town to town in the game world – via purchasable horses – so it’s actually a lot like a real manhunt. If players aren’t in a town with a wanted player, they won’t be able to attack them. Moreover, moving to different towns requires “movement points” (based on the quality of horse) so it’s also not possible to constantly venture from town to town in search of these high level targets (movement points recharge like energy).

Traveling between towns also offers more in the form of the noted business ventures. Each town has different facilities that Sheriffs can purchase for periodic income, while Outlaws are able to “rob” said facilities. It’s a cool idea that makes it worthwhile for users to travel about the world a bit.

Once players run out of energy and movement, they can still play with some of Bloody Western’s other mechanics such as Events and Gambling. The former is one of the noted missed opportunities, as it’s fairly underwhelming. Currently it only consists of participating by tapping a “Join” button, and the only two events seen are a prospecting gig that never seems to get enough players to actually start and a “war” between Sheriffs and Outlaws. There’s a bit of an imbalance, too, as Sheriffs always win since it is based solely on how many players participate. What does stand out as a bit more interesting is the gambling, where players can bet some of their in-game gold against others in a card game, but as it stands it’s just flipping over four cards to see who has the higher hand.

Other than this, the only significant irritants are just a collection of minor oversights. The app has a number of typos and isn’t always clear on how things work. For example, there’s a daily lotto, but players have to go digging for information on how to win (flip over three of the same card). There’s also vagueness in the real difference between Sheriffs and Outlaws at the start, making the decision fairly arbitrary (even after playing for some time, the “conflict” between the two factions feels minor).

Overall though, the bulk of Bloody Western is pretty good. So long as users don’t mind the slow burn of questing and dueling, it’s a nice change of pace from all the carbon copy mafia-themed games on the market. It’s not perfect, but Mobicle does present its gamers with plenty to do and has created a fairly strong foundation to build upon. That said, it will be curious to see just how this app grows and evolves in the coming months.