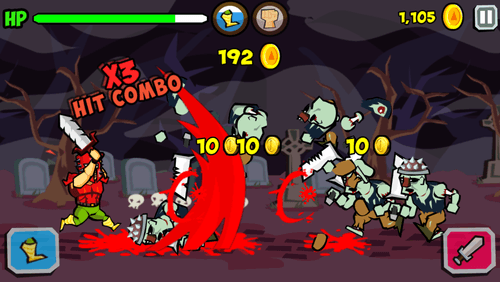 Bloody Epic is a bloody letdown.

The automatic runner is a genre that refuses to die. There’s little innovation that takes place among this vast group of games. That’s not necessarily a bad thing, as some of the best games are more polished than they are innovative. Then there’s Bloody Epic, a brave attempt at taking an otherwise bland runner and fusing it with solid RPG elements. The result is a game overflowing with ambition, but lacking in polish.

The main gameplay of Bloody Epic follows the path of similar games. Your character is automatically running on a two-dimensional plane. You’re given two on-screen controls: Tapping the left side will have you jump backward, while tapping the right side will switch between raising and lowering your sword. Using an up/down toggle instead of a simple attack button feels odd at first, but the decision makes sense once you encounter certain enemies.

The enemies are the first thing that makes Bloody Epic stand out. As your run through a stage, you’re constantly being greeted by hordes of charging orcs. You need to slice through each of these monsters before they attack. This starts off simple enough, as a simple tap of the sword will take them out.  That strategy quickly dies once you start encountering the variety of armored enemies. Either through the game’s notifications or your own trial and error, you’ll quickly learn that certain enemies are immune to certain attacks. Shielded orcs must be killed with a downward slash, and those with helmets must be impaled. This is one of the few impressive details Bloody Epic has to offer, but it’s one that stands out.

You’re instantly equipped with a limited-use slash attack, that destroys most enemies on screen. It’s a nice ability, but it does little to help you with the gameplay’s biggest annoyance: waves of enemies. Occasionally, you’ll run into a group of enemies that seems unbeatable. It’ll look like the perfect combination of shields and helmets, and going in head-on will lead to a huge loss of life. Using your slash often solves the problem, but this sometimes happens just frequently enough where your slash isn’t always available.  It’s not a deal breaker by any means, but it’s frustrating to fail an otherwise perfect run because you just can’t get through.

The RPG influence of Bloody Epic is where some of the ambition falls short. You’re given HP and attack stats. These stats are important as you play, but at the same time, they don’t feel like they matter. At no point could I tell you what my HP or attack values are, because the game doesn’t seem to care. The numbers are listed for you, but without any point of reference, those numbers feel arbitrary. You can use in-game gold or premium diamonds to purchase weapons, armors, items, and stat-boosters, which all raise/recover HP and attack. Items unlock for purchase as you complete stages, and it gets to the point where you’ll just buy something because it’s there and it’s better than what you’re using. There’s no real sense of character customization, making the RPG elements feel worthless.

You can’t deny that Bloody Epic is built on a great idea. And when you look at each part separately, the game has little excuse to not be great. For whatever reason, when the runner, RPG, and action elements were combined, the final product lost what could have made it special. Bloody Epic is not a bad game. Its ambition alone make it deserving of your time, but it’s unfortunate that that same ambition is overshadowed by a lack of polish and a forgettable experience.