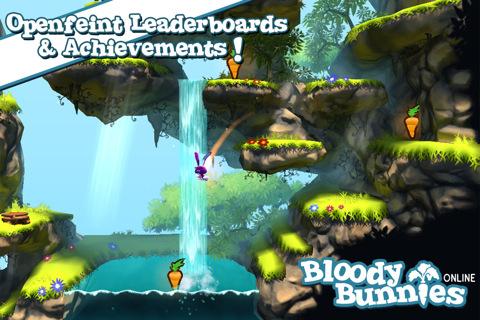 These bunnies may be cute, but they don’t have much else going for them

Are you a fan of bunny rabbits? It’s OK if you are. They are, after all, adorable. And they’re cuddly. Not to mention a lot of fun to play with. But, in Bloody Bunnies, the new action platformer from Mentalwarp Games, they have to die. If that sounds appalling to you, then you should probably move on right now. If you’re still intrigued, though, you should still move on – mainly because the game just isn’t that much fun.

The gameplay is incredibly simple. Players control a cute little bunny rabbit who needs to wipe out its on-screen cohorts. In order to accomplish this task, they have to jump on the other rabbits. The controls are also simple: there are two arrows that control horizontal movement and a jump button.

The stages are set up with multiple levels, all of which the bunnies jump between. Meanwhile, there are environmental pieces that affect movement, like springboards that will launch a bunny farther than it could normally jump, or ice that it can slide across. However, there are no special attacks or abilities, and the platforming combat starts to get old much too quickly.

The game only has online matches available to play, and there are four different game modes available. There’s Deathmatch, Carrot Hunt (where the goal is to be the first to accumulate a certain number of carrots), Survival, and Custom (which allows players to blend elements from the other three modes. Unfortunately these modes are all pretty basic, and they don’t have any real lasting appeal.

Where Bloody Bunnies gets things right is the visuals. This is a very pretty title, complete with sweeping landscapes and adorable little rabbits. Each environment perfectly conveys a season, and there are nice subtle touches like rustling trees, moving waterfalls, and falling snowflakes. But, at the same time, there’s no real diversity. The maps never really change, and the bunnies themselves are identical except for their colors.

The soundtrack, meanwhile, is charming – at first. But after a little while it quickly becomes obvious that it’s the same little diddy playing in the background, over and over again. From that point on it just starts to grate, and then it’s probably safer to just turn the sound off. 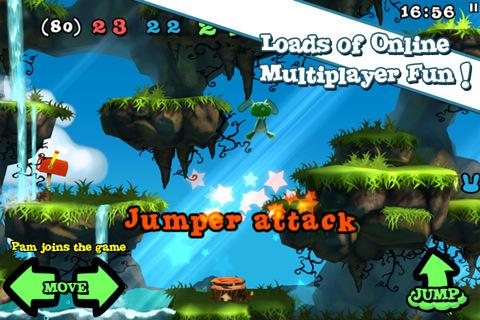 For an online game, the connectivity is pretty unimpressive. I tried to join a couple of different matches that were hosted by other folks (connecting via my Wi-Fi connection, I never used 3G). Often as not, I’d get an error message when I tried to connect. And when I hosted games, players would randomly drop out. If this had only happened a couple of times, it would’ve been irritating. But since it happened regularly, I found myself increasingly frustrated at the lack of reliability.

Bloody Bunnies is kind of like Baywatch, provided you’re old enough to remember that show. It’s pretty to look at, but it doesn’t have much else going for it. Bloody Bunnies is much too simple, doesn’t have nearly enough content to keep it fun, and there’s practically no reliability when it comes to online gameplay. In short, you’re better off just hopping past this one, folks.