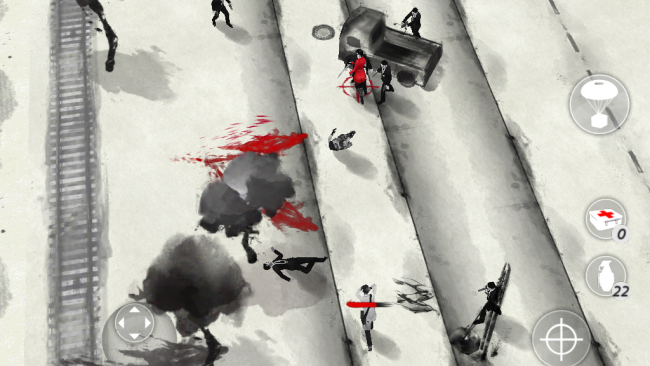 Black and white and RED all over

From legendary action filmmaker John Woo, Chillingo’s Bloodstroke serves as a fun-filled reminder of all that is brutal and beautiful in the world. While this isn’t Woo’s first ever video game (he also made Stranglehold for home consoles in 2007), Bloodstroke marks the filmmaker’s first foray onto the mobile scene. And while the thirst for action soaked in blood is definitely the biggest selling point of this release, it’s the loud story of betrayal and the breathtaking, painted visuals that truly elevate the game into a piece of art that action fans can’t help but appreciate.

The storyline is certainly simple as events unfold in comic book-style cutscenes in between the levels, but it still brings enough twists and turns to get the job done. As “Lotus,” a newly recruited and trained security agent, you’ll need to advance through locations such as Hong Kong and Beijing while protecting your client, Dr. Koorse, who is at constant risk of being killed by entire armadas of street thugs and soldiers. It’s a fitting setup that’s meant to lead right into Woo’s trademark action world of violence and bloodshed.

The entire art style of Bloodstroke looks as if someone painted over every screen with black and white watercolor paints. You can even see the watery brushstrokes sweeping across the moving environments, whether in an accent on the road or simply swirling off the tops of the trees. It’s rare for a game that’s so rooted in action and gory violence to evoke such feelings of art and candor, but that’s exactly what Bloodstroke manages to achieve, and it’s something that adds to the story’s allure in a wonderful fashion.

Of course, it’s not all black and white in Bloodstroke, as the contrasting color of red plays a crucial role in the presentation. The only splashes of this color that you’ll find in the game are the red trenchcoat that Lotus wears, and of course, the bright gushing blood that spews out of your enemies as you slay them up and down the streets. Another nice touch is that after an enemy’s blood has been spilled, the red quickly fades to black and remains on the world’s canvas: letting players essentially add to the living painting with more bloodshed.

The gameplay itself is just as smooth and fluid to behold. Players move around the screen by using a virtual left thumb-pad, and executing a melee attack is as simple as running into your enemy. A separate button in the bottom-right corner is used for firing your equipped weapon, while two others are used for throwing grenades or giving Dr. Koorse a health pack. Your main goal in each level is to protect the doctor at all costs as he constantly runs towards the extraction point, and his health bar might as well serve as your own: if anything happens to him, it’s game over mister!

While it’s easy to see how this simple formula of “kill everyone in sight” might run the risk of getting stale over time, Bloodstroke introduces enough new concepts to always keep the gameplay feeling fun and devilishly fresh. Whether it’s from throwing new bad guys into the mix like snipers or hoodlums on bikes, or letting you take on a wave-based arena mode with a series of endless runner-esque missions to complete, there’s always a welcomed change of pace for anyone who wants it.

One thing I did find to be a little bit odd about the Bloodstroke experience, however, is the imbalance between melee and weapon-based attacks. The game rewards you with a 3X score bonus for every enemy you kill using a melee attack: most of which are almost required to earn that three-Lotus Flower finishing score. This decision choice dissuades the player from using their arsenal of upgradable weapons like pistols and shotguns, and I found myself rarely falling back on my guns unless I absolutely had to. At least pulling off these brutal melee attacks is infinitely more satisfying than firing a weapon.

Another issue that feeds into this problem is the fact that Bloodstroke feels way too easy, and upgrading my weapons or characters never seemed to matter too much. Lotus herself doesn’t appear to have any kind of health bar that I’m aware of (I never had her die on me once from beginning to end), and so forging ahead into enemy fire or otherwise pulling off sloppy maneuvers doesn’t really have that much of a penalty attached to them. 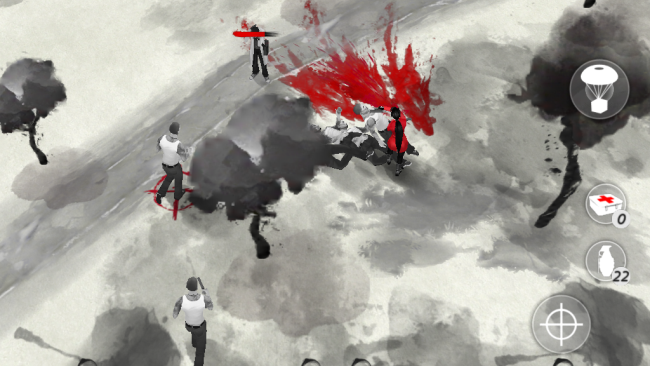 The good news is that if you do find yourself having trouble with your mission, the game is very generous in letting you build up more currency to buy new powers like increased hit points for Dr. Koorse. Additional money can be earned by doing everything from completing levels with a three-Lotus Flower rating, to chipping away at the three different arena mode levels, to checking off a long list of fun and easily obtainable achievements.

So even though the game might be a little too easy at times with a score system that greatly favors your melee attacks over your weapon-based ones, Bloodstroke is still a bloody and beautiful good time. With a whimsical and picturesque art style, and a simple blend of action gameplay with just enough depth to always keep you on your toes, John Woo and his team have stumbled on another winning formula as they enter the mobile world. Just don’t expect to wash that blood out of your paint brush any time soon.