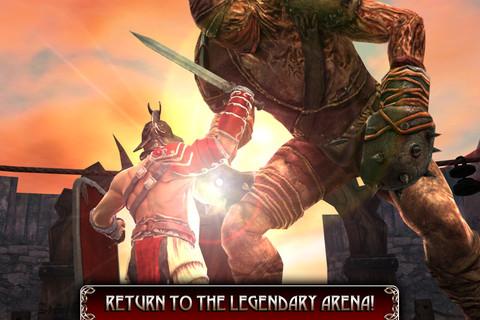 The good kind of deja vu

It seems that one good riff on Infinity Blade deserves another. Glu Games did it once before with Blood & Glory, and now they’re getting right back in the arena with Blood & Glory: Legend. The gameplay is much the same as you swipe your way through brutal freemium gladiatorial battles on iOS and Android, but there’s more of just about everything else.

That includes a story. This time around, there’s a reason for all of the carnage, and it plays out in a series of comic book pages that are unlocked throughout the game. Blood & Glory: Legend focuses on a man who has been given the name Spaniard… er, Crimson, and has a grudge against the emperor. In order to get a shot at killing the head man, he must first fight his way through tournaments in a number of different locations, each one more difficult than the one before it.

Anyone who has played the game’s predecessor or the title that obviously inspired it should know what that entails. Combat is a timing-based series of swipes and taps, based around the fact that your opponents aren’t just training dummies that can be hacked up at any time. You have to create an opening first, either by blocking, dodging or parrying incoming attacks. The first method is easiest but depletes a reserve that only replenishes very slowly. Dodges and parries have to be done at just the right moment and in the proper direction.

Once your opponent is vulnerable, a simple swipe will do, or the right sequence of swipes can pull off more powerful combos. A special meter that fills up with all successful actions allows you to bypass the normal sequences with a powerful burst. Fights can also be paused to use potions to replenish health or give boosts to blocks or attacks.

Victories give rewards in the form of coins, which can be spent on new armor and weapons in the game’s store, plus experience points. Enough XP advances Crimson to the next level of Glory, unlocking new gear and amulets (this game’s take on a freemium staple, as they can give combat, coin or XP boosts) and providing three skill points. Those points can be placed into attack power, an improved block meter or more health as you see fit. Blood & Glory: Legend also hops on the three-star train, giving out a perfect rating only if you successfully defend 100 percent of an opponent’s attacks en route to a win.

Fans of the first game should not be surprised to learn that this one looks amazing. The gladiators and backgrounds are crisp and detailed, and the designers came up with a staggering amount of weapons and armor. The types of opponents are more varied too, ranging from normal-sized men to giants to females with Wolverine-like claws. The only thing the sequel dishes out less of is blood, strangely, doing away with the bleed-outs and decapitations from the first title. 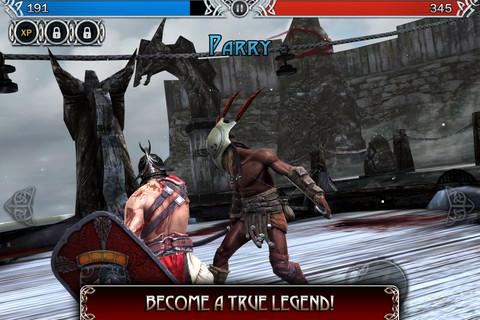 Other new features include daily challenges that grant bonus rubies for accomplishing specific objectives, plus a daily bonus that increases with each successive day that you log in and win three fights. Unless you are an absolute whiz at this kind of game, you’ll probably need those to make substantial progress, as the enemies get much tougher once you get past the first two arenas, and your character just doesn’t earn coins or rubies fast enough to keep up. The best gear costs plenty of rubies, making it feel a little too much like a pay-to-win proposition.

Yet it’s not hard to see plenty of people attempting to help Crimson cut a path of destruction all the way to the emperor, because the production values and action are really good hooks. Blood & Glory: Legend doesn’t deviate much from a tried-and-true formula, but that’s because it’s one that works.