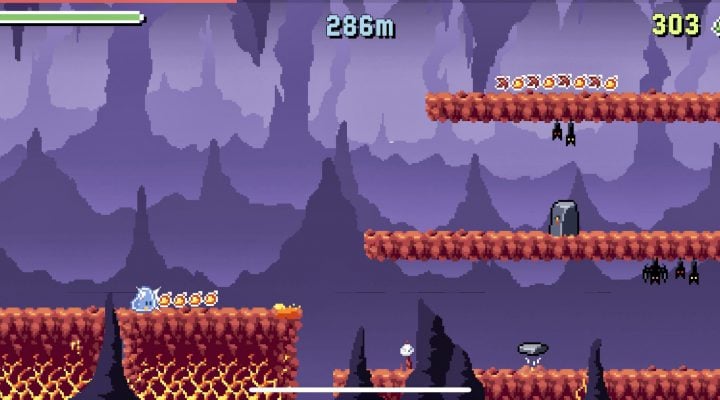 A lot of depth

Can get a little repetitive

At first glance Blon could be another simple auto-runner. It’s got all the parts that make up the genre, from one-touch controls to scattered pick-ups you need to grab. But it builds on that framework to create something a good deal deeper and a good deal more engaging.

You’re controlling Blon, a blob of goo who’s running through levels packed with obstacles. You tap on the left side of the screen to jump, leaping over gaps and enemies to keep moving towards the bosses that break up the regular bouncing.

When those bosses appear you can tap on the right of the screen to shoot at them. You’ve got a set amount of time to take them down, otherwise you’ll take a chunk of damage that could end your run. The third boss of the level sees you flying through the air carried by a bird.

You’ll collect leaves as you move through the game, which can be spent on the expansive skill tree. Here you can increase various stats, boosts and buffs, making you stronger for the next run. Any leaves you don’t spend before the next run are lost, though, so you need to make sure you use as many of them as you can.

The game moves along at just the right pace. The moment you’re about to get tired of a level, you’ll unlock the next and have to face a new set of challenges. Blon is never overwhelming, but it’s always ready to step in with something fresh to keep you entertained.

And while it isn’t an easy game, its challenges always seem eminently conquerable. It lets you make a couple of mistakes before you’re dead, and even when you do fail you can up your stats and jump back in more powerful than before.

Blon is a game that grows as you play it, always slipping in a new surprise or an intriguing idea. It might look like it’s shallow, but there’s a depth here that’s going to keep you coming back for more.