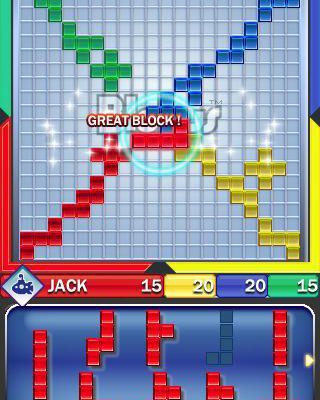 Blokus from Gameloft is a digital version of the award winning board game of the same name. The board game has been popular for quite a while now and has a number of accolades under it’s belt, including an endorsement from MENSA. It’s a game I’ve always enjoyed and was excited to find out I could both have it portable and always have a willing (albeit digital) opponent. So, does digital Blokus stand up to it’s analog brother?

Blokus is an abstract strategy game, which really just means there’s no story involved, similar to Bejeweled or Chess. In it you have various Tetris-inspired pieces that you’ll be placing on the board in order to claim territory faster than your opponents. It sounds easy, but there’s one major caveat that keeps this game interesting – none of your pieces can ever be adjacent to any of your other ones, they must be placed touching at least one corner of pieces already on the board. All of your pieces can only ever touch the corners of your other pieces. 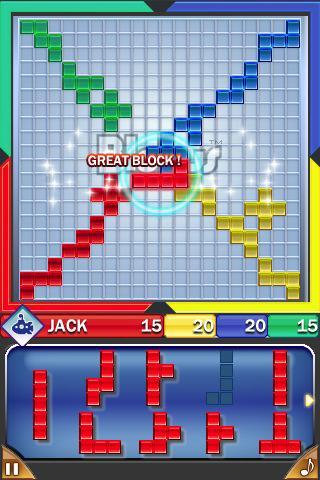 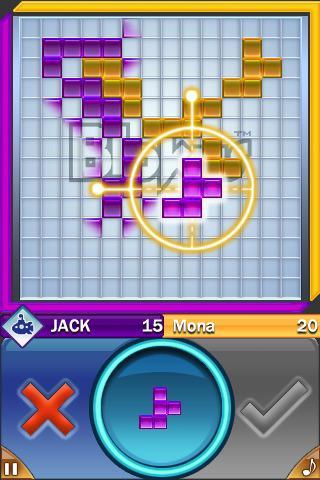 It’s a game of cat and mouse with your opponents, trying to block them while getting as many of your pieces onto the board as possible. Some pieces have many corners which give you more options to place subsequent pieces, where the straight line pieces (while good in Tetris) don’t really give you many options. The goal is to get as many of your pieces down as possible before running out of options.

There are a few ways to play Blokus on the iPhone with expected modes like quick play and multiplayer (both local and internet) options available. The main game mode is tournament mode, which is really a misleading way of describing it. You’d think the tournament would just be your basic bracket style game where your goal is to win it all, but what you have here is really more of a campaign experience.

You’ll go through different groups of games in increasing difficulty and will be tasked with particular objectives that don’t always mean winning. For example, in the first game you need to not come in last place. Later on you need to keep your opponent from placing a certain number of pieces. It’s a great way to keep the game fresh and forces you to play it differently than just trying to win outright. This tournament mode is the cream of the crop for Blokus. Normally these games run the risk of getting boring when you play the same game over and over, but having different objectives alleviates all that. 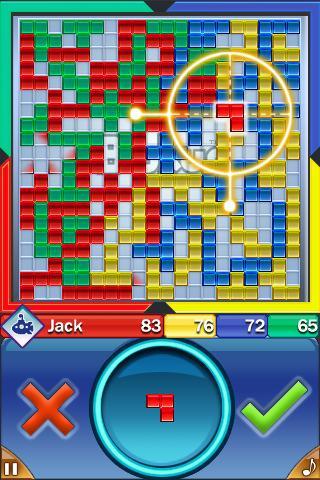 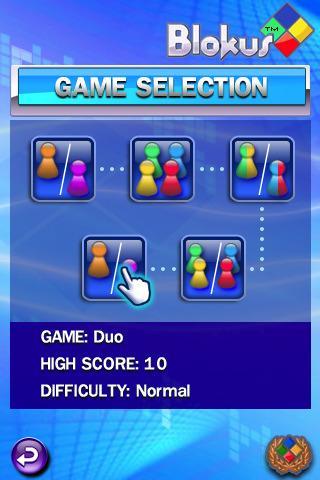 I don’t say this often, but the AI in Blokus is very well balanced. The computer players are hard enough to be challenging, but never once did a move feel cheap or overbearing. AI balance is extremely hard to nail down so I think it’s worth drawing attention to it when it’s done well. Playing Blokus on the iPhone will leave you with a feeling of satisfaction when you win and an “I can take ’em next time!” attitude when you lose.

My only complaint is a small one. The interface to select the pieces and then rotate and flip them is a little dodgy. Numerous times the tile that was selected wasn’t the one I wanted and it wasn’t sure if I wanted to move, flip or rotate the piece before placing it. Luckily there’s a confirmation button so you’ll never pick or place a piece by accident, you can always just not confirm it and put it back. Small potatoes, but worth noting.

The game was released a little while back and had an issue of constantly crashing for some players, myself included. It was a shame because I was looking forward to taking Blokus on the road. Gameloft has patched the game up nice, solving any crash-related problems one may have encountered. I can firmly say it was worth the wait.