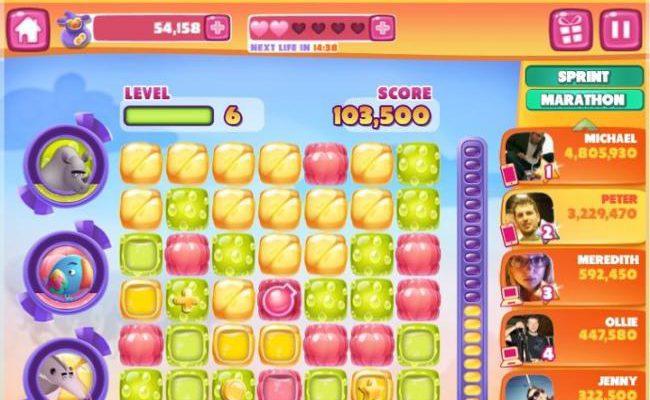 Dietary statistics indicate that the average American doesn’t eat anywhere near his or her daily recommended intake of fruits. Hibernum Creations has developed a solution, though the social games company probably doesn’t know it. Playing Blockolicious, a unique match-3 puzzle game for Facebook, will make you want to bite into a big ‘ol juicy melon. It’s pretty darned fun to play, too.

Blockolicious‘s closest relative is Diamond Dash, another gem-matching game. The mechanics are similar: You need to match up groups of three or more gems (in Blockolicious‘s case, fruits), which fills up a level bar. However, Blockolicious veers away from Diamond Dash and does its own thing by way of “juice blocks.” When you match up a group of fruits, those fruits transform into a single “juice block.” When you tap on a group of three (or more) juice blocks, they turn into a juice bomb, which explodes all the similarly-colored blocks on screen. Whew. Clean up in all the aisles.

Blockolicious has two gameplay modes: Marathon and Sprint. Sprint mode is a timed arcade experience: When you make a juice block, its juice rapidly depletes unless you can form another juice block beside it. If you fail to do so, the empty juice blocks explode. The round is over once the timer counts down to zero, and your score is tallied up. 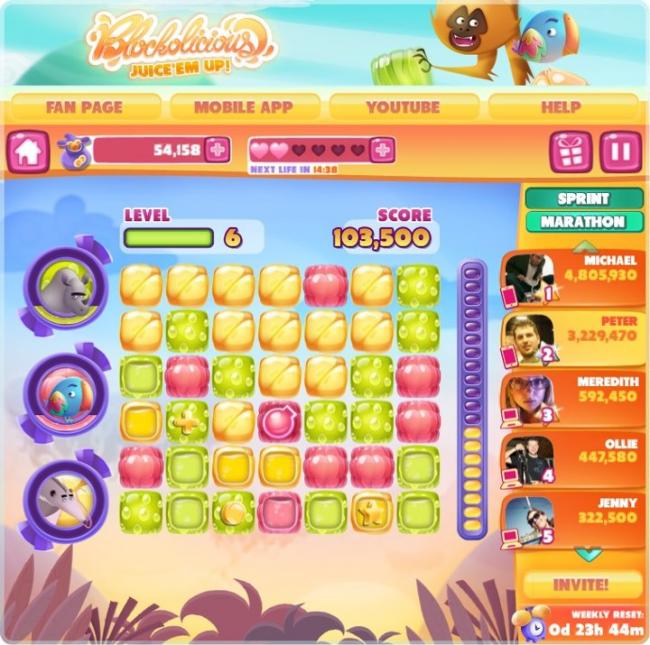 Sprint mode is pretty intense, which is why more laid-back players might prefer Marathon mode. There’s no timer when you play Marathon, and the juice blocks don’t deplete and explode. Instead, an energy bar depletes as you make moves, and refills as you explode juice bombs or level up. Your game is over when you run out of moves.

True to most cutesy match-3 style games, Blockolicious has a menagerie of colorful animal helpers that you can purchase at the start of each round with soft currency (in this case, gold). The animals perform helpful services—clearing away rows of blocks, for example, which lets you get a fresh perspective on your board—that will help you out of tight spots.

Blockolicious is a well-balanced game. Speed freaks will feel their blood pressure rise as they play Sprint mode, and those of us that prefer to meander are free to think slowly and carefully through a Marathon session. Moreover, if you played Blockolicious on iOS, you’ll be happy to know that the game’s invasive and annoying video ads have seemingly been done away with for the Facebook version. 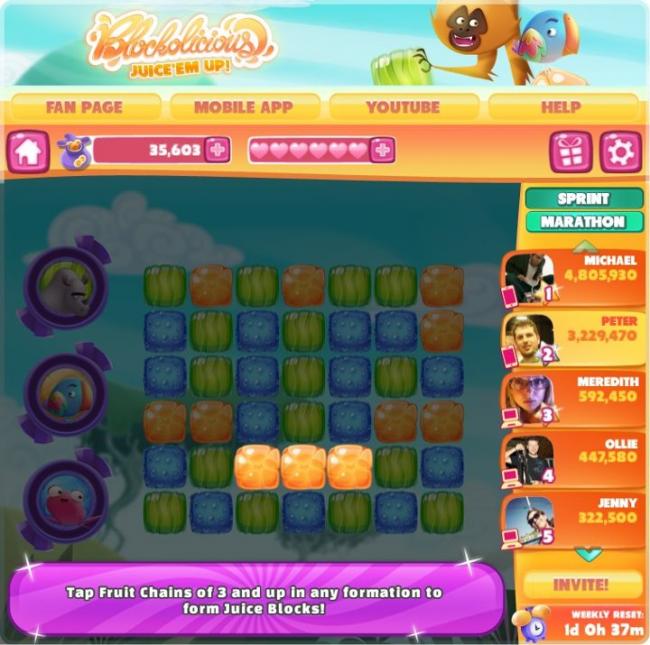 If Blockolicious has a drawback, it’s the Energy System. True, Energy Systems plague every Facebook and social game in existence, but Blockolicious takes you for a bit of a ride by charging one Energy for a Sprint game, and two Energy for a Marathon game. Granted, Marathon games last much longer than Sprint games, but if you suffer through a particularly unlucky Marathon session, you’re down by two Energy instead of one.

It’s a tiny complaint, though. Blockolicious is a great Facebook puzzle game, so go bananas. Go apples, too. And raspberries, and grapes, and watermelons, and—