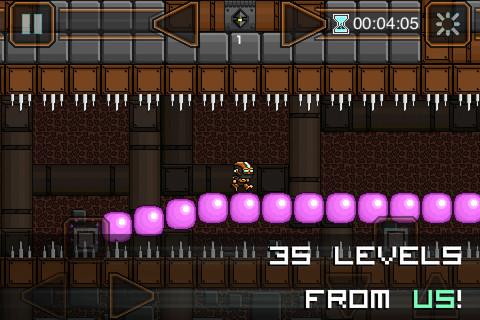 Jump! Jump! No! Why aren’t you jumping!?

After having turned off my phone in disgust for the umpteenth time, I come into this review as a beaten and defeated man. BlockHopper, a game from Green Pixel, is frickin’ hard. Perhaps it is simply my ego talking, but after numerous attempts, I still cannot get past the seventh level of the game—and I contribute more to the controls rather than a lack of skill on my part. As such, unless you’re a glutton for punishment, you should probably steer clear.

In BlockHopper you control a little robotic character through various stages. On certain stages, you are able to place blocks on the stage to help you leap to the finish line. When you go into building mode, the clock that is running stops, and you are judged only on the time spent jumping from platform to platform (there are gold, silver and bronze medals for completing levels in a certain time). Of course, you get a finite amount of these blocks, so you have to be judicious on where they are placed. One blocks are placed, you cannot take them back. Each level will have different properties included as you progress. For example, the game includes switches that light up different colored blocks that either can serve as bridges to where you need to go or become barriers depending on how they are set.

All of this underlying core gameplay is perfectly fine. Where the game falls down is in its control scheme. It employs the use of directional arrows (left, right, up, and down) on the screen that you touch to move your little robot man. I have never been a fan of this set up myself—you just don’t get the same kind of responsiveness or comfort from on-screen keys as you do from a traditional button pad. It is far too easy to lose sight of where your fingers are in relation to arrows, and BlockHopper is a game that is extremely unforgiving in terms of time to complete tasks.

In the aforementioned level that completely demolished my will (until I beat it in between writing the first and second paragraph of this review—take that, game), you have to engage a switch to light up blocks, jump across said blocks to two more switches—one that lights up the previous blocks, and another that takes out blocks blocking your path to the finish mark. You must use the left and up arrows simultaneously, which usually had mixed results. I’m not sure if the game was not recognizing my input or my fingers were off target, but too many times I found my character either not moving in the correct direction or repeatedly not jumping and then falling to its death. I would put my money on my fingers being misplaced, but I think it will be the experience of most players. The buttons are not big nor do they pop out of the screen at you. Unfortunately, with all this control fumbling, the game still demands efficiency from its players—something the controls will not allow with any regularity.

BlockHopper also includes a fairly robust level editor, where players can create their own custom levels and are able to upload and download the best of the best. The system works very well and the developer plans on releasing updates to their game that include the best community levels in the game proper. Being completely bereft of talent, creativity or eye for design work, the editor itself is useless to me, but the content the community should be pumping out gives the game insane value to those that can keep track of their fingers.

For most players, BlockHopper is too much of hassle to be fun. Everyone likes a challenge, but you cannot ask players perfection when your own control scheme doesn’t accommodate for it. Unless you are comfortable with the control scheme and don’t mind a bit of challenge, find another game to get your platformer fix.

The Scruffs: Return of the Duke Review