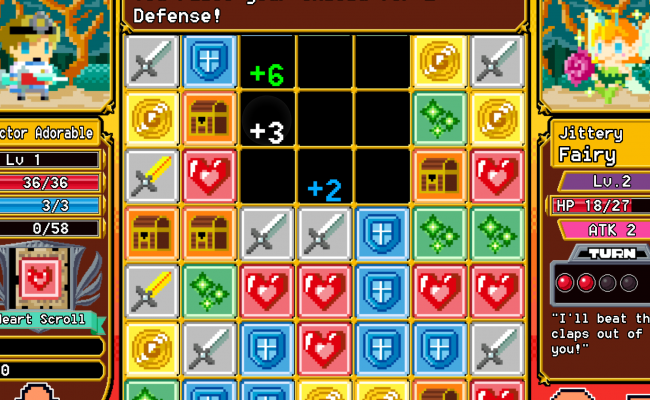 I’ve not felt the draw of a Puzzle Quest game since the first one. The novelty of RPG mechanics met with match-three gameplay wore out for me quickly as I realized even the developers behind them weren’t sure what made those games great.

Now I have Block Legend. It’s full of obligatory pixel art and chiptunes and the super deformed character design you expect from an indie dev. What it’s not is a Puzzle Quest game — it’s not even a match-three game. It is, however, a blend of puzzle and turn-based RPG. 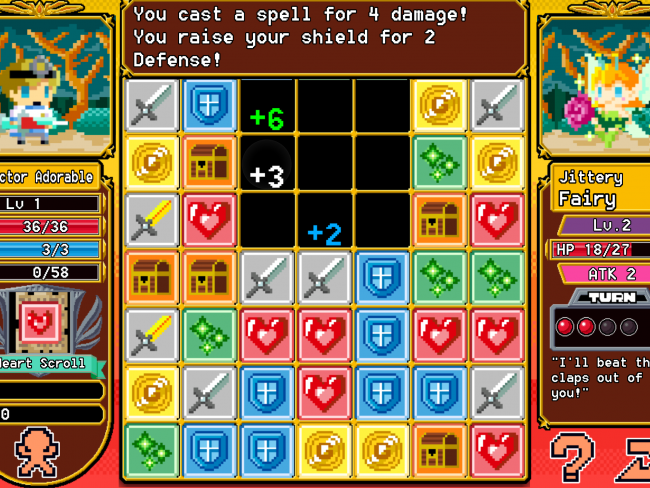 Your character (more on those later) moves from left to right automatically, running into enemies while you match blocks below, a la 10000000. Rather than switching blocks about to match, any number of identical tiles can match at once.

You are the destructor, not the builder. When two or more matching blocks (be they shields, swords, hearts or magical sparkles) make contact, you tap to remove them. Just like match-three games, the more that match, the better the reward. Shields brick up your defense, swords cut chunks off monsters, etc., etc.

Once you best a boss or finish a side quest you’re rewarded with “starblocks.” This is the currency with which you purchase one of many, many new characters. It’s also the only method of permanent progression as Block Legend features elements of that most contentious of genres, the “roguelike.” 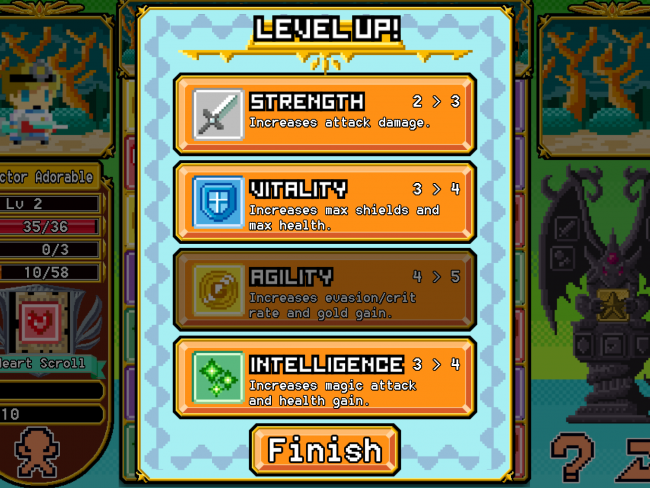 Should you die, you’ll lose all of your progress and resources, starblocks being the only exception. Any random hero can be purchased in exchange for the same number of starblocks, but each purchase raises the cost of the next. I’d say this means you should spend you should spend wisely, but besides a silhouette of your cutesy, cloying character, there are no hints as to their abilities. Without the aid of a guide, long-term progression is entirely random.

As it happens, breaking those blocks is much faster than, say, building them into combinations. Block Legend clips along at a mighty pace — to its detriment at times. Random encounters load up so abruptly, and one falls into the groove of busting blocks so quickly, that it’s not uncommon to make a move intended for character building during a fight you didn’t even realize was happening.

The game is literally unable to keep up in such cases. The experience blocks you meant to hit will become swords in the time it takes finger to meet screen, netting you the original reward, but still consuming one of your combat turns without dealing damage. 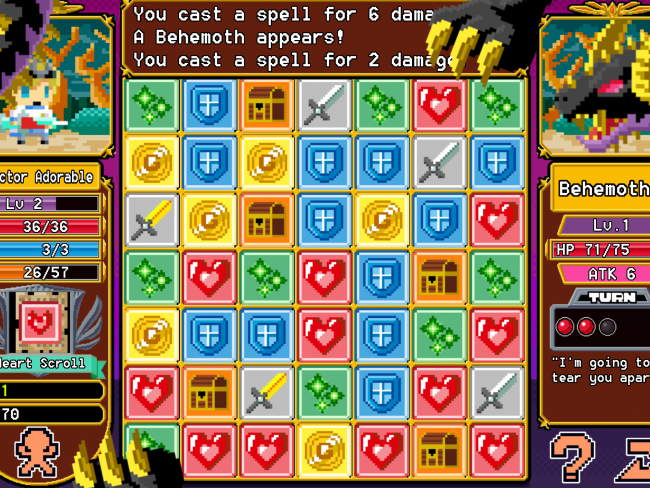 By the game’s own rules, this shouldn’t be possible. When it happens, it turns a difficult game into a frustrating one by wasting my turns. What’s worse, it interrupts the flow of better strategies. I like to let swords build during fights while blasting away with magic so the former might turn to experience afterwards. If I had a warning before combat, I might decide to choose another combination.

Normally I’m ecstatic for any roadblock between in-game actions to be smoothed over. In Block Legend, that design is excessive. I didn’t even think that possible.

Technical issues don’t end there, either. Block Legend features some serious overscan issues on my iPad Air. Because the center of the screen plays host to the titular blocks, your general RPG screed (experience, health, gold and such) flanks either side of the screen in landscape mode. It hardly makes the game unplayable, but it can interfere. It’s also incredibly distracting, as I’ve never seen this particular issue in a mobile game before.

Glitches can’t outshine the game’s design flaws as the worst aspects of the game, however. The frenetic art and pace blend favorably with chipper chiptunes to make this a win in the presentation column. However, they do nothing to make it feel anything but shallow in the design department.

There’s a lot to like about Block Legend, but none of it goes deeper than the surface. It may not summon the frustrating slowness of latter Puzzle Quest games, but neither does it capture the satisfaction of the first entry or the constant build-up of 10000000 – the games to which it owes so much.