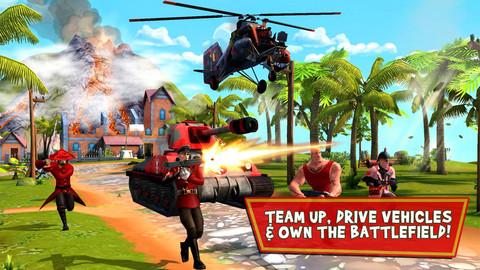 Gameloft is doing that thing again. This time it’s by bringing Blitz Brigade, the equivalent of a certain super-popular, cartoony, team-based PC first-person shooter to iOS devices. I made my peace with the developer’s methods a while ago and have since learned to love their games for what they are: high quality approximations we’d probably never see on iPhones otherwise. However, when making an online shooter, it’s extremely important to get the “online” part right.

Blitz Brigade‘s gameplay is split between two campaigns: Multiplayer and Training. Training functions as a simple sort of single player option. Players must complete various objectives such as defeating waves of enemies using a stationary turret, or piloting a helicopter (yes, there are vehicles) and mowing down potential escapees. The better their performance, the more stars they earn (up to three), and once they’ve earned enough they can unlock the next group of levels.

Multiplayer is, well, multiplayer. At the moment, the only modes available are team-based Deathmatch (4-on-4), which is what most would expect, and Domination (6-on-6), which gives players points based on kills and flag control. Playing solo or with other people earns experience and coins, the former for unlocking new classes such as the Medic or Stealth, and the latter for purchasing better weapons and gear.

As is the case with pretty much any Gameloft game, Blitz Brigade is a looker. The characters and environments sport a nice amount of detail, and I was rather impressed that they created two completely distinct models for each class instead of simply coloring one red and the other blue. It also controls quite well thanks to a number of different control options and assists, although I could never quite get the hang of using the gyroscope option. The addition of vehicles is welcome as well since they have the potential to really ratchet up the chaos levels of a match.

Where Blitz Brigade starts to go wrong is in its online functionality, which is essentially the game’s entire focus. Simply logging on can require way too much time spent staring at that little progress clock while the server does whatever it’s supposed to do. And that’s just logging on. Actually playing is another matter entirely. Virtually every one of my attempts at starting a match resulted in a connection failure, which then forced me to log back on again; and the few matches I was able to start always crashed out on me before the end. 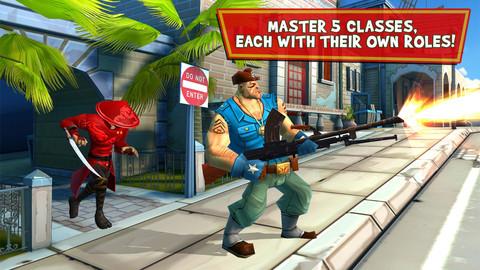 Training didn’t fare much better. Despite the total lack of any need for an online connection, I still have to be logged in to play solo, and it’s got almost as many connection problems as the multiplayer. I was able to start and finish a fair number of missions, sure, but I still managed to get booted (thus losing progress) due to server issues on a regular basis. Quite frankly I would’ve expected a lot better from a game that’s been designed from the ground up to be online-only: especially from such a prominent iOS developer.

Blitz Brigade has almost all of the basic elements it needs to be a great multiplayer FPS on iOS devices. It looks great, plays great, and has a fair number of unlockables and the like to keep players motivated. Unfortunately it’s missing the most important one: server stability. With a little time and an update or two, I have every confidence that this could be one of the iPhone’s biggest online shooters. But at the moment, it’s a total dud.