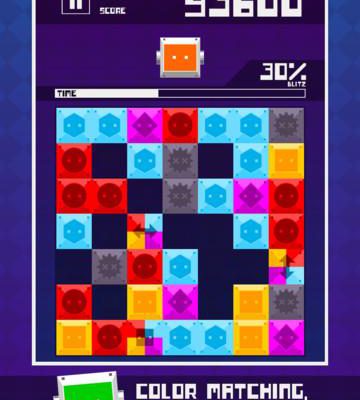 Blitz Block Robo shows us that robots are still incapable of having feelings – or having any fun for that matter.

The fundamentals of match-3 games have become so universal in the industry today, that even robots are now getting their bolts and antennas in on all of the fun. Blitz Block Robo takes traditional match-3 concepts and fuses them together with an interesting sliding mechanic, which results in a somewhat flexible, but still inherently rigid game board and player experience. But if robots are supposed to be good with such calculated maneuvers and automatic non-emotive actions as matching colors, then why does this latest spin on the successful genre feel like just another glitch in the overarching match-3 system?

In the game, players are presented with a familiar grid-based game board that is populated with dozens of colorful square robot tiles, which they’ll need to slide through open gaps and spaces to form like-colored block clusters. The slide mechanic of Blitz Block Robo is an interesting twist not normally seen in the traditional match-3 genre, and the fundamental gameplay is accented by a number of special block types that you’ve most likely seen somewhere else before. From multiplier bots, to bots that clear entire rows or columns, to dead bots that sit obtusely in your way, the game has every match-3 essential covered. My personal favorite so far are the Glitch Bots, which, when matched with a same-colored cluster of blocks, will completely switch up the colors of every block on the board, making them extremely useful for whenever you find yourself in a tight jam. 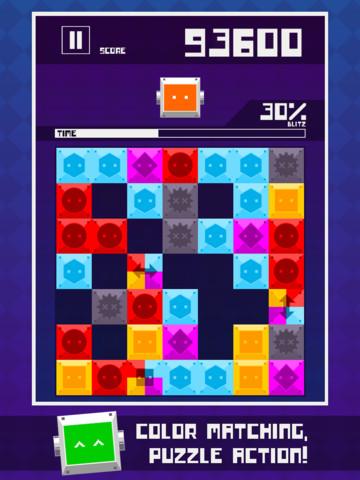 But the first thing you’ll likely notice that feels a bit “off” about the game is the means by which you’re required to clear same-colored block clusters on the screen. Once three or more robot blocks of the same color are touching, you’ll have the option of tapping once to select the entire cluster, or tapping twice to clear them from the board. Selecting a block cluster has no foreseeable purpose that I could figure out in all my time of playing, besides highlighting the connected blocks in an even lesser way than the visual cues of the game’s colors actually do. I would have thought that selecting a cluster would have at least allowed you to slide the entire connected chain around on the board, but you’re only ever able to move a single block at a time. In conjunction with this, being forced to tap twice every time you want to clear something from the board gets old and annoying pretty fast.

Maybe all the questionable mechanics about Blitz Block Robo wouldn’t have been so bad if there was actually a sense of progress, or any sort of goals to be working towards throughout the entirety of the game. Players will have the option of choosing between an Easy, Normal, and Hard mode, and then playing a simple arcade-style blitz game where the singular goal is getting a high score that’s worthy of the GameCenter leaderboard. As they fill up the completion meter to 100% by matching blocks before the timer runs out, they’ll be transported to the next level, which looks exactly the same as the previous one (save for a few newly added block types), and have to fill up that same completion meter again: over and over until either the timer runs out, or they turn the game off out of sheer boredom. There isn’t even a game store or any other incentives to keep playing, besides beating other players’ high scores. 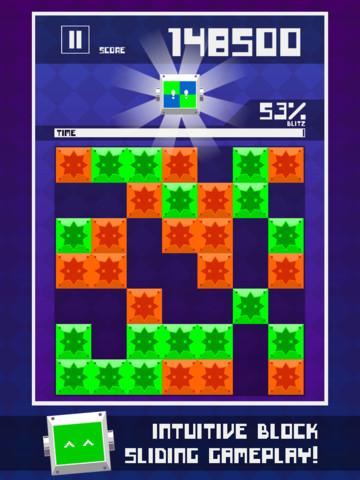 Of course, even as a simple arcade demo, Blitz Block Robo lacks any kind of addictive qualities or rewarding incentives that we’ve seen in other, more acclaimed minimalistic games on the App Store. Simply put, the game just isn’t all that fun, and everything about it, from its forgettable presentation, to its bland and clunky gameplay makes the entire experience fall well below average, at best. If you’re looking for a deep, varied, and enjoyable match-3 game, then you’re probably better off sliding right past this game on your mobile device, because the cold, robotic heart of Blitz Block Robo is devoid of any life or gaming amusement.