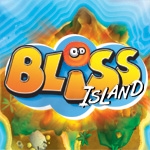 I love the weird and wacky. That’s why I’m a science fiction aficionado. So, I spend a lot of time watching the Sci-Fi channel. If you do the same, you’ve seen their unusual and, at times, bizarre commercials. You know, ones like the multi-armed ping pong players, spiky woman and dragon playing fetch.

In this strange tropical world, you assume the role of Hoshi the Zwooph, a fluffy blue creature with a long proboscis (i.e., snout) that you use to expel high-velocity air puffs. Quite handy for making clouds, the Zwoophs primary responsibility. But, "puffing" clouds is also somewhat boring. Hence, they organized a competition to show of their air-propelling skills. Take a deep breath and follow along!

A very accessible arcade game, Bliss Island is also compulsive. It’s one of those just-one-more-level titles that voraciously devour your time. Localized into six languages (English, Spanish, German, Dutch, Italian and French), it offers some very original characters and a distinctive feel. The developers packed in over 90 levels of off-the-wall gaming via five game types and two modes of play: Adventure Game and Challenge Game. Adventure takes you through one level at a time, while Challenge Mode lets you replay any level you’ve already reached in pursuit of a new high score.

Bliss Island is all about manipulating objects. Hoshi’s puffs of air, the principal play mechanic, are used to bounce or redirect objects on the playfield. For instance, you use these gusts to guide falling fruit into the mouths of hungry Jigoka Monsters by glancing off their sides as they fall. You also use them to smack boulders into each other so they collide and shatter. And, with these explosive bursts, you ricochet Chuzzle-like creatures into flowers to knock aphids off their petals. It’s reminiscent of the deflection and banking employed when playing billiards.

Of course, you accumulate points for accomplishing these actions. And, you gain additional points when you careen objects into each other. As an example, repeatedly bounce a fruit into a flower like a bumper and you rack up extra points pinball style.

That’s not all there is to play, however. At first, the number of items required to complete a level are small, such as feeding five fruits to the Jigoka or knocking ten aphids off the flower. Later levels and stages (each level has multiple stages) increase the item count required.

There’s also a time element on some levels. Fail to complete a task before time runs out and you lose a life. Lose three and the game ends (though, you can resume from that level). Allow a fruit or boulder to roll off the bottom of the screen and you lose a life, as well. The same holds true if too many aphids hop on your flower or if marching Brick Invaders (my veritable nemesis in this game) reach the bottom of the screen.

Moreover, as you advance, objects increasingly "get in your way" and make it more difficult to complete each level. Eventually, crabs-like critters, flies and other organisms will thwart your air-puffing efforts. Targets will increase, too. Instead of one Jigoka Monster to feed and a single flower to protect, you’ll have a pair. In addition, deadly opponents will begin to poke their heads out to halt your progress.

So, what makes this frantically blissful title stand out from its peers? Well, several things. Its distinctive 3D graphics are a key element. The game sports a unique look and supports high screen resolutions. I was able to play it at 1920 x 1200 widescreen, my LCD’s native mode. Audio, also quite unusual, stands out with its quality soundtrack and peculiar sound effects. Plus, the game’s easy to learn and addictive.

As for negatives, there’s really only one. Play can become very frustrating relatively early on for all but the most hard-core action fanatics. A long-time arcade gamer myself, I found the challenge becoming a bit exasperating once I reached level 20, specifically on levels infested with Brick Invaders. They’re a royal pain!

If you want a game permeated with fiendish, frantic and funky fun, Bliss Island will keep you coming back for more. Check it out for yourself, but don’t blame me if your productivity falls through the floor.