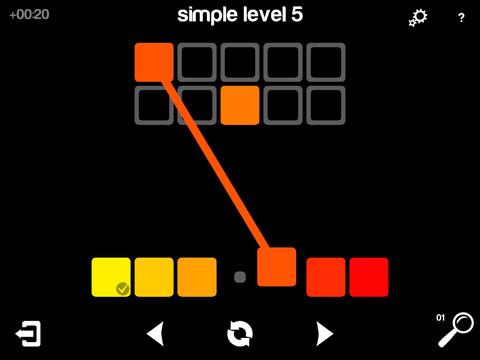 A hex color chart disguised as a brilliant mental workout.

The App Rule of Four states that the best game ideas can be described in a four-word sentence, such as: fling birds into pigs.  Get water to alligator.  Run until you die.  Blendoku is the latest in this long but succinct line of four word brilliances: put colors into order.

Even if I did just make up that rule, Blendoku meets all the other standard and outstanding requirements for an exquisite puzzle app.  First, its concept is simple and original.  You must place blocks of color on the correct location of a grid.  As in Sudoku, each grid begins with one or more blocks already in their correct, unmovable position.  A block’s placement is dependent on every other block it touches.  The mechanic that defines this relationship, though, is not numerical values or amount per quadrant, but the subtle blending of colors.

Every block that must be placed on the grid contains some hue level of at least one other block.  Puzzles vary from a single color scheme—ordering blocks from dark blue to light blue, for instance—to very blended colors—like beginning with black and blending all the way to hot pink.  The latter of these might progress from black to dark gray, medium gray with a touch of red, light gray with a hint of pink, and so on, with an even progression of colors creating the chain from color A to color B.

Of course, these “direct line” puzzles are only one variation of the grid arrangements in Blendoku, and another of its strengths: variety.  Unlike classic Sudoku‘s three-by-three board, your color-placing prowess is put to the test on an assortment of grids with an increasing number of blocks.  While early levels will have you placing five blocks in a straight line, you’ll soon be sorting up to 30 blocks on grids that are square, zigzagged, cross-shaped, and more.  Remember that every block must contain some hue of the other blocks it touches, on all four sides: this quickly evolves Blendoku from a fairly simple ordering game to a brain-bending puzzle.  You may have your predominantly blue-hued blocks in a row, but what goes above them?  How will you get from dark blue to bright red, and what goes next to each?  And where does this bright yellow block fit?

This almost maze-like aspect of the grids forces a careful consideration of not just the subtle progression of colors, but where you’ll begin placing them.  Pre-placed blocks often have numerous sides open, meaning you need to find not only multiple colors that blend into the starting blocks, but also decide which colors to expand out from them.  As in numerical Sudoku, there’s often a “best” place to start, but this place is not always obvious.

While this creates a consistently challenging experience, Blendoku also has the difficulty base covered.  There are four levels of difficulty available—Simple, Medium, Hard, and Master—and each features a staggering number of stages—150 apiece for Simple and Medium, 100 for Hard, and 75 for Master.  Within each difficulty itself, stages increase in complexity gradually, with intermittent breaks.  This means you may solve a large 20-color grid and then receive a smaller, 10-color stage next.  Not only does this provide a brain break, but it also helps prevent becoming discouraged if you cannot solve a stage and choose to skip it.

And if my experience is any indication, you’ll be skipping quite a bit.  But with so many levels, and every one available from the first time you open the app, there’s no punishment or downtime if you hit a wall.  There is a “solve” option that recharges once per day that will complete one block for you, but I never found a need for it as I could always skip and return to a puzzle later.

If you find they come in handy, additional “solve” recharges can be purchased for a one-time fee, which will also remove the painlessly unobtrusive ads from this free game.  Extra level packs are also available, which add another 150 stages to a specific difficulty for a very reasonable price, especially considering the massive amount of stages already provided in the vanilla app. 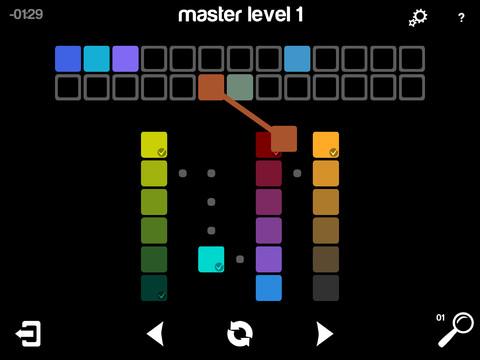 These level packs came with an update released this week that also added completion tracking to the difficulty select menu, a “perfect” score for solving a puzzle without making a mistake—on top of the already existing timer that tracks if you beat the world average on each puzzle—and a tightening of the controls on handsets.  This latter point is one of my only complaints: even with the enhanced controls, many of the puzzles beyond the Simple difficulty are too small to accurately play on a handset.  This really makes Blendoku a tablet game, which is a shame: it’s the perfect 1-minute or 1-hour puzzle break that’s nice to have with you at all times.

But for tablet players, Blendoku combines perfectly executed aspects of nearly every feature one could want in a puzzle game: a concept that’s easy to grasp but difficult to master, stages that are as varied as they are numerous, rewards for success and minimal punishment for failure, and updates to keep new content flowing.  Its four-word concept is simple, and it’s also simply great.