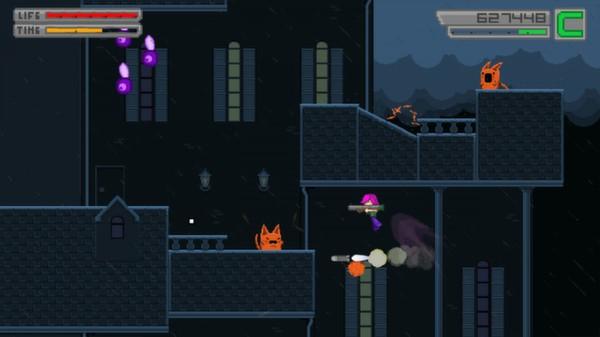 Bleed is utterly fantastic… if only there were more of it!

There needs to be more video games about playing as a hero who simply wants to be the best, and nothing more. Wacky Japanese game No More Heroes first laid out the concept of taking a list of people, finding them, and picking them off one by one. Now Bleed, an indie platformer from Ian Campbell, has taken the reins and beaten multiple “heroes” to death with them, cackling all the way. Don’t worry – we were cackling along too.

You are Wryn, a girl with quite impressive weaponry. There hasn’t been a true hero in the land for a hundred years, and all the old heroes have become nasty and non-hero-like from all the fame. With a pistol in each hand, and a list of heroes in the other, Wryn sets off to find them all and kill them one by one, so she can claim to be the greatest hero of all time. Wryn is a bit of a mover. She can jump, double jump, triple jump, and yes, jump another time after that too. Not only that, but she can wall jump, and go into bullet time, during which everything around her slows down, allowing her to aim more accurately and deal some serious damage.

And yet, even though our hero is so agile, she’ll still die over and over, and over again. That’s because Bleed is seriously difficult, especially on your first playthrough. Think a side-scrolling platformer mixed with a bullet-hell shmup, and you’re partway there to understanding exactly how many times you can expect to die… and that’s on normal difficulty. But it’s worth pushing through the hurt simply to see the wide variety of enemies, level design, and general ideas that have been pumped into the veins of Bleed. The game constantly surprised me throughout, from the completely unique settings for each level, to the multiple boss battles you’ll be facing.

Ah yes – the boss battles. Each level has two bosses to beat, the first a sort of guardian figure halfway through, and the next the “hero” you came to destroy, each of whom will always meet you at the end of your run. Each of the bosses brings back amazing memories of classic 90’s 16-bit bust-ups, not only for being seriously entertaining, but also for being seriously difficult. Bleed is also rather humorous and most definitely full of life. From the initial introduction, to the crazy “heroes” that Wryn encounters, it’s a delight to take control of such a well-presented and thought-out experience. 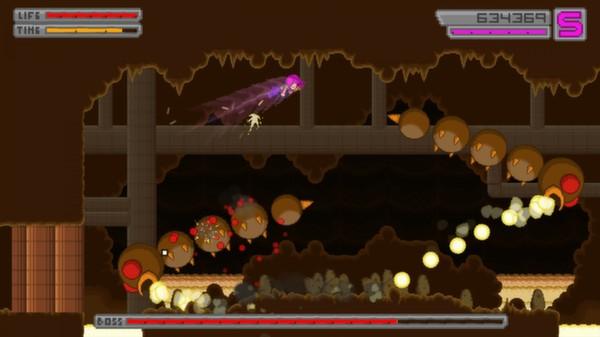 At this point, I really need to mention the controls. See, for the first half hour, I didn’t “get” the controls at all. They feel wonky, and just not entirely right. Although they eventually get the job done, the controls just aren’t tight enough, and really start to take away from the positives of the experience. Doing multiple jumps through the air, for example, can be really tricky, while wall jumping is so odd that there’s actually a tickbox to turn it off in the options if you so choose!

But after around 30 minutes, the controls finally gel, and you become a lot more comfortable. They’re still not fantastic, mind you, and could do with a great deal of work – but in a way, it makes multiple playthroughs of the game more interesting. On your first playthrough, you’ll die loads of times mainly because the game is hard, but also because the controls are icky. On your second playthrough, suddenly everything feels so much easier, and you’ll switch up to Hard difficulty to see how much you can shake the game up. 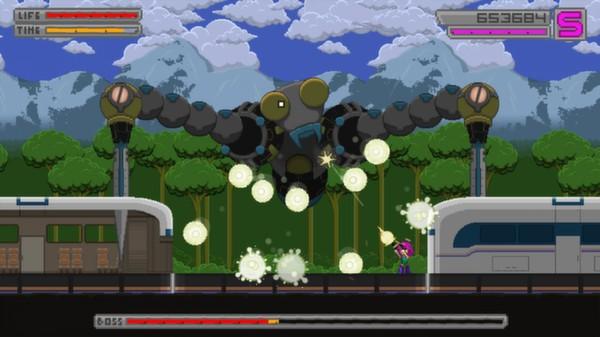 But here lies the other issue – Bleed is an incredibly short game. You can easily finish the story mode in around 30 minutes – i.e. the amount of time it takes to get used to the controls – and while there are a couple of extra modes and extra difficulty settings, you aren’t really going to see any new content beyond that. You’ve got local co-op to play through if you’re into that sort of thing, and the Arcade mode allows you to upload scores online (although I still can’t work out how to view the blasting things!), but realistically, you’re not going to get more than a couple of nights’ play out of Bleed before you decide to move on.

It’s a huge shame, because with just a little bit more oomph here and swagger there, Bleed could have truly been one of the most essential indie games of this year. As it is, Bleed is still masterful, exciting, and well worth a play – and I truly hope it gets some form of sequel.