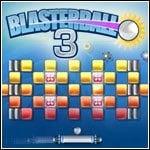 Two types of forces drive change in this world: Invention and innovation. Like most brick-breaking arcade outings, the multimillion-selling Blasterball series relies on the latter to captivate and enchant. Three installments into the critically-acclaimed franchise, we can see why originality continues to take a backseat to pure fun and playability. Blasterball 3 doesn’t do all that much new per se – it just takes the same, time-honored block-smashing formula you know and love and does it better.

No mystery surrounding the setup here. There’s not even a featured storyline to muddy the waters. (Note to the designers: Adding one for amusement’s sake would’ve been a nice bonus.) Moving an on-screen paddle left/right using the mouse, you simply keep batting a ball at varyingly-shaped grids of destructible objects – modeled after watermelons, bees, umbrellas and other familiar outlines – until all crumble. Once done, you’re greeted with a beautiful display of virtual fireworks and then it’s off to the next stage.

Fail to keep balls in play, though, and you’ll lose a life, with the game ending when all are gone. Of course, you can always pick up right where you left off without penalty. (Besides losing your current score, that is, and possibly a slot on global ranking boards…) Despite robbing the game of expert-level challenge, this caveat actually serves to minimize frustration. Happily, difficulty levels are so finely balanced between stages that you won’t breeze through the adventure anyway.

Heaven knows, there’s incentive to: The title is chock-full of pleasing little surprises. If you’re not busy bashing down triangular corner pieces or thin, rectangular building blocks, you’ll have to contend with enemies – gyro-encased spheres, glowing hexagons, etc. – who use deflector shields to dynamically alter balls’ trajectories. Options to collect letters spelling "BLASTERBALL" for a massive bonus, access secret bonus levels and assault blocks which reappear seconds after destruction or switches that summon more obstacles into being upon activation are just the beginning. Later levels introduce bricks that cause game pacing to hasten, explosive bomb tiles and even giant bosses you mush bash balls repeatedly into to destroy such as a bouncing electrostatic sphere and ceiling-mounted globe protected by bubble-blowing pipes.

All this before we even get on the subject of power-ups, of which there’s a staggering 24, divided into positive, negative and neutral varieties. Think collectibles which shrink your paddle, bonuses that give balls the power to cut through any material and extras capable of awarding you the power to shoot arcing lightning bolts. Amazingly, one can even simultaneously benefit from up to five special effects or score multipliers at any given time. Pair replication powers (which cause every one ball in play to instantly grow a regenerating twin) with an 8x multi-ball collectible, and you’ll literally watch dozens of skittering spheres suddenly storm your monitor. Nor does the action slow for a second. Frankly, it’s amazing how smoothly the program runs in either windowed or full-screen mode, even with so many objects zigging and zagging across one’s desktop.

The presentation’s top-notch too, with a bouncy selection of synthesizer-heavy, techno-tinged tracks and futuristic sound effects on display alongside simple, yet ultra-shiny graphical assets. Visuals are neither as heavily stylized nor imaginative as in competitors, but exude so much minimalist charm you’ll scarcely mind. (Except for menus and sidebars, which look like something from a hastily-thrown-together, high-school programming project…) Support for importing MP3 digital audio and song playlists only ups one’s enjoyment. Although, in retrospect, and we speak from personal experience here, classic ’80s rap hits don’t necessarily made the best backing score.

More shocking still, WildTangent also found time to incorporate a fully-functional level editor. Anyone can hop right in and utilize its intuitive, point-and-click interface to begin crafting first-rate scenarios – no design experience required. Better yet, users can share their creations via the Internet as well. Between homebrew hacks and the outing’s 100 base levels, that’s an awful lot of replay value on offer.