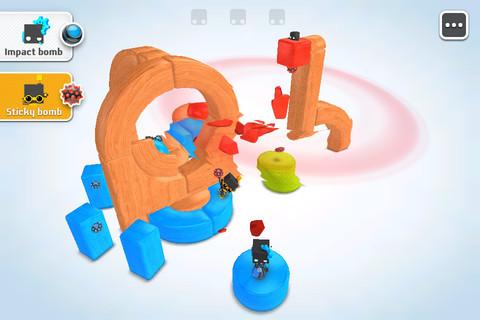 The cutest robot cowboy this side of the pacific

Blast-A-Way is a devious game, and that’s something every player must come to terms with. If it wasn’t, it wouldn’t bombard you with colorful obstacles and force you to rescue the poor, innocent “Boxies” that inhabit its world. But you can’t be too mad at it, really. The game only does these things because it loves you, and wants you to have fun. Isn’t that sweet?

A puzzle-platformer with a focus on controlled chaos, Blast-A-Way challenges players to navigate a world overwrought with obstructions, each of which only responds to the correct color of bomb. And while this oftentimes means throwing a green bomb at a green structure to destroy it, that’s far from the end of it. Some bombs create things like portals, which only activate when in contact with the corresponding color on the map. It’s a lot to juggle, but the game does a good job of acquainting you with new elements as they appear.

“ The stranded Boxies provide an additional layer of difficulty. There are three in each level, and they’re frequently stuck to or resting atop sections you need to blow up to progress. By nature they fly towards the level when near an explosion, but it’s still possible to blow one away with a misplaced bomb. Fortunately, it isn’t required that you pick up every single one. But you need a decent chunk of them to progress to later areas.

Levels come in separate packs, and each one features its own aesthetic. You begin in a world composed of wood, but progress to ones made of metal, fabric, plastic, and stone. There’s a charming simplicity to each of these, and many of the levels look as though they were made from blocks and knick knacks found in a child’s toy box. It added an element of playfulness to the entire experience, and made it hard for me to feel frustrated or distraught during some of the more difficult puzzles.

Though far from awful, the movement controls in Blast-A-Way have some problems. You tap down on your character and drag to wherever you’d like him to go, which results in your finger occasionally obscuring what’s directly in front of you. This would have been more frustrating, but it’s impossible to fall off any given level, no matter how closely you skirt the edge. Furthermore, character placement isn’t all of that crucial. You need to get from point A to point B, sure, but where you are in relation to obstacles doesn’t play much of a role in how they explode. It feels as though the developers knew the limits of a touch screen interface, and did all they could to squash any troublesome factors. 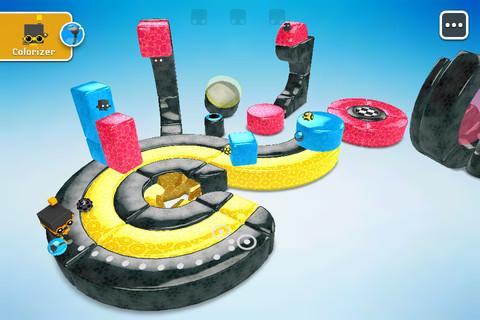 “ Even with the control issues, I had a permanent grin during my time with Blast-A-Way. It builds up to more difficult elements — like portals — with an incredible level of tact, and it respects the player’s intelligence in a way you don’t always see in the puzzle genre. Its charming atmosphere and endearing personality are similarly rare, and it took a tremendous amount of self restraint to not finish the game in one sitting. I stayed strong, and finished it in two instead. That’s better, right?