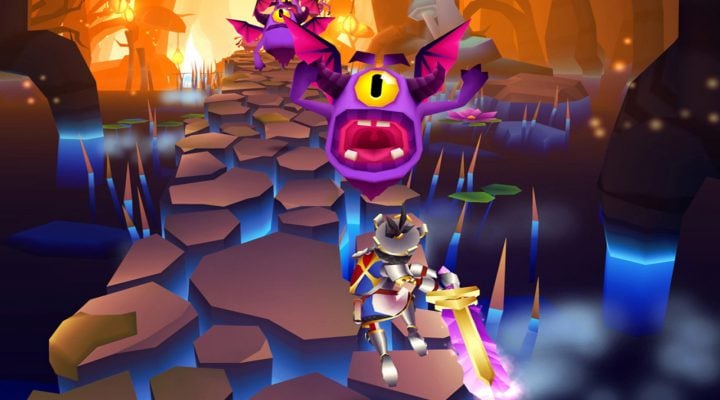 Lots of fun stuff to collect.

Very easy to pick up and play, but challenging to master.

Usually I try to start my reviews with a personal anecdote, or a bit of back story to my previous experience with a developer, a series, or a genre as a whole. But this time around I’m skipping all that just to be able to say “Go play Blade of Brim as soon as possible,” as soon as I can.

So, with that out of the way: go play Blades of Brim as soon as possible. The game is that good.

Blades of Brim has everything that marks a great mobile game; it’s easy to play, it has (usually) short bursts of gameplay, it has a fair and respectable IAP system, and has plenty of things to work towards that are not just mindless farming. 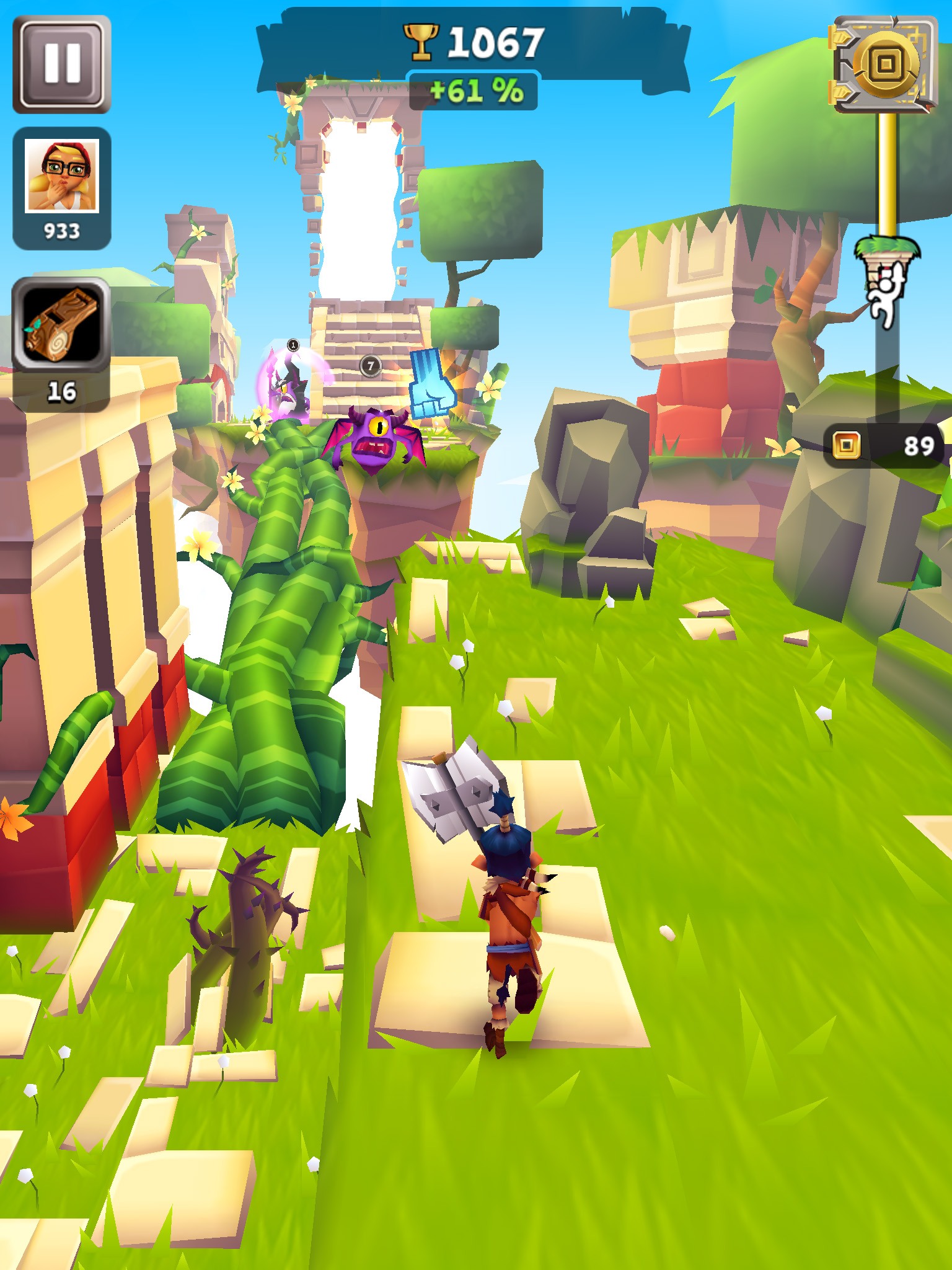 As a true endless runner, a round in Blades of Brim only ends when you are knocked out. There are no levels in the game and each experience is randomly generated, but progressive to your gameplay experience as a whole. As the player makes their way through their run they will collect coins, gear, items, and even pets. The player simply has to make it to a checkpoint in order to turn in their loot and save it towards their character’s overall progress.

Blades of Brim doesn’t stop at these checkpoints, though. When you pass through the checkpoint, a little animation plays that shows the game tallying up your newly collected loot, and you get a few seconds of downtime as you run through a safe area. The checkpoint system really helped me to relax while playing, because the checkpoints reduced the risk of me losing very much loot.

In between the checkpoints are dozens and dozens of purple monsters. From basic grunts to giant Crushers and pesky wizards, these purple fiends exist for one reason: to stop you in your tracks.

Luckily players are armed with a weapon that can make quick work of these foes. The combat controls mirror the movement controls, which are intuitive: vertical and horizontal swipes for jumping/sliding and attacking/dodging respectively.

Air combat gets a little clunky though. Some enemies have wings that allow them to hover off the ground. The only way to dispatch them is by leaping up and striking them. One at a time, they’re simple to clear out. But when you have multiple flying enemies, mixed in with grounded enemies, things get pretty tough. I found it frustratingly difficult to attack strings of flying enemies as the game is finicky with detecting if I’m jumping to jump, or jumping to strike. Attacking is all about timing, but unfortunately, timing is difficult when your bouncing through the air, unable to see exactly where you’re going to land.

The weapons can be upgraded for small stat bonuses by using the gold that is collected during runs. If you’re more of the gambling type, you can buy a treasure chest with your gold that could contain anything from weapons to pet whistles. 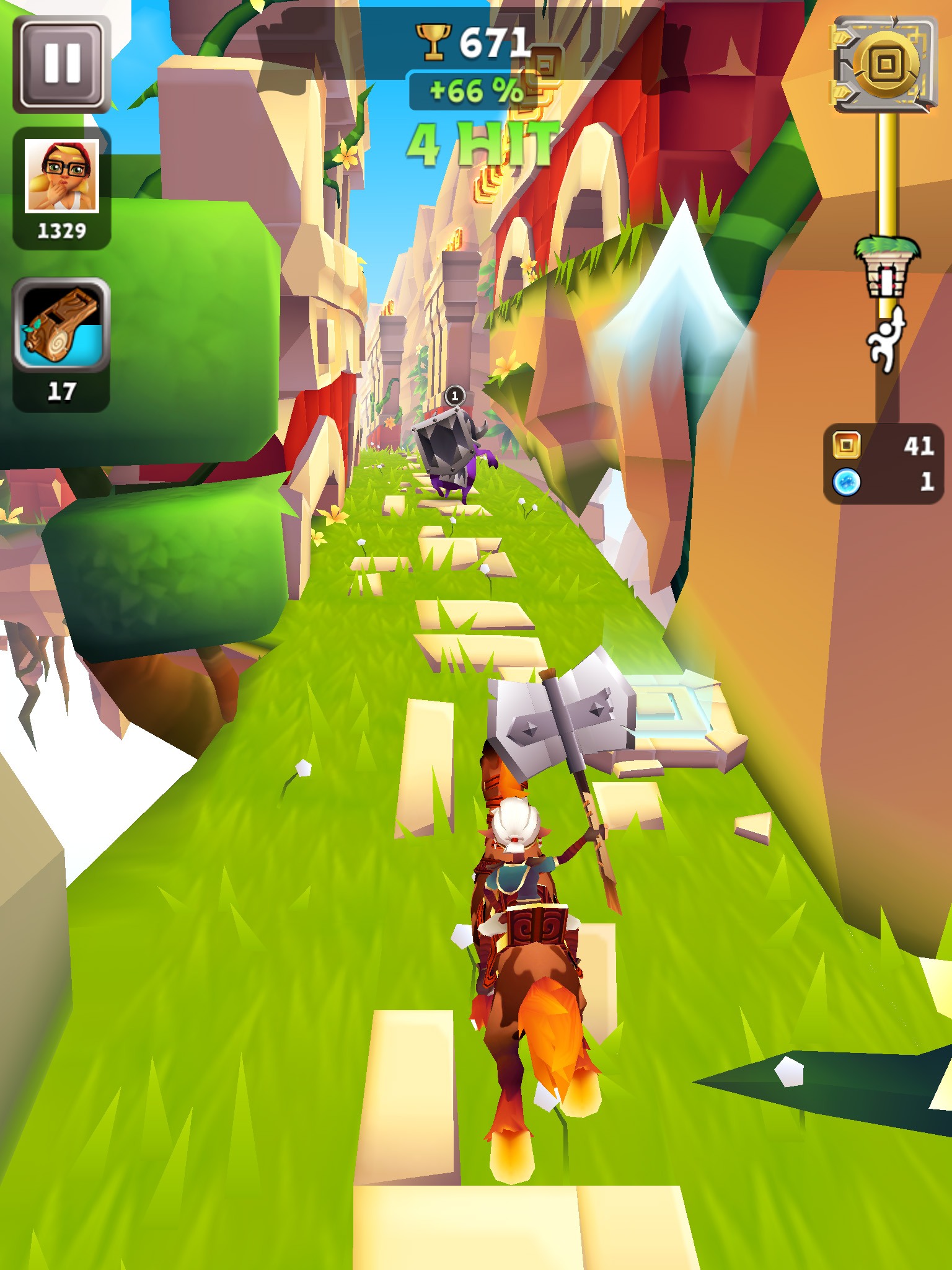 The pet mechanic of Blades of Brim is an interesting concept, but I ultimately never found it too useful. You get pet whistles that you can use to summon a pet that you then ride upon. Everything functions exactly the same, except, when mounted, you can double tap for a special ability that clears out oncoming enemies.

There are a number of pet types to collect. Currently I have a silver wolf and a fire-horse. They’re cool, but I’m hoping to pick up a dragon pretty soon.

On top of collecting pets, players can collect other heroes and specialized gear for their heroes. That’s lots of things to work towards, and it serves as enough motivation (beyond the fun gameplay itself) to keep me playing. 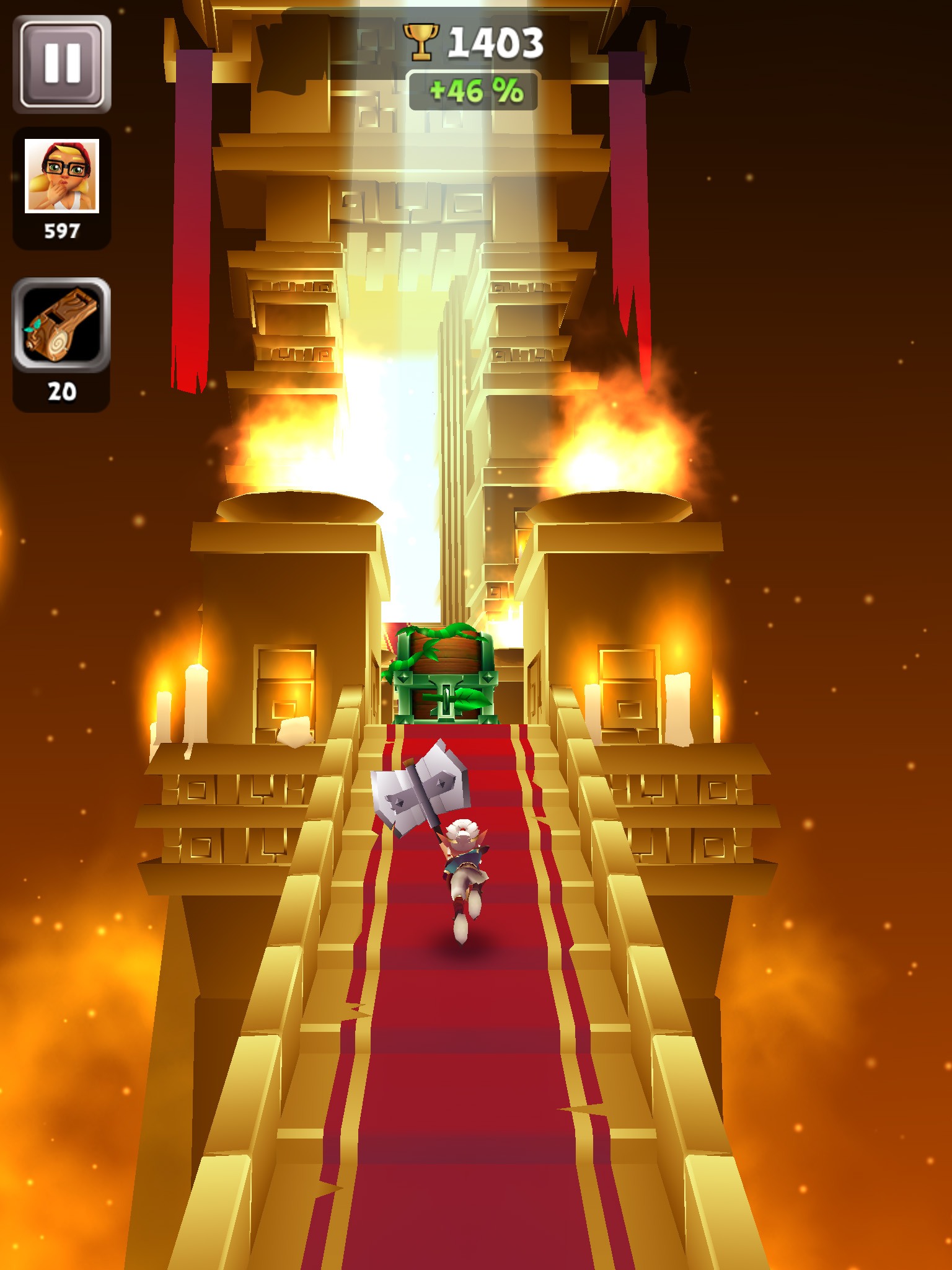 One of my favorite things about Blades of Brim is how big the game feels. Most endless runners feel claustrophobic, with three lanes and the occasional side-path that branches off for a bit. In Blades of Brim the randomly generated levels are filled with branching pathways, multi-tier tracks, and portals to completely different locals. Everything flows seamlessly. One moment I’m running through a cave, the next I’m outside running through the skies on giant vines. The level designs are all impressive looking, as well.

Blades of Brim is tough to put down. I spent the entire weekend playing it here and there when free time allowed, and I’m happy to see a clear improvement in my skills within the game. Put in the effort and you will be rewarded by being able to pull off some pretty impressive, parkour-like stunts. Blades of Brim is one of the best endless runners I’ve come across. It’s a solid all-around gameplay experience that everyone should try out.

You Must Build A Boat Review: Ship of Dreams