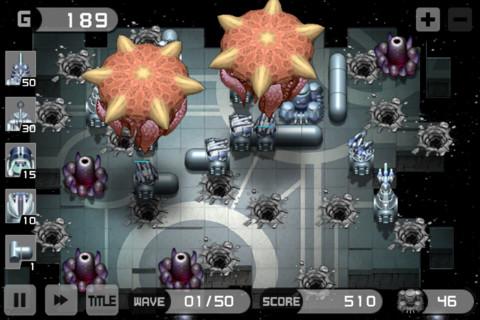 Tower defense games have been done to death on smartphones over the last few years, so it takes something really special in that genre to get our attention nowadays. Telling us there’s a tower defense game developed by Hironobu Sakaguchi, the father of the Final Fantasy series? That’s certainly one way to pique our interest.

The second iOS release from Sakaguchi’s own development studio, Mistwalker, Blade Guardian does two things that help stand out in a sea of similar mobile tower defense games.  First, it features the titular Blade Guardian – a character that provides a nice offensive counterweight to the defense heavy nature of TD’s.  Second, it’s really really hard.

Challenge is actually something that most TD veterans look for in a new release, so calling the game difficult is more of a celebration than a complaint.  And it’s not unfairly hard, either.  Blade Guardian challenges you through its smart design and great levels.  It’s blisteringly difficult, but only in that way you want a game like Blade Guardian to be.  As Martha Stewart likes to say, “it’s a good thing.”

Level layouts are more akin to Fieldrunners than they are to Bloons TD.  Rather than following a set path, your enemies have free range to move anywhere on the playing field.  They’ll always try to make a beeline for your base, so you’ll need to create a wall of towers to steer them in the direction you want them to go.  In a neat twist, you’ll actually be able to build walls in addition to weapons towers.  Walls are much cheaper than weapons, and give you a lot of leeway in making your maps as labyrinthine as possible.

Unlike most FieldRunner-style games though, your enemies won’t be coming from a single entry point.  In Blade Guardian, they’ll be able to spawn from different camps set up around the map. As a result, you’ll need to build defenses that can handle enemy approaches from all sides.  This creates a helpful secondary objective in addition to protecting your base – destroying enemy camps.  And for that, you’ll need to call on the help of the Blade Guardian. 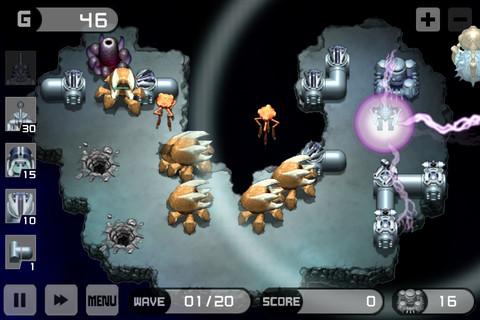 The Guardian (or guardians, as you can have more than one in play at a time) arrive via a floating alien creature periodically throughout the game.  You’ll need to tap on that creature a bunch to make it pop (or hope it flies through your network of deadly bullets and lasers) to drop the Guardian into your employ.  On its own, the Guardian will try to walk to the nearest enemy camp and try to obliterate it with firepower, though it will stop and attack any enemies it encounters on its way.  It’s a great touch, but it’s not the only thing the Guardian can do.  Unfortunately, this is where things get a little sticky.

If you’d rather take control of the Guardian yourself to wreak maximum havoc, you can turn it into a ball that will destroy everything it rolls into.  And it really rolls.  You’ll be controlling it via tilt, but it always feels like the sensitivity is too high, so controlling the Guardian’s rolls is haphazard at best.  On the plus side, it’s going to destroy every enemy and camp it touches; but it will destroy your own defenses too.

My impression is that, rather than poor implementation, the tough to control nature is there by design.  It’s as if the game is saying “if you want to drop the atom bomb, you’re going to pay the price.”  As a result, I found myself using this mechanic sparingly.  It’s the Hail Mary pass of Blade Guardian.

The only other downside was the game’s lackluster presentation.  Blade Guardian doesn’t look technically bad, but its visuals are pretty bland and generic.  It’s the grey of space mixed with some fleshy alien baddies — nothing we haven’t seen before.  And the lack of in-game music didn’t help things either.  Still – the gameplay here was challenging and tight enough to certain overcome any sound and art hurdles the game might have.

With great level design and some unique twists, Blade Guardian is an absolute must-play for fans of tower defense.  It’s not a flawless game by any stretch, but with so many competitors on the market, Blade Guardian does more than enough to set itself apart from the crowd.