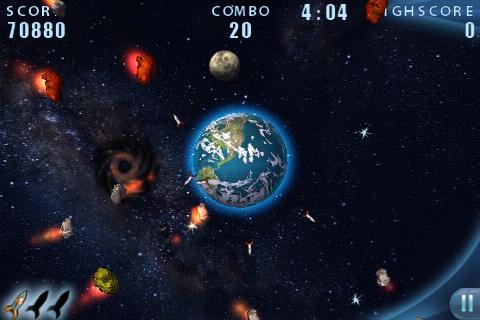 Saving the Earth from incoming asteroids can be a tough job for physicists, scientists and military – even if they’re working co-operatively. Or saving the Earth can be done with just your finger. Black Hole is a great arcade-style app for the iPhone that lets you be the savior of humanity without all that science work.

The premise behind Black Hole is deceptively simple. Asteroids are flying at the Earth in the middle of the screen. Every time you touch the screen, a black hole appears, changing the gravitational pull around the asteroid. This lets you guide them not only away from the Earth, but also to have them collide, thus saving the Earth and earning sweet bonus points.

On top of your basic asteroid, there are three special asteroids: a yellow asteroid which releases a lightning bolt to destroys nearby asteroids, a blue asteroid which releases a small ice field freezing anything nearby, and a red asteroid which activates a missile defense system on Earth which will seek and destroy up to five asteroids onscreen. Finally, if you tap the Earth, it will send out a shockwave, acting like a smart bomb. The moon also continues to orbit the Earth, helping to destroy missiles along the way. You win the level if you can keep Armageddon at bay while a timer ticks down.

While it sounds like there’s a large arsenal at your disposal, those asteroids start flying fast and furious. There are 15 levels in the game, and while the first set of five are easy, things get tough pretty quickly. It’s not unmanageable, mind you, but your arcade reflexes will be put to the test.

Black Hole is a simple game, but it’s well put-together. The graphics are clean and detailed; you’ll have no trouble discerning different asteroid types or seeing them on the screen. The background music is a looping rock soundtrack, and it adds to the adrenaline-pumping action onscreen while never managing to get tired.

On top of all the action there are also achievements through Crystal, as well as online leaderboards. With many achievements to unlock, you’ll want to go back to levels you’ve already completed to earn that higher score.

Unfortunately, that’s about all there is to do in Black Hole. Other than an endless mode, the 15 levels are all accessible from the get-go (though you will lose very quickly if you try to skip straight to level 15). Outside of trying to unlock those achievements or get a higher score, there’s isn’t much else to the package.

However, as a fun, straightforward arcade experience, Black Hole is a great out-of-this-world game. The mechanics are solid, the presentation is great, and the gameplay, though short-lived, is addictive. All that’s left to save the world is your finger.