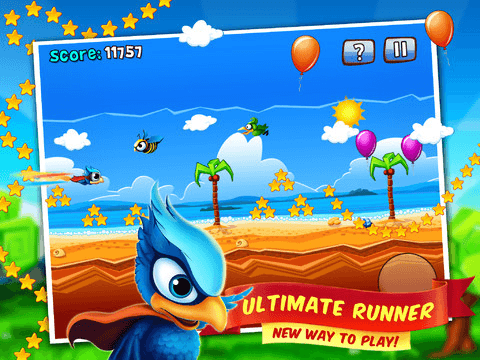 Not quite angry; just a plain old bird

When Bird Mania was first released on the Nintendo 3DS eShop almost a year ago today, it received mix reviews from fans and critics alike. While some applauded the sharp visuals and fast gameplay, others criticized the severe lack of things to do in the game. Unfortunately, not much seems to have changed in this iOS port. At its core, Bird Mania is a simple endless runner game, but one that shows us that sometimes simple isn’t always necessarily better.

In the game, you play as a tiny bird named Mojo, and are tasked to fly through the scenery and collect as many stars and balloons as you can to boost your high score. Mojo will automatically fly across the sidescrolling screen, and you control his flight path by moving him up and down throughout the environment. Without a doubt, your biggest adversaries here in Bird Mania are the trees, which tend to blend in with the actual scenery, and let you pass through their trunks, but not their leaves. You have three attempts in each game, and then your scores from each run are totaled up to calculate your final score. But say you really flubbed up your third run: then you’ll have the option to redo your last attempt by spending one of your currency hearts.

The controls in the game are extremely precise, and even the slightest movement of your thumb will sharply move your bird along the screen’s vertical axis. Other birds and bumble bees will be flying at you in the opposite direction, but tapping on the dash button will make quick birdfeed out of them, and increase your multiplier for even bigger scores. Besides this, there are very little gameplay elements to be found in Bird Mania. The only real noticeable one is the day and night mechanic, which slows down your bird to normal speed again when the time of day changes, but does little else to affect the overall gameplay. Sometimes the stars and balloons will be strategically placed to form an environmental smiley face, but that’s about the extent of the personality and charm to be found in this lackluster runner. Unlike the 3DS version of the game, there is no attempt at a narrative, and no motivation for why the other birds of the meadow are so intent on attacking you.

Whenever you really start to get some distance in a run, the game begins to move at such a dizzyingly fast speed, that it almost makes you feel sick if you try to keep up with the blistering pace of the sidescrolling backgrounds. I’ve never suffered from motion sickness before, but there were certainly a few times that Bird Mania almost made me throw up all that birdseed I ate for breakfast. I can’t imagine what it must have been like to play this one on Nintendo’s 3DS hardware. A few times I somehow managed to get past the main meadow area, and found my bird flying over a quick ocean span before arriving at a bright and sunny beach. The sandy new environment was a much welcomed change of scenery, and the background transitions between the different locations were surprisingly seamless. The downside is that it takes some serious concentration to even get to this point, and I was never able to last long enough to see if there was another environment beyond this. 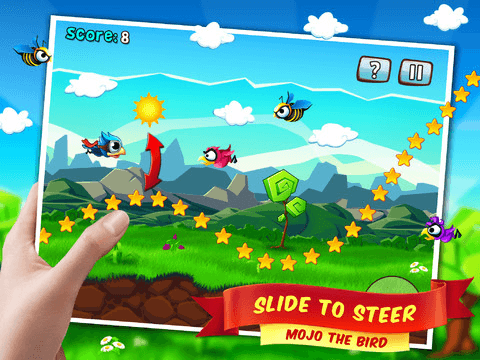 But I think the biggest reason why Bird Mania fails to find that lasting appeal of a great mobile game is because there are no real incentives to keep playing after the first five minutes. Each round in the game is exactly the same, and the complete absence of any long-term goals or optional missions besides beating your own high score leaves the game feeling very thin, and more like a tech demo than a full-fledged release. The game store is also incredibly underutilized, which allows players to purchase additional hearts for more do-over attempts, and nothing else. No special power-ups, no character customization, no nothing. The game will notify you whenever you managed to top your high scores, like the longest distance travelled or the most stars collected, but these achievements feel far from rewarding in the grand scheme of things.

Despite a nice presentation and fluid performance on the iOS platform, there is just not enough to do here in Bird Mania, and the bare minimum of things you can do in the game are just not all that fun either. So those early birds can have this bland worm: I’d rather spend the day in my nest instead.