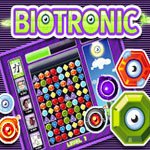 When Bejeweled debuted back in 2001, the public had never seen anything like it. If one were to pinpoint the moment that gave birth casual games, it would be hard to argue that wasn't it. Over the years we've literally seen thousands of games that have copied the match-3 formula that Bejeweled introduced, some of these greatly improving on what came before, some of them not. Biotronic is a free Facebook match-3 game that, despite its popularity, does nothing to grow the genre.

Biotronic plays like a carbon copy of Bejeweled 2's action mode. You'll need to make matches of 3 or more like colored “biotronics” before the power bar runs out of energy. The energy will drain over time, but making matches adds energy to the bar. The object here is to fill the bar completely and advance to the next level. Letting the bar run dry will end the game. Each level the bar will drain faster and faster, offering up more and more of a challenge.

No word of a lie – the above paragraph could literally have been cut and paste from a review of Bejeweled 2.

But that's not to say that Biotronic doesn't do some things a little differently. The game has its own unique style and vibe. Colorful animations and a spooky soundtrack really help to set the mood. The biotronics on the board may be made of bright shapes and colors, but they also have eyes that blink from time to time in an eerie tableau.

As you fill your power meter, a scene will unfold on the right side of the scene where something is being built. Some levels may feature a giant robot, others the sphinx. If your meter begins to drop the progress made in these buildings becomes undone. While purely cosmetic, the little scenes that unfold based were a nice touch that helped round out the game's personality.

The music in Biotronics seems to be the real star here, offering up a hollow, creepy vibe I haven't heard in years. Old school gamers will definitely notice a striking resemblance to the scores from the earlier Metroid games. The visuals and sounds combine to create a real “horror film on a space station” kind of vibe. It may sound strange, but it really works with the seemingly mechanical nature of the blinky-eyed biotronics.

While the game offers three modes of play, the gameplay doesn't really change enough from mode to mode to offer any variety. In addition to the “Play!” mode described above, you'll be able to play without the stress of the power meter in “Practice” and you'll get to call out your friends in “Challenge.”

Challenge will let you issue a challenge to any of your friends already playing the game, essentially calling them out and saying “I'm better than you at Biotronic!!” Your friend can choose to accept your challenge or runaway, but the game will unfold the same way regardless. Once you issue the challenge you'll proceed to play the game exactly as you would in Play mode. Should your friend accept the challenge, you'll be notified of who had the better score once they've completed their game.

We're all for any game that adds more than just social leaderboards in Facebook (yes, Biotronics has those too), but it would have been nice to see something different in terms of the actual gameplay.

Even though Biotronic fails to bring anything new to the match-3 formula, that doesn't mean it's not worth playing. A tight presentation, fantastic little animations, and some minor social elements make this Bejeweled clone one of the better ones on the market.If you can't stop playing Bejeweled Blitz on Facebook, Biotronic is definitely something worth adding to your playlist.