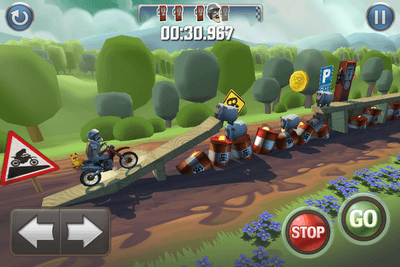 Bike Baron is a game that I feel like I’ve been waiting my whole life for. Well, maybe not my life, but at least the life of the App Store. A portable version of a wacky motocross physics challenge like Trials 2 or Joe Danger has seemed like a perfect fit for the iPhone since day one, and yet every time a developer tries, it’s either a major disappointment (Xtreme Wheels), or so wonderfully unique that it strays too far from that original formula to scratch the same itch (Extreme Road Trip, Mad Skills Motocross).

With Bike Baron, developer Mountain Sheep have sacrificed originality for perfection. To date, this is the single most satisfying homage to the Trials 2 style of physics challenge that we’ve seen on the App Store.

For those not in the loop, the idea behind this style of game is fairly simple. Players will tilt a motorbike forwards and backwards by using a left and right button, and will accelerate and brake using another set of buttons. Using only these four basic controls, players will guide a biker through an obstacle course that makes Evel Knievel look like a two year old on a tricycle. You’ll push left to have the biker pull up on the bike, push right to have him push the front end down, and combine these with proper acceleration and braking to make perfect landings, optimize speed and – more importantly – keep the titular Bike Baron from crashing and burning.

A game like this will live and die by two things alone – physics and course design. In both cases, Bike Baron surpasses every expectation. The physics may be cartoony, but they feel intuitive and easy to control. The Baron never does anything you wouldn’t expect him to. And the course design? Simply magnificent.

As you progress through the game, courses range from easy to brutally difficult. Admittedly, there seem to be more that are brutally difficult than simple. Each course gives you three objectives – one is simply finishing the race, one is finishing in good time, and one is collecting all of the coins scattered through a level. As you get further into the game, some of these will be swapped out for new objectives – like completing a certain number of flips. What’s great is that for every objective you complete you’ll earn a star, and each course only costs a single star to unlock. So even if you’re having trouble nailing all three challenges per course, you can still skip ahead to the next one.

In addition to the great gameplay, Bike Baron also offers a pretty user-friendly level creation mode to let players design and share their own courses. It’s a fantastic mode – and honestly, I think I spent more time fiddling in here than I did unlocking stars – but the game is pretty limited in how you can share these levels. Playing other people’s courses requires a four digit code, and there’s no central user-level store to visit and see what’s out there. Mountain Sheep are highlighting and sharing codes for the best user content on their blog, but that’s just not the same as offering it directly in-app. 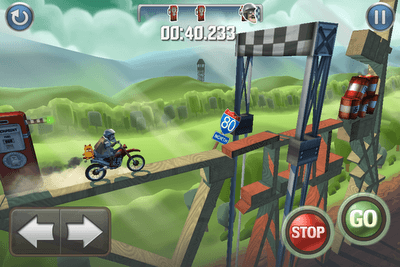 And while the game is dripping with style and polish, it’s hard to not notice that the style and polish owe a lot to Joe Danger. Both offer a slightly sideways perspective, and while the art is somewhat original, it really just ends up looking like a stripped down version of the Hello Games classic.

In a sense, Bike Baron lacks originality. But when it comes to the outstanding level design, high visual polish, and uniqueness in being the only great game of its kind on the App Store, it’s hard to criticize the developers for being influenced by some great games and wanting to perfect that formula for a different platform. Say what you will about its copycat nature, Bike Baron is destined to become an iPhone classic.