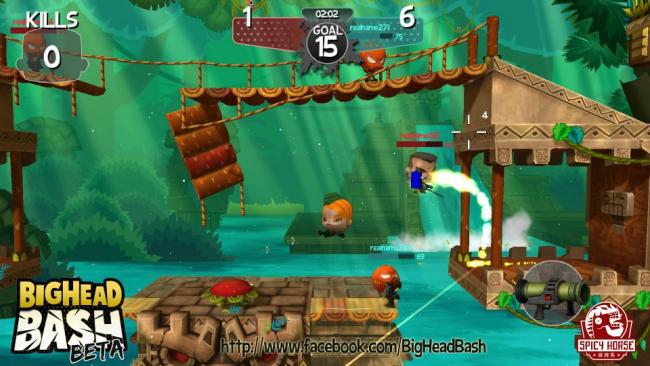 Calling someone “bigheaded” suddenly becomes a compliment as we step into the world of BigHead Bash – a Soldat-inspired side-scrolling multiplayer shooter set in a toyshop. As bullets fly and kill streaks rise, heads expand until they’re fit to burst, making for a far easier target and levelling the playing field.

BigHead Bash doesn’t add much in the way of innovation to the genre, but it’s vibrant, fast-paced and handles well. The game is currently in open beta on Kongregate, and we’re hoping the issues listed in this review will steer the development team in the right direction.

A toy shop has sprung to life, and a variety of soldiers, robots and other such play things have grabbed weapons and are looking to gun each other down. Two teams go bighead-to-bighead against each other on a series of 2D arena levels, and the team with the most kills comes away as the victor.

The controls are incredibly simple and make for a perfect pick-up-and-play challenge. The mouse aims your gun while left click shoots and right click changes weapon. The keyboard then moves your characters, and allows for jumps, double jumps, drop downs and reloads.

The key to being the best at BigHead Bash is the critical hit manoeuvre. If you are aiming on an enemy’s head when you fire at them, you’ll give them far more damage and kill them much more quickly. This is easier said than done if they are jumping all over the place, and mastering your aiming is a real challenge.

As you rack up kills, your head grows, making you an easy target for critical hits. However, if you can reach a three-kill streak, you can then hit the Shift key and activate Bash mode, which essentially makes your ridiculously strong. Once your rampage is over, your head then shrinks down to normal – hence, the idea is to quickly rack up three kills, and Bash away.

There is plenty of customization and RPG elements to add to the fun. As you get kills, your character will go up in rank and you’ll be able to purchase more powerful weapons and silly heads for your character, so you can show other players just how good you are. There isn’t a great amount to purchase at the moment, but we’re assuming more will come as the game leaves beta and launches fully.

In its current state, the game can be rather confusing at times, with not a great deal of explanation given. There are tickets and coin, but it’s not immediately clear which you can get for free and which you need to buy, or which is the more valuable commodity. There’s also a strange renting style system, by which you rent out weapons and only have them for a short while, then you have to buy them again.

There are also niggles here and there with stats not loading properly and not updating, while in the game we experienced visuals sometimes becoming white blocks instead of their usual images.

Finally, there really isn’t all that much to do in the game right now. Other than the red versus blue deathmatch mode, there is zero other gaming content, and we found ourselves drifting off after a while. What it does is perfectly sound and reasonable, but the subject itself gets dull and repetitive once you’ve played maybe a dozen rounds.

But once again I must reiterate – the game is in beta right now, and all of our grumbles may well bear no resemblance on the finished product. For now, BigHead Bash is a great way to spend an afternoon, but you most likely won’t boot it up again beyond that.