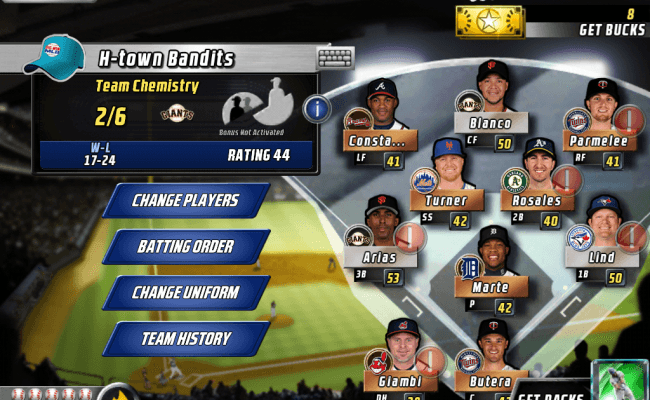 Big Win Baseball gets called up to the majors

What’s better than a cute baseball semi-sim  (look ma, I coined my own genre) for iOS devices? That same game with real MLB players and uniforms, that’s what. Hothead Games has its first fully licensed sports title on its hands with Big Win MLB, which is just like Big Win Baseball, except… realer.

I was all set to be lazy on this review by simply linking to a review of Big Win Baseball to describe the gameplay of Big Win MLB before discovering to my horror that we never reviewed that game here at Gamezebo. So here goes. The object is to build the best baseball team possible by winning games on the diamond and using the resulting rewards to buy packs of virtual cards to beef up your squad. The games play out automatically based on the relative strengths of each team, but there’s no attempt to strive for realism, which is why I dubbed it a semi-sim. 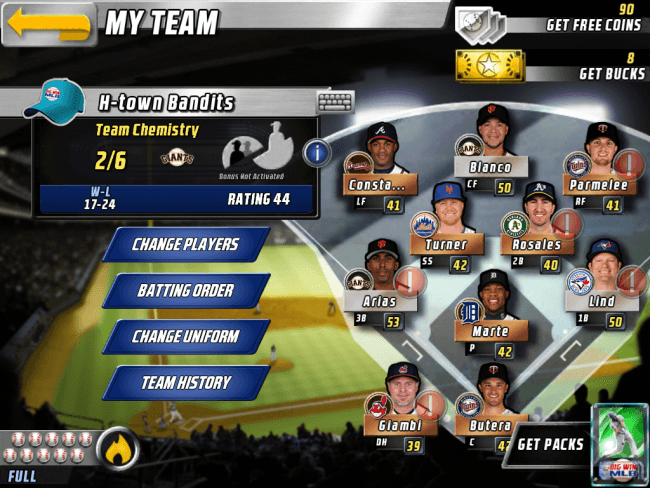 As a new player, you’ll get a starter pack of nine extremely mediocre real life major leaguers to form the foundation of your squad. You’re also given some coins and Big Bucks to buy your first few packs in an attempt to make them slightly less mediocre. Packs come in Bronze, Silver and Gold levels, with increasingly good stuff found as you move up the precious metal hierarchy. Special packs that can only be purchased with Big Bucks contain the very best cards, making you put in work and/or real money to attain them.

What kind of cards can you get? I’m glad you asked. Along with new players, you can find contracts (as players need to have their contracts renewed every so often), skill boosts, uniforms, and Big Impact cards. Those last ones are important, as they buff your entire team in some way, like making them throw faster or hit for more power. You can play up to three Big Impact cards in each game, and you’ll soon learn that playing without them is a good way to lose. 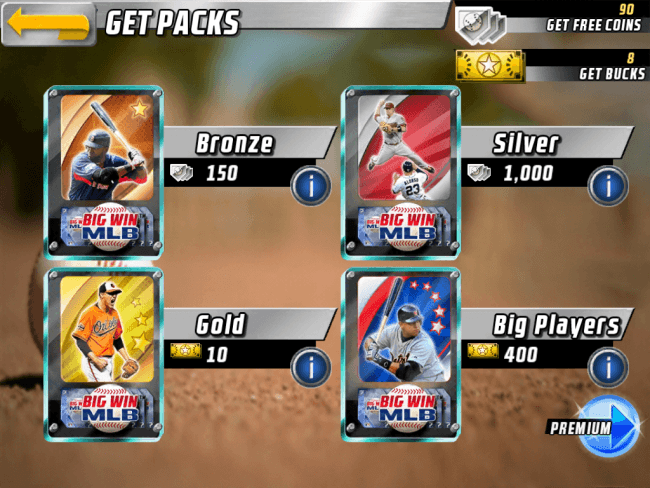 Position players are rated in categories like contact, power, glove, arm and speed, while pitchers get their own attributes that rate how well they throw certain pitches. Some cards will increase one of those attributes, while others add an additional slot that will accept a certain kind of skill boost. However even when fully boosted, a Bronze player won’t be as good as a Silver, who in turn won’t be as good as a Gold.

On the strategy side, your options are pretty much limited to changing the batting order around and swapping in new and better players when they arrive in packs. The one new wrinkle for Big Win MLB is that you get a team-wide bonus if you can field six players from the same big league club. That makes it a little more valuable to hold onto a bunch of players you might not otherwise need right away instead of selling them for extra coins.

The main gameplay mode is to compete for pennants in either 10-game or 20-game seasons. Amateur seasons try (though not always successfully) to match you against teams of similar levels, as opposed to Pro seasons, which can include teams of any level. You get a certain number of hours to finish all of your games, and while there is an energy mechanic that controls how many games you can play before it refills, it’s pretty generous and not much of an issue. Simply completing all of your season games will earn you some rewards, but finishing in one of the top five spots really pays off. 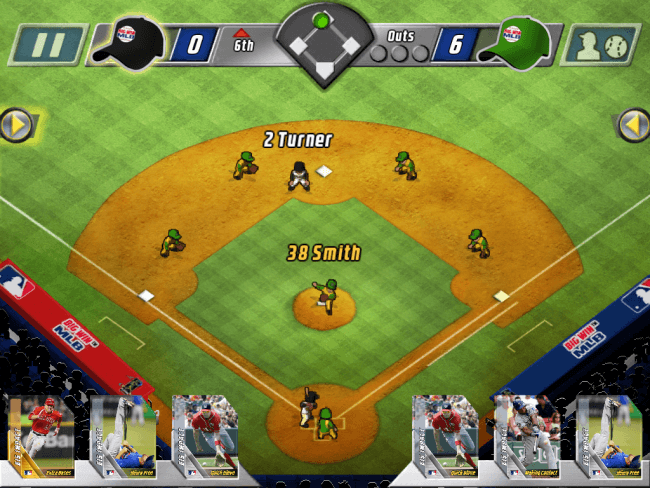 Things on the field are a little dull from a visual standpoint, as the players are tiny and all look pretty much the same. That stands in sharp contrast to the photos on the player cards, which are sharp and colorful. The action also gets repetitive at times, which is why the option to start watching at any inning or even skip to the end while simming the whole game is welcome. Your team gets experience points to help level up for winning and scoring runs, plus twice as many coins for a victory.

Of course you know all of this already if you’ve played Big Win Baseball, so the real attraction is the MLB license. It’s certainly a net plus, but getting any real life stars means a long grind or spending some money on Big Bucks. Even then there’s no guarantee you’ll find all-star players in a particular Gold pack, and the packs that guarantee top rated players are very expensive. On top of that, a big part of the game’s promotion has been touting the real MLB uniforms, which seems a bit disingenuous since these are even harder to acquire.

That’s not to say Big Win MLB is a bad game, just that it feels like Big Win Baseball with a fully licensed coat of paint applied to it – which it kind of is. You certainly won’t strain your strategic brain cells playing it, but it’s a decent free download if you want to build your own team of MLB stars and you’d rather invest time instead of mental energy.