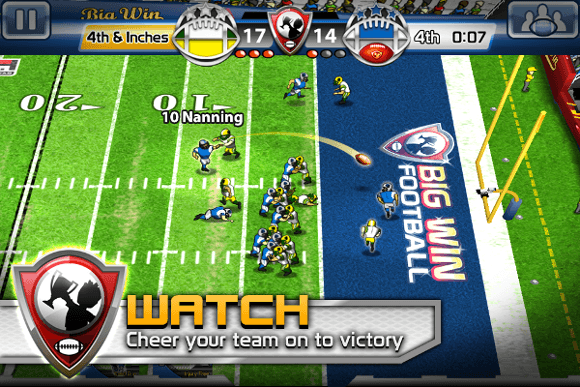 Build an empire from the comfort of your own pocket

Everyone loves dynasties. Jay-Z likes talking about them, and general managers of sports teams spend a ton of time and money trying to build them. Since most of us are a bit short on both of those things, it’s nice that Hothead Games has come up with Big Win Football. Now, building your own mini football empire can be done from your iPhone or iPad, and honestly, that’s a lot easier than working your way up to become GM, anyway.

A free download from the App Store, Big Win Football has some DNA from both collectible card games and fantasy football. Beginning with a starter pack of 23 players – that’d be just enough for both sides of the ball, plus a kicker/punter – your goal is to build the best team possible and get them out on the field to win games. We’re talking fake players here, though people can and do name them after their favorite real-life athletes thanks to the game’s customization options, which include name, number, nationality (Philippines represent!), hair style and skin color.

Improving your team means visiting the card store, where you can use coins or Big Bucks, the game’s premium currency, to purchase packs. Those come in Bronze, Silver, Gold and Premium varieties, and each one contains a mix of players, stat boosts, contracts and Big Impact cards. Better players can be swapped into the lineup right away, and the contract cards are used to resign players who have reached their initial game limits. Each athlete has a fixed number of contract renewals he will accept before calling it a career.

The stat boosts make individual players better by increasing one of four specific attributes that applies to his position: running backs have Run and Hands, kickers get Leg and Vision, etc. Up to four boosts can be given to a player, but once they’re locked in, there’s no going back, so there is some thought to put into the process. You can even plow all four boosts into a single attribute if desired, so if you feel like putting everything into your quarterback’s Arm rating and shirking everything else (a.k.a. the Jay  Cutler plan), knock yourself out.

Big Impact cards come into play during the games, affecting certain aspects of play for your team. Their catchy names give you some idea what they do, like the Iron Curtain card making it easier for your defense to shed blocks, and there’s a full description to fall back on if necessary. Up to three Big Impact cards can be chosen before each game, and playing without them can put your side at a big disadvantage. The only drawback is that you have to pick the cards before knowing how good your opponent is or what cards they will be playing, making your strategy somewhat of a crapshoot where you just hope for the best.

Big Win Football games play out without any player input based on your team’s stats and Big Impact choices. You can sim them in seconds or watch the action unfold, with a complete game taking roughly 10-12 minutes. Games can also be skipped to the end at any time, which is good when you are taking a pounding and no comeback is in sight. Watching is generally the way to go unless you are pressed for time, as Hothead did a nice job creating a playful tone with simple but colorful graphics. Little details abound, from the fans waving “D-fence” signs to the way the goalpost-mounted camera tilts to follow successful kicks as they fly.

A Quick Game option can get you onto the gridiron against a random team immediately, but the primary play mode is the Daily Big Bowl. This puts you into a day-long league with nine teams of roughly the same level, each playing up to 12 games. Along with the experience and coins you get for winning individual games, finishing in the top five in the Daily Big Bowl earns you additional coins and Big Bucks. You can also start a private Big Bowl with friends who play, adding a social element to the proceedings.

It almost goes without saying that there is a bit of a pay-to-win aspect to the game since Big Bucks can be purchased for real money, and the better packs of cards can only be acquired with premium currency. Still, the fact that you can win Big Bucks at all during gameplay takes the game out of the most cynical class of freemium fare, and Hothead is more honest than most studios about its switch to this model to make money.

Big Win Football isn’t going to interest people who want to control the action, but if you’re a football fan looking for a simple, fun way to run your own team, it certainly fits the bill. And if football isn’t your thing, no worries: There are Big Win baseball, soccer and hockey games, too. Get going on that dynasty.