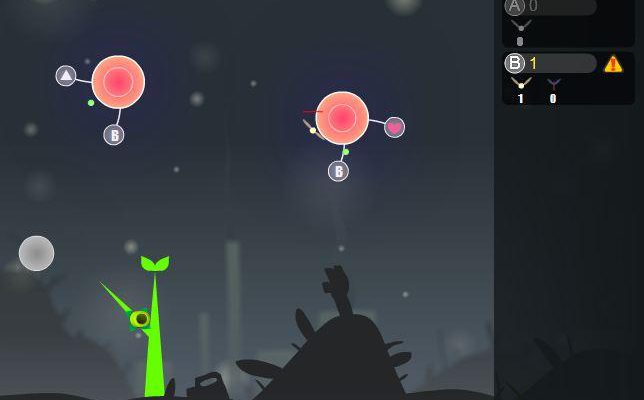 Big Tree Defense is a member of the tower defense genre of video games, in which players arrange assorted types of gun turrets and other fantastical weaponry in order to intercept and destroy wave after wave of attacking enemies. It’s a simple concept that’s been around for years; at their most basic, tower defense games are easy-to-play time-killers, but some of the more advanced versions require a surprising amount of strategic thinking. This one definitely falls into the latter category.

The simplest thing about Big Tree Defense is the story behind it: After years of deforestation and pollution, the Earth’s environment has been almost completely destroyed. Now, to finish what humanity started, a horde of insects has arrived from somewhere – outer space, I like to think, although the game isn’t too clear on that point – to destroy the planet’s last defenders: The few small trees that still remain. It may not make a lot of sense but this is hardly meant to be a narrative-driven experience, so off we go.

Big Tree Defense is a Flash-based game, so it doesn’t offer all the bells and whistles or graphical complexity of a full-blown retail release, but it makes the most of its relatively spartan visuals and sound. The graphics are rudimentary but bright and colorful, and while the sound effects are minimal, the background music is surprisingly good; a dreamy, hypnotic soundtrack that wouldn’t be out of place in a conventional video game.

For those unfamiliar with the tower defense genre, things can be a little confusing at first. The instructions cover the basics but not much more, and some experimentation will almost certainly be required to get a handle on what’s happening. Before each battle, players have the opportunity to buy weapons like Nut Cannons, Shine Flowers and Hungry Apples, as well as the option to increase their levels to make them more powerful. Advanced weapons and levels cost ever higher amounts of points; fortunately points are awarded after every battle, win or lose, so banging away at tough fights or repeating easier ones will pay off by making better defenses available. 12 unique weapons can be purchased but only seven at a time can be used, so choosing the right tools for the job is important. 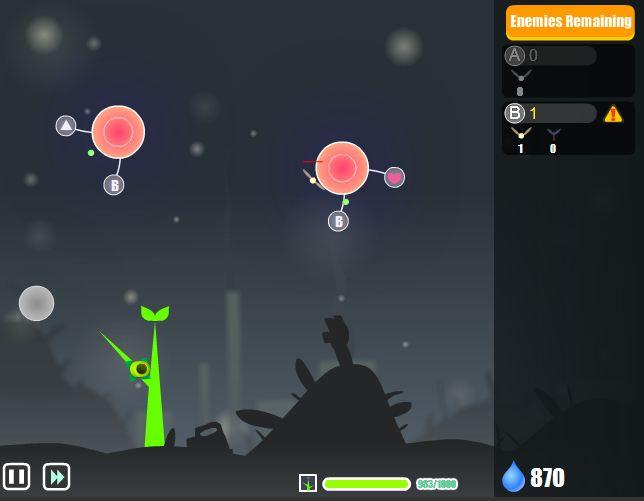 Once the arsenal is selected, it’s time to defend your tree. Each battle begins with the player in control of a small sapling and a limited supply of water. Using the water the sapling can be grown into a full-sized tree, increasing the amount of damage it can take, while weapons and branches can be added to help fight off the swarming insects. The tree branches can also be swiveled, orienting the defenses in different directions to further enhance their effectiveness.

Soon, the bugs attack! They come in several different varieties: Some are weak and some are very tough; some will zoom straight in, while others will lazily swoop around before making their move. Killing insects earns water, vital to the tree’s survival, but those that manage to land on the tree will cause damage, weakening and eventually killing it.

Insects that attack the tree and then escape will return to their spawn points, where they can be healed or cloned two or even three times. This is where things can get ugly: Five escaped insects can return as 15, an onslaught which can prove devastating as the attackers grow in number while the tree is continually weakened. Because of their ability to heal and replicate themselves, a drawn-out war of attrition is generally not a smart approach to take.

Experienced gamers may notice some superficial similarities between Big Tree Defense and a couple of other popular videogames on the market. Some of the tree-borne weapons bear more than a passing resemblance to the plants found in PopCap’s mega-hit Plants vs. Zombies, while the backdrops have a certain World of Goo ambience to them. But the likeness is purely skin-deep; in terms of gameplay, Big Tree Defense is all original, at least as much as a tower defense game can be.

For the uninitiated or the terminally unskilled, it can also be viciously hard. It’s certainly not impossible; many people have beaten all the levels and racked up ridiculously high scores in the Infinity Mode, which opens up after the game’s regular levels have been finished. But the learning curve is steep. The small screen size inherent in Flash games can also sometimes be an obstacle in the heat of battle, as branches, bugs and defenses overlap and become difficult to select. Gamers who are easily frustrated may find their patience sorely tested.

In spite of that, Big Tree Defense is a very good game with a lot to offer anyone interested in the genre, or just in trying something a little different. The early levels are a quick, relaxing diversion, while the later stages provide an unexpectedly complex strategic challenge. It may not blow you out of your chair on the first go-around, but stick with it: You might be surprised by how enjoyable it really is.