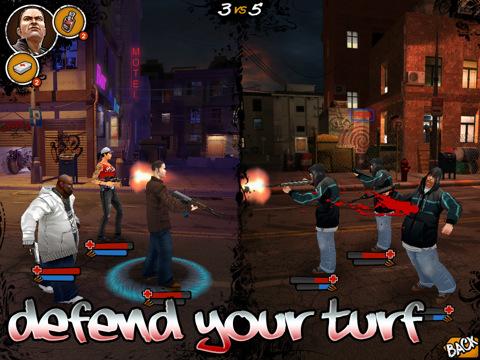 With the recent release of Contract Killer, Glu Games made it perfectly clear that they were looking to re-invent the Mafia Wars formula in a new and exciting way. Big Time Gangsta continues this trend, albeit in a slightly more urban setting and a slightly more successful formula.

The game begins with the player returning to the ‘hood after serving some time in prison. While you were away it looks like the punks in the neighbourhood forgot whose streets these are, so you’ll assemble your crew and start taking back what’s yours, block by block.

Like Contract Killer, the gameplay here is a blend of something old and something new. Again, the something old is Mafia Wars style mob play. Players will build up their crew, square off against opponents, and purchase equipment to boost their stats in combat. Players will also be able to complete missions, earn XP/levels, and purchase premium currency to unlock the best content. All of this should be instantly familiar to veterans of the formula.

But then there’s the something new. Combat.

Unlike social RPG’s, where combat is a passive game of luck and stats, Big Time Gangsta puts you in charge of each member of your crew as you jump into a shootout against an opposing gang. Crew members will shoot without any help from you, but they shoot slowly. To speed things up, players can tap on a player to select them, and then tap quickly on one of the targets to rapidly unload your ammo.

It’s a simple technique, but it’s also one that can make each battle a crazy non-stop finger moving and tapping affair. When one of your crew runs out of ammo, you’ll want to tap on another to take control of while that first member is reloading. This will keep your fingers dancing around the screen, all while you’re trying to keep an eye on the health of each member of your crew. You’ll also be able to purchase items that you can bring into battle, like first aid kits and temporary damage boosts that can be tapped on whenever they’re needed.

Battles occur whenever you try and take over a new territory like a drug lab, hospital, or project. The battles make up the bulk of the gameplay, but in order to win you’ll need to make sure you have the right crew and right equipment. This means making wise decisions in the shop before every confrontation, and figuring out which crew members and weapons are worth saving your pennies for. 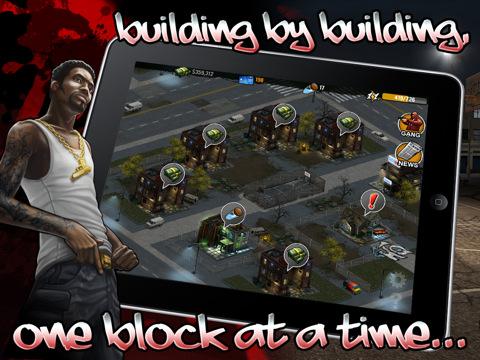 The combat here is great fun, and the freemium elements help to balance things out and keep the experience fair from a publisher’s point of view. For example, your crew can stay and fight as many battles as you want, so long as you keep them alive. If one of them goes down, however, you’ll either have to wait a number of hours for them to heal or use premium currency to bring them back into the game early.

The game itself only really has two downsides. The first is that it can become fairly difficult to keep your whole crew alive once you start getting into larger battles. This means that play sessions can amount to only minutes once you’ve advanced a little ways into the game. The other downside? Like Contract Killer, this is a game built entirely on the principles of social gaming, yet it has zero social elements. I’d love to be able to recruit my friends into my gang, or send and receive helpful items that could be taken into combat – but no such options exist in BigTime Gangsta.

While we’re not entirely sure why they’re doing it, it’s wonderfully refreshing that Glu seems committed to reinventing Mafia Wars- style gameplay by making it more interactive. And while it may not seem as grand in scope as Contract Killer, Big Time Gangsta accomplishes what it sets out to do flawlessly. Now if only they’d let me play with friends…