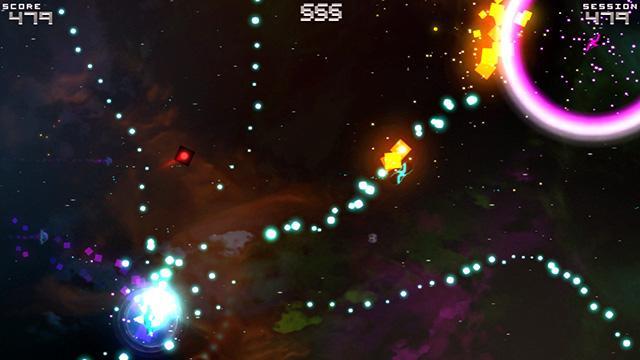 BigSky is a space shooter with much more to it than first meets the eye.

With the likes of Lunnye Devitsy and Wake under its belt, developer Boss Baddie has a lot to live up to. After such unique and interesting releases, the team of two has decided the next best step is to create a space shooter. It seems like a rather odd direction, but we were intrigued to see how they’d work their magic on the tired genre.

While Big Sky initially feels somewhat confused and generic, it slowly reveals itself to be an experience well worth your time. An upgrade system, along with procedurally generated levels, means that the game gets better each time you play. Of course, the game has that wonderful level of polish that Boss Baddie are known for too.

Big Sky is a side-scrolling “shmup’ that revels in huge explosions and screen-filling effects. You take control of a small spaceship on an unknown mission, constantly flying to the right and blasting down enemy ships along the way. As you take down the baddies, you’ll encounter boss battles and huge meteors that must be overcome.

Your tiny ship has a special trick up its sleeve – hit the Switch button, and your craft will spin around, revealing a drill. During this mode, you cannot fire your lasers, but instead can dig through rock and meteors. At certain intervals during play, you’ll approach huge rock faces that cannot be dodged, and you’ll have to dig straight through the centre. You’re given minimal notice that such an area is coming up, so you need to be quick on your feet to flick the drill out.

The first several playthroughs are confusing to say the least. The game doesn’t explain anything at all, and you’re left to work out everything by yourself. We found ourselves dying constantly, as the enemy completely overwhelmed us. A single hit from a laser or bad guy, and the game is over – hence, dying over and over again can be incredibly frustrating.

However, each time you die, you can then spend special points that you picked up on upgrades for your ship. Over multiple plays, your ship will become stronger and stronger, allowing you to get further through the game each time. Eventually you’ll find yourself ploughing through the first few levels without a worry, thanks to your supercharged laser and lightning-fast movement. 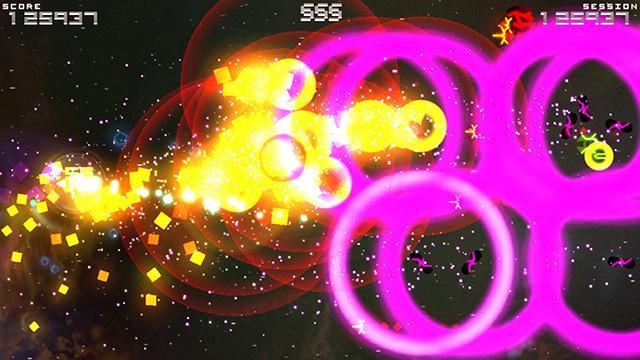 Having to repeat the same levels multiple times may sound boring, but it’s quite the opposite, since everything is procedurally generated, from the positioning of the enemies to how often they spawn. Even the ordering in which boss battles appear is different every time.

The game looks really fantastic, with gloriously powerful explosions lighting up the screen as you blast your way through the hordes. Your laser fire also pulses along to the techno soundtrack, really adding to the overall feel. Even the menus look amazing, with bright neon lights shining out from the dark. It’s all very polished indeed, as you’d expect from this developer.

There’s still that awkward feeling in the back of your mind, however, that you’re not fully “getting it.” Since nothing is explained, certain elements are left open to interpretation. For example, why do strange words sometimes float around in the background of the game? We really have no idea why the game is proclaiming CRISPS while we’re playing. Is it an in-joke of the developers?

Some of the gameplay elements completely eluded us too. Sometimes our ship seemed to be able to take multiple hits and be perfectly fine, while other times we’d die from a single hit quite early on. There also doesn’t appear to be any indication of your ship’s health. If these elements are indeed included somewhere then the game really needs to explain where!

Even with these slight hiccups, Big Sky is masterful fun. With achievements to unlock and an online highscore table, we’ll be playing for a good while yet. Apparently there is an end, but we haven’t managed to reach it yet! If you’re a big space shooter fan, make sure you check this one out.