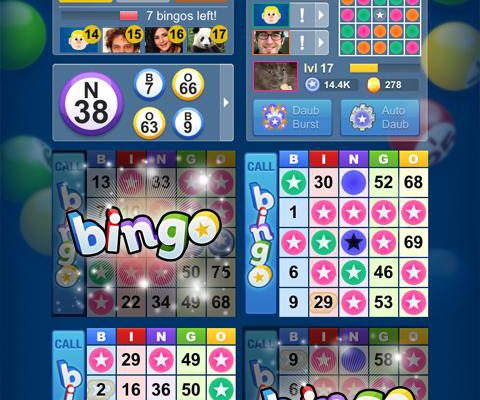 Despite all the visual flare, this is still as bingo as bingo gets

Bingo seems like the perfect choice for the current mobile gaming environment since it’s inherently social. Though now that I think about it, most of the social interactions I remember from bingo involve older folks yelling at me and my brothers for sitting in their seats and disturbing their mojo. In any case, Big Fish Bingo makes a valiant effort to spice things up for today’s mobile gamers but can’t escape the inherent limitations of bingo itself.

If you don’t already know how to play bingo, this probably isn’t the place for me to explain it. Big Fish Bingo allows you to play between one and four cards in each round for the cost of some gems. You’ll get additional gems every half hour, plus you can win some by placing highly in each round.

The game’s best innovation is the way it makes bingo both an individual and a team competition – kind of like gymnastics, but without all the tumbling, chalk and Phillip Phillips. You’re racing against all of the other players to get the first bingo, but you also have three teammates. While everyone is chasing bingos, you’ll also be trying to help fill the team card to earn additional bonuses. Some of the better power-ups can aid your teammates, too.

Yes, I said power-ups. Unlike the games at your local bingo hall, you’ll have access to a pair of nifty tricks in each round. Most of these daub squares on your cards that haven’t been called yet in one way or another, while others can make up for your own shortcomings, highlighting numbers you haven’t marked yet or filling in others that you missed. Power ups come in several levels of rarity, and the ones in the top tier (especially one that makes one square on each card an automatic bingo if called) border on gamebreakers. It would be nice if the power-up system was explained in more detail, but most can be figured out without too much trouble. 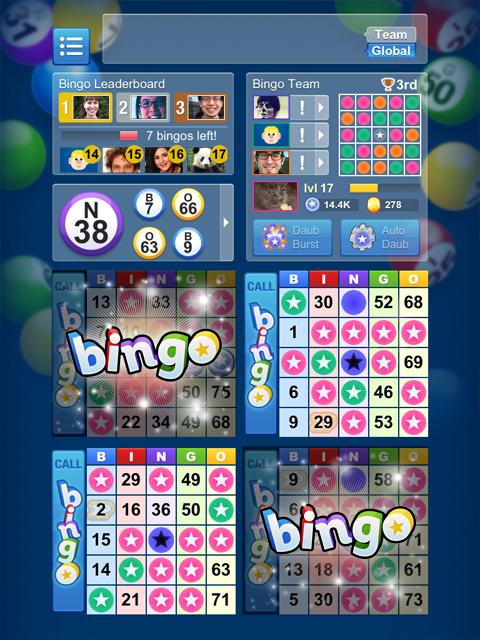 The idea is that you’ll plot strategy with your teammates in-between rounds to find combinations of power-ups that best complement each other. There’s little doubt that some teams actually do this, and a team chat window before each round makes communication possible (the action moves too fast to chat during play). But in practice, players end up jumping in and out of the game often, and you rarely end up with the same people on your team for too long. It would take a really dedicated group of bingo players for any kind of serious coordination.

Rewards for finishing well individually and as a team include gems, gold and XP. Both gems and gold are for sale for real money, but the former only needs to be purchased if you’re impatient, and the latter doesn’t buy you anything but more power-ups. There just isn’t that much to buy. 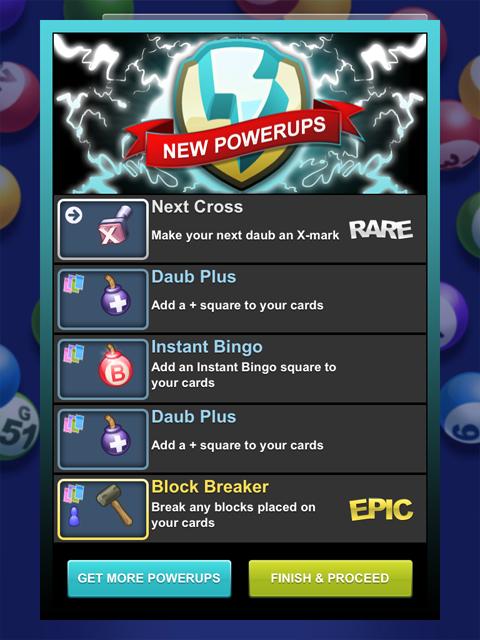 Nor is there much else to do once you’ve played a few rounds. You can unlock more rooms as you level up, but it’s still bingo, no matter what kind of presentation you put on it. It does look nice, which you’d expect since Big Fish always comes through in the graphics department. The sound is also well done, with numbers called out distinctly and other audio cues filling you in on what’s going on. The lone glitch I found was in the results screen, which occasionally popped up at the same time as the waiting room for the next round, making both illegible.

That’s an easy fix for a future update. What isn’t so simple is finding a way to make Big Fish Bingo attractive to people who aren’t already predisposed to enjoying bingo. This might have been perfect as a room in Big Fish Casino, but as a standalone iOS app, it’s probably going to appeal to enthusiasts only. In other words Grandma, if you got that iPhone I sent you, this one’s for you.