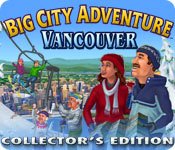 If, like me, the upcoming Winter Olympic Games have you wishing you could visit beautiful Vancouver, Canada, this may be just the game you need. Playing through Big City Adventure: Vancouver is like taking a virtual tour of the city, mixing history and trivia with local landmarks and scenery. Throw in a bit of winter sports flavor, and it’s almost like you’re there for the games themselves, just with fewer national anthems.

(At this point, I should mention that Big City Adventure: Vancouver doesn’t officially have anything to do with the Olympics. There are no rings, no torch, no mascots, nothing of that nature – just lots of skis, bobsleds, ice skates, hockey sticks, and rock formations that bear a striking resemblance to the logo of this year’s Games.)

Having toured New York, San Francisco, and Sydney (the other entries in the Big City Adventure series), you and your family are now off to take in the sites of Vancouver. You’ll trek from one end of the city to the other as you make your way through the game’s  69 hidden object and puzzle levels. Each level takes place at a different landmark or scenic attraction, and while some locales repeat, you still see so much of the city that it doesn’t feel repetitious.

Hidden object levels alternate with one of a variety of puzzles; solve both, and you’re on to the next location. The locations aren’t photographs (the snow-dusted mountains are gorgeous), but are still beautifully drawn and animated. The item searches are pretty standard fare, tasking you with hunting down objects on a list, but are well constructed and don’t feel overly cluttered or messy.

Each list includes at least two items listed in blue, which are hidden in a special area of the scene that you must zoom in on to see. It’s a slightly problematic mechanic, because the game doesn’t do anything to indicate where the special area might be, so you have to run your cursor around until you highlight it. It’s not hard, but it can be a bit tedious.

Different kinds of coins are also hidden somewhere within each scene. Some grant you bonus points, others extra time, and some give you hints. The Fast Forward hints are particularly helpful, and point out several objects at once – very useful for when you’re trying to rack up a big score (or are just in a hurry).

In between hidden object levels, you’ll have a variety of puzzles and mini-games to play. You’ll do word searches, assemble jigsaws, assemble a path for a bobsled, fit Tetris-like blocks into a box, and so on. The puzzles get harder the further you go, but they’re never too tough. What they are, however, is a bit boring. It doesn’t help that you have to do them over and over and over again — even with the large variety of puzzles, you’re going to be retreading the same ground a lot.

That wouldn’t be so bad if Big City Adventure: Vancouver wasn’t so stingy with the Skips. Unlike most other hidden object games, you can’t simply Skip out of each and every mini-game that’s vexing you, because you only have a small handful to go around. You earn more as you progress through the game, but they’re still quite sparse. Most of the mini-games are fast and easy enough for it to be a real problem, but if you’re sick to death of arranging totem tiles or playing the matching game, you’re going to have to just suck it up.

Its art is pleasant and its searches are solid, but what Big City Adventure: Vancouver really has going for it is sheer size. Even if you’re a speed demon, it’s going to take you quite a while to burn through all 69 levels, especially if you stop to read the informative post cards that pop up when you’ve finished a scene. It’s not going to blow you away with its story (it doesn’t really have one), or its gameplay (you’ve done all of this before), but if you’re in the mood for a HOG, or the Winter Olympics, or both, a trip to Vancouver would be time well spent.