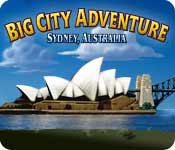 Throw some prawns on the barbie, time to leave the cable cars of San Francisco behind and head for a hum dinger of a trip with the Big City Adventure family in the new hidden object game Big City Adventure: Sydney, Australia. Discover well-known sites like Hyde Park, Sydney Opera House, Sydney Harbor Bridge, and Royal Botanical Gardens. Venture beyond the beautiful and famous buildings to Circular Quay, the Domain, markets, and museums. Count on re-experiencing the fun of traveling by the bay in a new setting with a few new features.

Though you’ll revisit a couple of the 25 places, you’ll always receive a new postcard with facts about Sydney and its abundant past. The ability to review past locations adds a welcome improvement. Click on a memento from a completed level to see the postcard with related facts. Sometimes you just want to play the game and not learn about every destination. Now you can go back and read them when you’re in the mood.

As expected of a hidden object game, your goal is to track down the items that appear in the inventory of things to find in the current location to collect a momento and move on to the next desination. Timed mode adds the pressure of finding the items before the clock runs out.

After spying all the hidden items among kangaroos, boomerangs, and wide brimmed hats, it’s mini-game time. Three mini-games from San Francisco follow the family to Sydney where they discover three more. The mini-game returnees are Match the Groups, a match three game that calls for making matches on every tile until they all disappear; Jigsaw Puzzle, put together all the pieces in their rightful places; and Memory Game, find the pairs until each one finds its mate. Many match three games may exist, but the images move as the tiles fall for a great effect.

Remember Whac-a-mole at the arcade? Moles randomly pop up while players try to bop them with a hammer. Instead of hitting moles, hit crocodiles on their noggin’ to send the pies flying out of their mouths into a basket. It’s a dodgy game, but some might like it as Whac-a-mole and its copies are still around for a reason. In the Pelican/Turtle Challenge, 15 tiles display a pelican or turtle in different poses. You must find the tile that matches the selected image. Successful matches send a fish flying into a bucket. Like the Bop-a-Croc, you need to meet or exceed the target number to win the level and head for the next destination. This one is about as fun as a memory game — grows old even at the more difficult levels.

Not all the new mini-games turn out flat. Mahjong Tiles, although another matching tile game like Memory, changes the pace of mini-games. Like traditional mahjongg solitaire, the game calls for matching pairs of tiles that aren’t blocked by other tiles. Rather than playing until clearing the screen of all tiles, end the game faster by matching the two gold stars. Casual gamers might’ve seen this feature in mahjongg-specific games, but not likely as a mini-game.

Tokens and "Quick Find Bonus" points also carry over from San Francisco to Sydney. Tokens hide in every scene for bonus points, more single object or fast forward hints, and adding time to the clock. Single object hints obviously point to one item while fast forward hints briefly show three items in one sitting. Say hello to one welcome and brilliant new coin: Skip. As you play, you earn Skip coins to use to pass on a mini-game. Tired of bopping crocs? Trade in the Skip coin and move on to the next level. Take care in using those coins as the game challenge climbs as you make the rounds.

Most hidden object games give demerits for mindlessly clicking too many times or clicking on the right object that didn’t take. Sydney visually lets players know when they click an item that doesn’t appear on the list. However, the game sometimes misses a valid click. It also can’t handle one click after the other – the game is busy focusing on making an object disappear before it recognizes your next click. So you have to wait a few seconds before clicking the next correct object you find. If you prefer to take it easy and enjoy the hunt, relaxed mode keeps away any worries about the clock. Hardcore object finders won’t find the clock scary in the first half of the game, but watch out for overconfidence. The game eventually turns cool headed players into sweaty ones.

The progression from easy to difficult moves at an even pace. Be patient if you don’t feel challenged. If you keep playing it, the challenges will come. Enjoy the scenes and don’t let yourself memorize where all the objects are. They rarely return to past spots. Unlike during the Hollywood writers’ strike, you don’t feel like you’re watching reruns of scenes and objects.

The only noticeable pattern comes in the game’s sequence: Travel to a spot and find the hidden items. Play a mini-game to discover the next destination. Find the hidden stuff in the new destination. Play mini-game for next one. Repeat. No room for flexibility, which should please those who just want to do the puzzles and not worry about what to do next.

The game retains the same musical and graphical brilliance as the original. Considering the amazing scenes, it’s disappointing the original characters don’t get a facelift to look more natural in their poses. At the start of the game, players pick a character to play you throughout the game. Dad, Mom, brother, sister, grandma, and grandpa all came back for the adventure and bring along two new friends: Wallaby and koala. The Aussies make a cute addition, although koala could stand to lose the corny cap.

It doesn’t take much to become wrapped in mucking around for hidden objects in the lush world of Austrailia. Big City Adventure: Sydney successfully retains the charm of San Francisco leaving you wondering what the next destination will be.