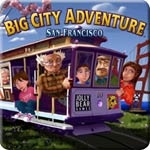 Renowned for its foggy summers, steep hills, eclectic architecture and famous landmarks like the Golden Gate Bridge, Alcatraz Island and cable cars, San Francisco is now the site of thousands of cleverly hidden objects in Big City Adventure: San Francisco. That’s right. If you’re a fan of the hard-to-find, you’re in for a delightful time in the city on the bay.

So, what’s exactly in store for hunt-and-search aficionados? A scavenger’s trip of a lifetime!

Big City Adventure: San Francisco is the latest addition to the popular genre of hidden-object games. Set in cosmopolitan San Francisco, it offers you the chance to visit 20 of the city’s famous, and not-so-illustrious, landmarks. In the process, you’ll learn some interesting and obscure historical facts, as well as collect some cool mementos.

In all, thousands of objects are concealed amid the game’s 120 rounds of cluttered-up fun. Included are 60 rounds of treasure hunting interspersed with an additional 60 rounds of entertaining mini-games (comprised of match-three style play, jigsaw puzzles and memory challenges) that provide a transition between destinations. Each hot spot is also described via a "postcard" that offers some interesting bits of info about its history.

Play begins by entering your name and selecting one of six family members (Dad, Mom, Sister, Brother, Grandpa or Grandma) to represent you. Then, it’s off to the first local, Alcatraz Island (other spots include Market & Powell, Haight-Ashbury and the Golden Gate Bridge). While the game doesn’t feature traditional separate play modes, you can switch at any time between a Timed and Relaxed mode of play from the Options Screen. Still, you’ll usually have plenty of time to find most objects even when playing "on the clock."

Like all games in the genre, what you’ll find when you land at each location is a menagerie of items, both appropriate and inappropriate to the surroundings, presented in a manner befitting the best hoarders in the business. Some objects will be quite apparent, while others will be cleverly disguised. In either case, your task is to find all the items listed before time runs out.

But, as alluded to above, gameplay is not just about digging through screen after screen of accumulated junk. Interesting mini-games are used as transitions between San Francisco’s numerous locales. Three tile games are employed, including the old memory game where you flip tiles over to match item pairs. In another, objects are visible but must be matched with exact replicas displayed below. Otherwise, you incur a penalty. You’ll also find a match-three derivation. In each case, the goal is to break the tile by making correct matches. The last mini-game, a standard jigsaw puzzle, breaks up the tile madness.

What really sets Big City Adventure: San Francisco apart from the crowd, however, is its attention to detail. Each location is beautifully rendered, scenes and objects, and populated with cute spot animations and background sounds that add life to an otherwise still-life setting. Bugs crawl on walls, tassels sway in the breeze, lights flicker, pigs fly and, well, you get the animated picture. Meanwhile, you can hear people bustling about, the drone of crowds talking, and doors opening and closing. Individually, it’s just a small touch, but together adds immensely to the game’s ambiance.

Nevertheless, even more important is the fact that the object list, as well as a few of the items themselves, change each time you play, adding enormously to replay value. That’s something most of the competition lacks. And, frankly, that’s a feature that should be standard for all hidden-object games. Other niceties include a high score list, in-game instructions specific to each screen, and support for 3D acceleration and widescreen monitors.

There’s more, too. Bonus Coins are employed for multiple uses. Some act as a means of uncovering concealed items, several add extra time to the clock and others simply increase your score. Moreover, find hidden objects in rapid succession and you’ll receive a Quick Find Bonus. Unused coins provide an end-level bonus, too, as does time remaining on the clock.

Overall, what you get with Big City Adventure: San Francisco is a top-notch package with great family appeal. It’s not a truly innovative game, but it’s a highly refined one that takes the best of its genre and tops it off with an extra spit shine. It’s a treat for the eyes, ears and mind.

But, it’s not perfect. If you fail to read a postcard, you can’t go back and re-read it later, as there’s no postcard gallery. You also can’t easily replay a level you’ve already completed. To do that, you have to start over from scratch as the game is linear in approach. The ability to replay a completed level, or mini-game, at any time should have been included.

Regardless, you won’t regret this visit to the city on the bay. It’s fun, challenging and highly-replayable. It appears that Rice-A-Roni isn’t the only San Francisco treat.