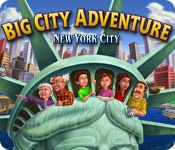 Hidden object game Big City Adventure: New York City is rather a lot like Manhattan itself: very large and with an overwhelming number of things to see and do. It can be a bit aggravating at times, but what trip to the Big Apple isn’t?

After touring San Francisco and Sydney, your family has decided to take in the sights of New York City, hitting hot spots like Wall Street, Chinatown, Little Italy, and Harlem. At each stop, you’ll scan the area for a list of hidden items. At least two of the items will be hidden in special areas that you’ll have to zoom in on to search, but both the special spot and the objects are indicated in blue, so that you’re not left searching in vain. The items are well hidden, but never unfairly, so a keen eye and patience will spell success. Hint coins will help you through those moments when you’re just plain stumped; you can only hold five at a time, but when your supply drops, a fresh batch will be hidden in your next location.

You can also use Fast Forward hints, which highlight several objects at once, letting you clear an area more speedily. Time coins add either two or five minutes to your time to either give you more breathing room or just bump up your point score when the round is complete. You can only hold so many of each coin, and if your coffers are full, the only coins you’ll find will be bonus points, but who doesn’t love a nice fat score?

After clearing a hidden object section, you’ll have to clear a puzzle, such as rerouting streets to allow a taxi to pass, or stuffing luggage into a cab’s trunk. These segments aren’t awful, but they’re not terribly inspiring, either, and they repeat, growing more difficult with each return. Clear enough rounds and you’ll earn Skip coins that will let you bypass the puzzles and get back to the hidden object finding. You shouldn’t have too much trouble with these levels (though the luggage-cramming got a bit tiresome for me), but they’re not nearly as much fun as the item searches.

One feature that makes Big City Adventure: New York City particularly fun to play is its Quick Continue option, which lets you skip the tallying up of your end-of-level bonus and just get on with playing. If you want to take the moment to exult in your point-accruing success, you can, but if you’d rather just bank the points and get on with things, the Quick Continue option is a fantastic and welcome shortcut.

It also helps balance some of the frustration the game’s item searches can cause. Though for the most part they’re very well done, every once in a while they throw an oddly phrased object at you – do you know what a "bird cover" is? I didn’t – or do something confusing and misleading. Most levels will ask you to find more than one specific item, such as two anchors or three cups, which is indicated as a number in parentheses. In one level, such a number followed one of the blue items (a paperclip) that can only be found in a zoom-in area, so naturally I assumed I was looking for two of that item. Not true. One paperclip was in the zoom-in area, the other was hidden elsewhere. Certainly not a game-breaker, but annoying to realize that you’ve been wasting your time looking for something that isn’t there.