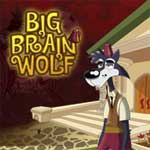 In the world of fairy tales, big bad wolfing is something of a family tradition.  But the protagonist of Frima Studio’s Big Brain Wolf is something of a black sheep.  Choosing veggies over victims, Wolf would rather lead a friendly life helping people as a genie.  But just as he’s about to finish his studies, the unthinkable happens; his mother is framed for murder!  Can Wolf use the cleverness he developed at the Genie Academy to solve this mystery?

Big Brain Wolf is a hybrid adventure/puzzle game that will really get you scratching your noodle.  While the story will progress in classic point’n’click fashion, you’ll find that most of your time will be spent trying to tackle logic puzzles that will really put your brain to the test.

As you progress through the story you are going to encounter characters and objects that will require you to tackle these puzzles to continue.  You’ll encounter a variety of challenges in the game’s 60 or so puzzles.  Word puzzles, numbers games, shape situations; the types of puzzles run the gamut.

While figuring these puzzles out may come easy to some, none of these have simple solutions. Remember, the puzzles in Big Bad Wolf are based on logic.  Don’t expect to find simple world scrambles or round-peg/round-hole gameplay here.  The types of challenges you’ll face are more like "make 6 triangles with these 6 sticks" or "connect like objects without letting their paths cross" — that sort of thing.

And while the puzzles are definitely challenging it never feels like the game is cheating you.  Some people are quick to draw comparisons to Professor Layton and the Curious Village, but for many gamers, Layton was a frustrating chore.  The challenges were often brutal and seemingly unsolvable without hints, and would often turn out to be a simple solution based on a tongue-in-cheek phrasing.  That sort of trickery doesn’t exist in Big Brain Wolf.  The puzzles are straight forward, and provide more than enough challenge on their own.

The developers included a well-designed hint system as well; one that makes you work hard to earn the hints you may be so desperate to use.  Each puzzle has three hints to unlock if you’re stuck, but to unlock those hints you’ll need keys.  Earning those keys means spending time doing brain training exercises.  There are six different exercises in total, each quite different from the other.  They’re based on the NeuroActive Program, a brain fitness routine not unlike Nintendo’s Brain Age series.  The longer you spend training, the more keys you’ll unlock.

While the puzzles in the game are certainly reasonable and the hints appreciated, about halfway through the game the difficulty ramps up pretty drastically.  Even with the hints unlocked, some puzzles were just excruciating to accomplish.  It would have been nice to see a final hint for each puzzle that simply completed the puzzle for you.  At first it might seem like the easy way out, but again, you’d have to earn enough keys to unlock it.  Besides, feeling foolish at seeing the solution you’ve spent hours trying to solve would likely be punishment enough.

The story has a great sense of humor to it, and takes a very modern tongue-in-cheek approach to the world of fairy tales.  In a lot of ways the writing reminded me of early Tim Schaefer games like Monkey Island or Day of the Tentacle.  Pinnochio’s nose leading him to a career in law, magic mirrors used like to record tv shows — it all came together to create a fun modern take on classic children’s stories.  Mind you, there’s a good deal of 20th century humor in there as well.  References to everything from vulcans to the Xbox 360 are sprinkled through the narrative.

Big Brain Wolf offers up a whimsical good time for fans of classic comedy-filled adventures, but some of the challenges in the second half of the game may prove too difficult for many gamers to complete.  As well, some of the puzzles assuming a basic knowledge of chess which is something not every player is going to have.  Big Brain Wolf offers up a terrific package that you’ll definitely enjoy, but you might not be able to enjoy it to completion