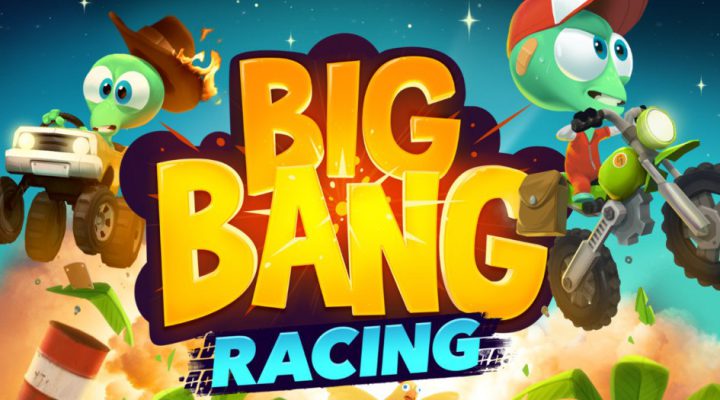 Great creation mode that anyone can have a crack at.

Not the most technical racer.

Free to play system means sometimes you're not rewarded for winning.

Big Bang Racing is a bright and engaging cartoon driving game that owes more to the likes of Trials than it does anything else. It’s a cheery smile of a game, full of explosions and hats and silliness.

And sometimes that’s all you want from a racing game. Oh sure, you could tune the springs and polish the spark plugs, but quite frankly who cares about all of that nonsense? Let’s go and do loop-de-loops and backflips instead. There’s plenty to do here as well, and a social aspect that sees you clambering up the leaderboards, upgrading your car and getting new hats to plop on the head of your character. 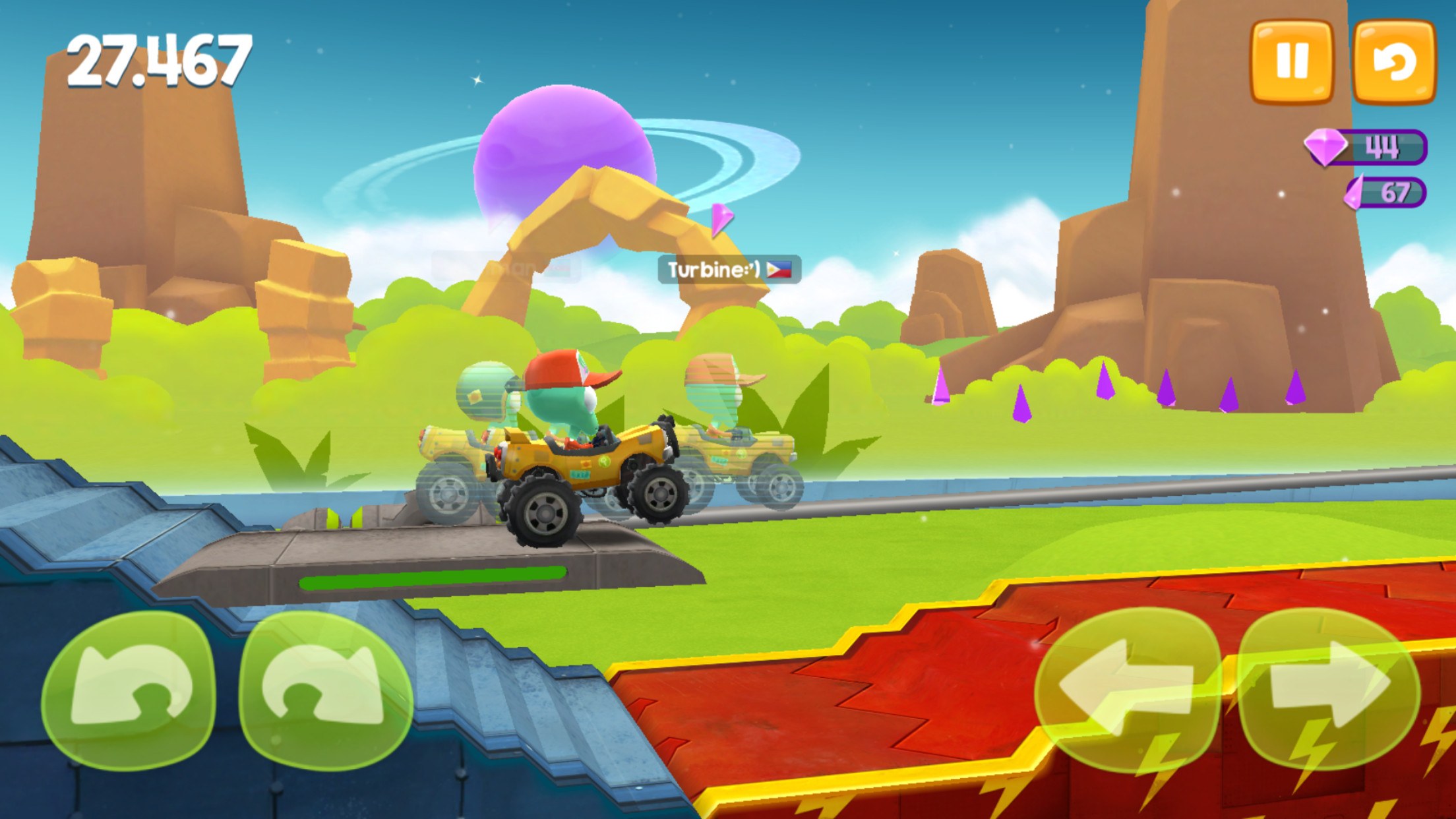 You also get nitros, because you can’t really have any fun if you don’t have a button that makes you go so fast your eyeballs nearly fall out. Using this combination of controls you need to get to the end of a bunch of levels, grabbing objects as you do.

There are different modes as well. One pits you against the ghosts of other players in a race to the top of the leaderboards. Another is about getting to the end of the level without dying. It’s the third that’s probably the most interesting though. 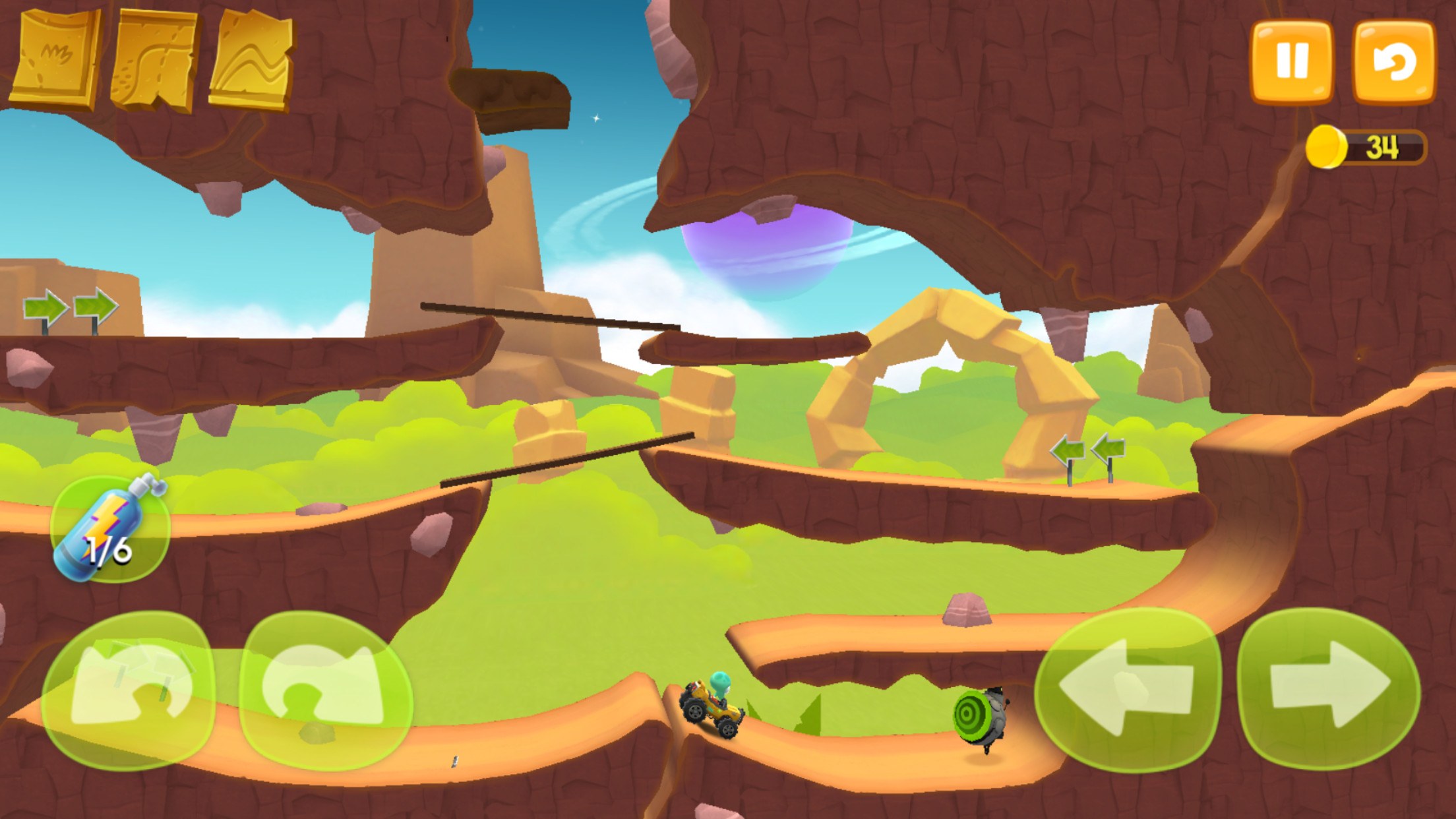 This one lets you make your own levels and then share them with the community. It’s a pretty simple process, and you unlock new lumps of scenery as you play the rest of the game.

Making levels is as simple as drawing out what you’d like to see. Push a finger on the pencil or eraser tool, then use another one to scribble out or get rid of the ideas in your head. You can pay with coins you earn in the game to add different obstacles as well. There’s already some pretty ingenious creations on show, and it means there’ll always be something new to play with while the community is still creating. That’s not to say that the designed levels aren’t great though.

You’ll swoop through loops, contend with moving platforms that toss you in the wrong direction and weave through exploding barrels as they clear a path to the exit. And you’ll be smiling throughout the whole slightly chaotic experience.

And really that’s the best thing I can say about Big Bang Racing. It might not be as flashy or good looking as other racing games, and it might not scratch that spanner-wielding itch that tinkerers feel sometimes, but that’s not really the point. Instead it’s a more-than-solid arcade blast that does everything it tries to do just right. Don’t expect it to reinvent the wheel, because that’s not its aim. Instead it’s a game to keep you entertained and cheery in short blasts of grabbed play.

Throw in the community aspects, and you’re left with something that’s a little more than the sum of its parts. This is a game that’ll happily stick around on your homescreen for a good long while, and you’ll enjoying plunging back into it time and time again.