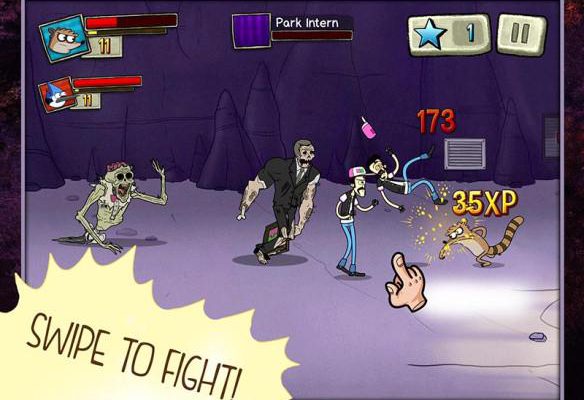 It often seems like Cartoon Network’s Regular Show can do no wrong. Whether it’s in the episodes themselves, the spin-off mobile applications, or the countless strings of unique and quotable dialogue, the wild misadventures of the 23-year-old slackers Mordecai and Rigby have established a massive cult following of both kids and adults alike. So why should a full-fledged mobile game based on the much beloved series be any different?

Enter: The Best Park in the Universe, the definitive way to play a part in all of the hysterical slacker action. This isn’t Regular Show’s first foray into the world of mobile gaming, either. We saw the blue jay and raccoon best buds take on some fast-paced touchscreen action in 2012’s Nightmare-athon and last February’s Ride ‘Em Rigby. However, while both of these titles were great in their own right, they still felt like somewhat simplified arcade games, which were fun in short bursts, but failed to provide a more comprehensive and in-depth gaming experience. Luckily, The Best Park in the Universe achieves these goals in almost every way imaginable. 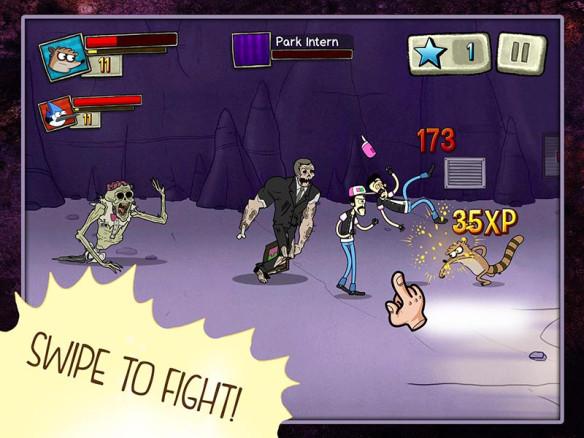 When the game begins, Mordecai and Rigby have unwittingly offered up their park to a strange green man, who just so happens to be stealing parks from different planets in an evil plan to knit them all together and create the greatest park in existence. So naturally, this leads to Mordecai and Rigby embarking on a sidescrolling adventure across the galaxy to save their park (but mostly just so Benson doesn’t find out). The story is simple and fun, with just the right amount of weird that the show is known and loved for. Much like how a typical episode of Regular Show progresses, you’ll go from battling down-to-earth enemies at first like park interns and groundskeepers before things get much more abstract and you quickly find yourself taking on killer robots and zombies.

Like many of the cartoon’s throwbacks to 80’s and 90’s pop culture references, The Best Park in the Universe brings us back to a time when nothing was better than a good old fashioned beat-em-up arcade game. I’m sure you know the ones: Turtles in Time and Captain Commando are among some of my many personal favorites. The graphics and animations are simply superb, and it really makes you feel like you’re actually playing an episode of Regular Show. With 15 massive levels set across 3 distinct parks, there is never wont of things to see or bad guys to punch in this game. 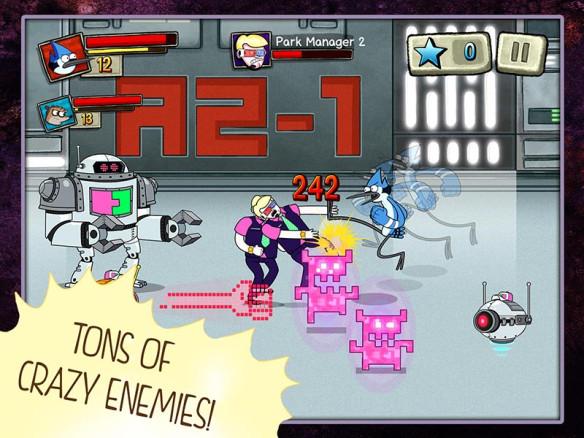 With a beat-em-up game of this nature, a lot of its overall success boils down to the controls. The Best Park in the Universe manages to pull them off rather well, by having you swipe your finger on the screen to fight. It’s surprisingly effective and I didn’t mind using this control scheme, but it might come down to a matter of personal preference; I won’t lie that something feels missing in not being able to mash on some buttons (or digital buttons) and have each press correspond to a punch in your enemy’s face. As an added layer of depth, you’ll even begin to unlock new moves and combos the more levels you complete. But even so, this is still a strict beat-em-up arcade game, and if you’re looking for a little more variety besides the mindless punching of giant insects and the like, then the game might start to feel a bit repetitive before long.

The best part about The Best Park in the Universe is that it feels like a video game that Mordecai and Rigby would actually play themselves in the cartoon show, while slacking off during the work day and trying to avoid Benson’s constant list of chores to do around the park. And as if the adventure wasn’t big enough, Cartoon Network is already promising that new levels, enemies, and playable characters will be coming soon in free updates. I know I’ll be checking the App Store every day for these, because Muscle Man was absolutely made for a beat-em-up romp such as this.