Home / Reviews / Best Fiends Review: With Fiends Like These… 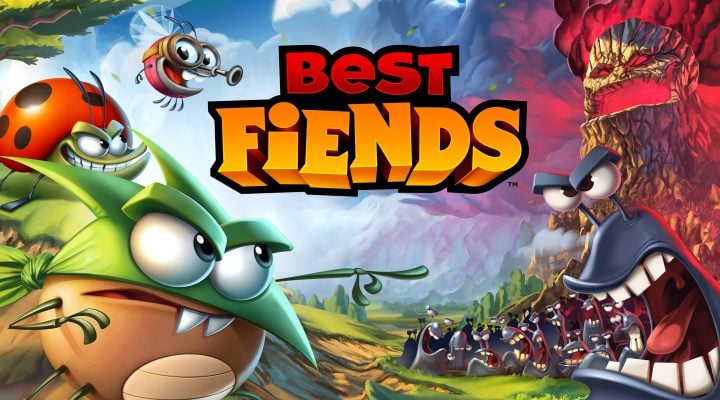 Energy meter defines when and how often you can play, forcing frequent stops.

Despite the polished package, there's nothing here we haven't already seen before.

Best Fiends is the first offering from newly formed development house Seriously, a team of widely ranged talent pulled from such powerhouses as Angry Birds’ Rovio, Where’s My Water’s Disney, and Max Payne’s Remedy. The group’s triple-A experience is immediately visible in Best Fiend’s keenly polished aesthetics and silky smooth gameplay, which sends a band of charming insect pals on a match-3 adventure against a swarm of invading slugs.

With a minute attention to detail and tried-and-true genre of choice, it’s easy to fall for this puzzle-RPG hybrid at first. But soon enough, the game’s suppressive energy meter rears its stingy head, leaving you with a simple choice: wait to play, or move on to one of the thousands of other comparable games available on the App Store. 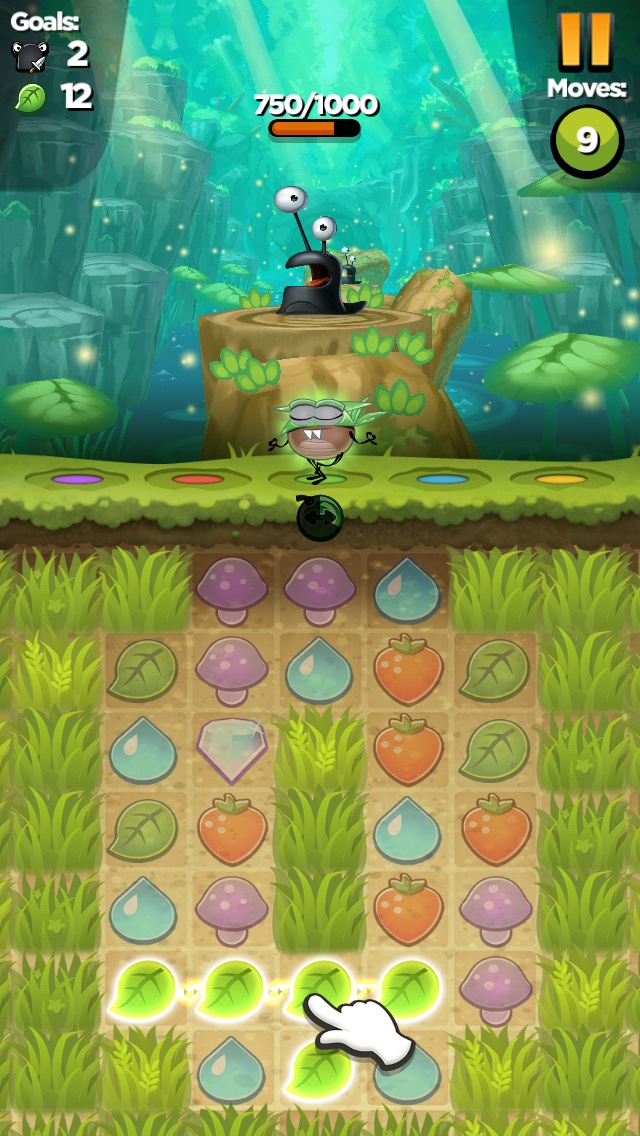 Best Fiends isn’t doing anything particularly new, despite doing it beautifully. It’s a line-drawing match-3 in the vein of Dots or Puzzle Craft, requiring players to draw connections between long chains of icons to collect them. Its objective-based goal system—made popular by Candy Crush Saga—does away with numerical scores entirely, awarding victory so long as you meet the stage’s requests in the moves allotted. And its lite RPG mechanics, fronted by the insect “fiends” themselves, combines a basic battle and evolution system that immediately brings to mind Puzzles & Dragons.

These features are blended together seamlessly to create an engaging, albeit familiar, match-3 experience. Players will travel the world of Minutia with fiends in tow, tackling variously arranged 7×7 boards. The fiends themselves—such as Temper the mite or Tantrum the dung beetle—act as your battle party, utilizing matches you make to attack the on-screen slugs. You’ll have a set number of moves in which to meet the stage’s requirements, which range from collecting a certain amount of a specific color to defeating X number of slugs.

The boards themselves are littered with a variety of obstacles and items to make matching interesting, including tree stumps that must be broken or slug ooze that needs to be siphoned off an icon before it can be collected. Doing so is usually as simple as matching an adjacent tile, although some items require special attention. Giant bombs, for instance, can only be activated by a proximity explosion, but doing so creates an extremely satisfying detonation that will clear the board entirely.

Creating these types of explosions is the job of the fiends. Each character is assigned to a specific color and matching his or her respective tiles—such as the green leaves for Temper and the red strawberries for Tantrum—causes them to attack the current slug opposition and also charge their special ability. Once an ability is charged, it’s deployed onto the board automatically in the form of a single tile that activates once matched. The activated results typically fall into one of two categories: Bombs blow up a row or column of nearby tiles while Converters turn the surrounding tiles to their own color, allowing for longer chains. 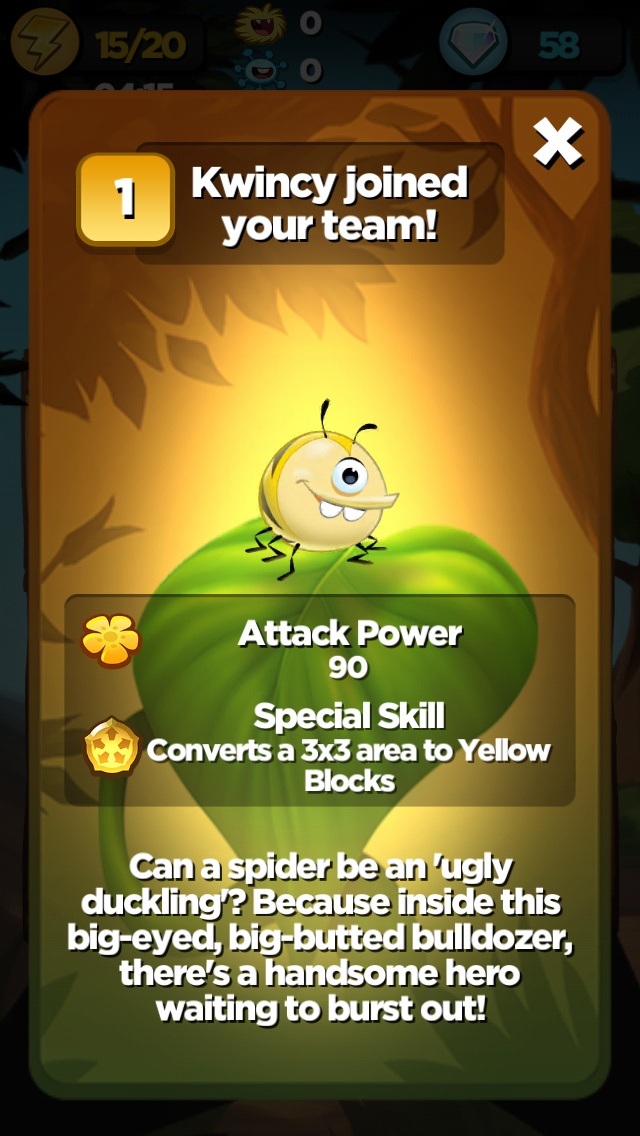 In between stages, fiends can be leveled up—and evolved, once they reach certain levels—in order to increase their attack power and the range of their abilities. This is a straightforward process that only requires spending “meteor mites” on the fiend you wish to level up, or the premium currency of diamonds if you don’t have enough mites. Both meteor mites and diamonds are earned by completing stages, defeating slugs, and sometimes simply by making matches.

The easiest way to earn them, however, is through the “rescue” screen. This area presents a 3×3 grid of locked boxes which can be opened so long as you have keys available. Three keys are earned at the end of each newly completed stage, although they’ll very rarely appear mid-stage when you slay a slug. Keys can also be purchased with diamonds, allowing an essentially endless series of box-opening if you have enough cash to do so. The primary purpose of these “rescues” is to uncover new fiends to add to your party: although you only begin the game with Temper, you’ll be able to recruit up to fifteen fiends—three per each color—by randomly uncovering them during rescues. This allows you to rearrange your party for specific goals by including fiends with different abilities.

The fiends themselves are adorable and varied, progressing through up to five different evolutions so long as you can afford the upgrades. Kwincy is a goofy one-eyed spider, Gordon a suspicious buck-toothed scorpion, and Temper an energetic mite with dreams of superherodom. Their battle cries and animations are endearing, and even their slug opponents have a quirky charm. But all of this personality is trapped behind a freemium model that restricts playtime to a trickle.

Best Fiends utilizes an energy system disappointingly reminiscent of the one previously found in Where’s My Water? 2. You begin the game with 20 jolts of energy, and playing a level costs one jolt. However, this cost is quickly increased to two jolts per stage as of level six and a whopping three jolts starting at level 31. Jolts recharge once every ten minutes, so a completely emptied energy meter takes over three hours to recharge. That’s ten plays every three hours, or only six plays of the later stages. The cost is the same for retrying a level, quitting a level, or even replaying a level you’ve already completed. This means if you want to play the game at all, you’ll be spending and draining energy. 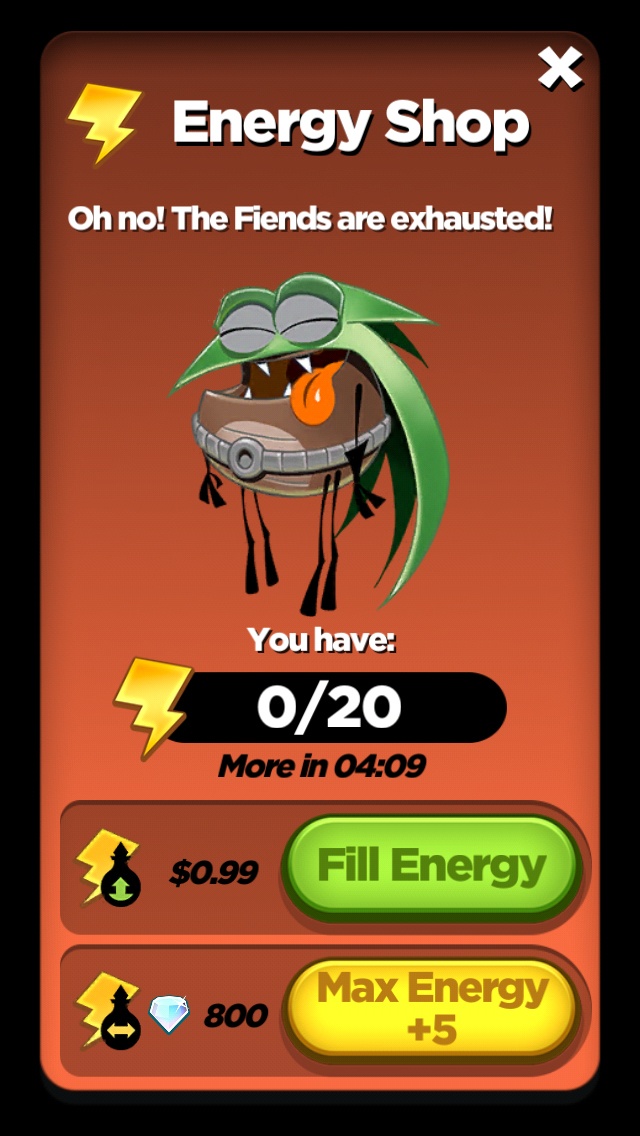 Without any in-app purchase to buy out the energy system, players are stuck waiting on recharges—or, of course, you can buy energy refills for 99 cents every time. You can also spend 99 cents on failed levels to receive five extra moves—hardly a generous offer when luck-of-the-draw tile drops may cause you to still lose despite ponying up cash. As stages become more cluttered with obstacles and difficult to complete, failure and energy-sucking restarts become a common occurrence.

The game does occasionally award you an extra point of max energy, but these appear during the rescue screens—so this relatively useless expansion comes at the cost of meteor mites, diamonds or fiends. You can also purchase an additional five max energy in exchange for 800 diamonds, which is an almost impossible amount to save up if you actually want to progress in the game. As a direct purchase, this many diamonds will set you back $7 and will only earn you one extra play every three hours anyway.

The final result is a gorgeous game trapped behind an obtrusive timer. Best Fiends’ gameplay isn’t entirely original, but it’s polished and engaging enough that we want to play it. Until the energy meter is revisited, however, there’s little reason to waste your time here.