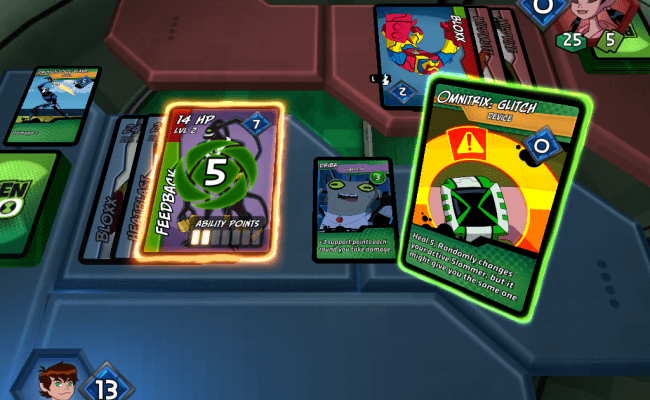 Slamming enemy aliens, and most of the competition too

I hate to start a review by being slightly egotistical, but I’m the parent of two daughters. That means that Ben 10 is something that exists for me peripherally, as a thing some of the boys they know are into. Collectible Card games, well, let’s say I’m on firmer ground. And now there’s a CCG for Ben 10, Ben 10 Slammers, and here I am reviewing it.

One of the things I know about Ben 10 is that Ben turns into ten different aliens with various powers, and uses them to battle other aliens. In the game, each player only gets to be three aliens, but that’s from a wide selection and they certainly have a wide variety of different powers. Each has a simple set of statistics: a hit point value, a support point value, and up to four different actions, most of which are attacks. The objective is to demolish all three of your opponent’s aliens. 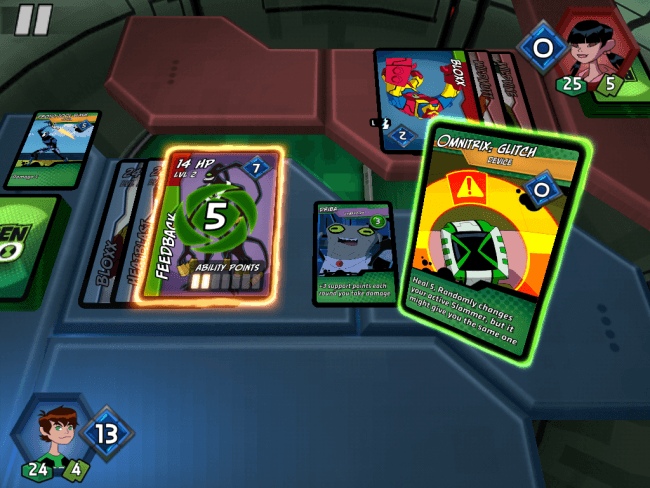 Each turn your active alien can use one action: a basic attack is free, but other actions require points which are accumulated at the rate of one per turn. Many attach effects like stun or burn to the target as part of the action. You also have a hand of support cards, which you can pay support points to play, and your current form dictates how many points you regain each turn. These have many possible effects from direct damage to extra actions.

It’s pretty simple, although it’s not obvious how to access the tutorial or instructions; but both are crystal clear once you find them. What’s impressive is how this basic framework is used to add lots of choice, flavour, and fun to the game. Support cards represent characters, devices, and situations from the TV show with appropriate effects, and the choice of cards and actions gives you a lot of possible combinations.

It’s a cracking introduction to the whole concept of battle card games: easy to learn, and while lightweight, still offering many points each turn; where sitting back and thinking about the powers and cards at your disposal and using them to make sensible choices, along with a bit of forward planning, can really buy you an advantage. 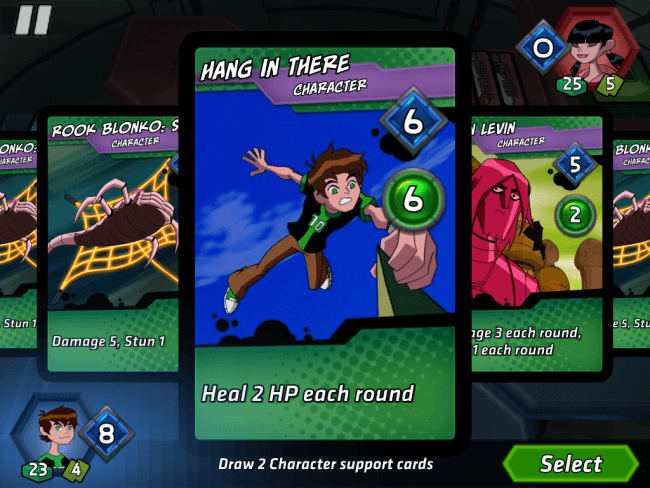 In fact, it might actually be a bit too well structured for some younger players. Your hand of support cards is about the only random thing there is in the game, and that means a good player will beat a weak one most of the time. In children’s terms, that means older ones will usually beat younger ones, which could cause upset.

And there’s plenty of opportunity for that to happen since the game features a good online play mode to find opponents. Mystifyingly, having done the difficult thing and implemented GameCenter, the developers seem to have forgotten a hotseat mode for face-to-face play. That’s a shame. After I’d played it and encouraged my older daughter to try, she wanted to play against me, but couldn’t.

Solitary play is also entertaining. You can play a random match, and the AI seems solid, but the draw here is the campaign, which sees you battling a variety of other characters from the game in gradually increasing difficulty. The campaign is quite long, and the narrative is minimal, but it’ll probably please fans of the TV series.

Winning games in any mode earns you five credits which you can use to unlock new powers for aliens you already own, or buy new ones. Simple aliens cost ten, but the biggest of the current selection costs a whopping one hundred and seventy.  You can buy more credits with real money, of course, but they’re pretty reasonably priced. It’s really, really nice to see a sensible IAP model in a kids app, with the top purchase at a relatively low cost and nothing priced at the point where it can’t be earned by dedicated play alone. 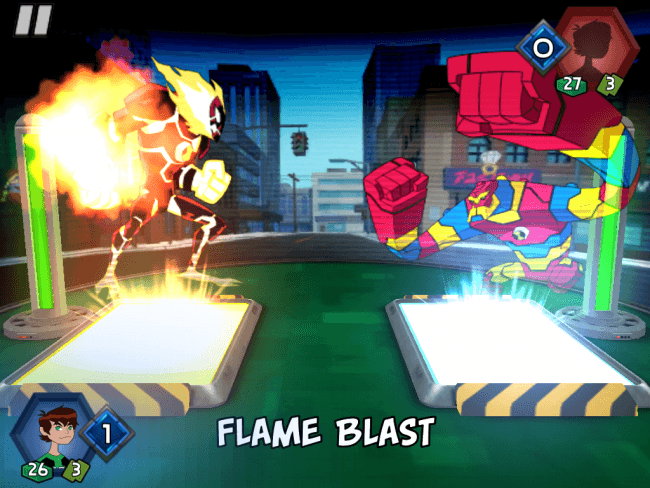 Ben 10 Slammers is good enough to appeal beyond fans of the TV series. There are some minor issues: I found one nasty, game-ending bug and there should be an option to speed up animations. And while it’s impressively varied, those simple mechanics will wear thin eventually. But there’s lots of fun to be had before that happens, and such a parent-friendly app deserves support in a world of rip-off freemium titles targeted at unwary children.