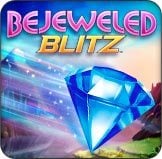 PopCap rarely does anything without giving it a lot of thought. Nowhere is this more apparent than in last year’s Facebook hit Bejeweled Blitz. PopCap’s first foray into social gaming was a resounding success, boasting more than 25 million players since its launch. Now PopCap is doing what comes naturally – trying to put that success in as many places as they can. First they added Blitz to the sublime Bejeweled 2 on the iPhone. Now they’ve come along and released a full download version of Blitz for the PC and Mac.

In case you’ve somehow managed to miss the previous versions, Bejeweled Blitz is a rethinking of the Bejeweled franchise that focuses on one-minute play sessions. The basic match-3 gameplay is still here, but rather than trying to progress through levels, solve puzzles, or tackle anything you might have associated with previous versions of Bejeweled, the entirety of the gameplay here is about getting as high a score as you possibly can in under 60 seconds.

Many of the special gems from Bejeweled 2 make a comeback, like power gems and hypercubes – but others join in the fun too. Star gems that get created whenever you form an “L” or “T” wipe out all of the gems in both the star gem’s row and column. Multiplier gems are created whenever you create a large cascade or chain a number of other power gems together in one move. These multipliers are the key to the whole game, as they can quickly be the difference between a 100,000 score and a 1,000,000.

The game also features coin gems, which when matched with other yellow gems will add to your in-game bank. The coins can be spent between rounds on special power-ups called boosts. There are five boosts to pick from that range from adding time to your next round to giving you a starting multiplier or the ability to blow up all your special gems without making a match.

While it may be a standalone PC download, the latest iteration of Bejeweled Blitz still ties into the overall Facebook experience. When you boot the game up you’ll be given the choice of logging into Facebook via Facebook Connect or playing offline. And while the game remains the same regardless, few would argue that a big part of the appeal in Bejeweled Blitz is competing against your friends for a high score. As such, the offline mode will likely appeal solely to those who still staunchly refuse to join the popular social networking site.

Everything that we’ve touched on in this review makes Bejeweled Blitz one of the best match-3 games to come out in recent years – but it’s also all available in the free Facebook version. So what, if anything, sets this PC download apart?

The game gets a massive visual overhaul, improving upon the flash-based graphics of Facebook by offering visuals on par with the PC version of Bejeweled 2. Audio has been stepped up as well, with not only a great soundtrack being added but a voice telling you every time you reach another 25,000 points as well. It’s a minor touch, but it made the experience much more exciting for score junkies like ourselves.

In addition to the improved graphics, you’ll also be awarded a bonus 1,000,000 coins to spend on special boosts – a tidy sum for those looking to get a leg up on their friends. You’ll also have access to 48 different in-game achievements, which provide a glorious challenge all on their own.

While we enjoyed what was offered, the experience wasn’t perfect. There’s no option for Bejeweled Blitz to remember your Facebook info, so you’ll need to re-enter it every time you boot up. The game also boasts a “full screen mode,” but the resolution options for this are pretty limited. If you have a widescreen monitor (and who doesn’t nowadays?) you’ll either need to run it at the highest resolution or suffer with a slightly stretched out playing field. With a game as graphically simple as Bejeweled, you’d think that running at such a high resolution wouldn’t be a problem for any graphics card – yet we found our system not quite up to the task. With so few options we finally settled on playing it at a lower resolution, but windowed.

That seemed to work best for us gameplay-wise too. Bejeweled Blitz is a game of speed, and it’s hard to work fast when you can’t view the whole board easily in a single glance. When running full screen, the playing field just felt too big. There’s a reason this game works so well on both Facebook and the iPhone, and it’s because the screen is always small enough that you can see everything with one look. Thankfully that option not only remains here, but can be tweaked to adjust the screen to whichever size you’d prefer.

Bejeweled Blitz for the PC is an outstanding game, but it’s also little more than a port of a game you can already play for free. We would have loved to have seen another version of Bejeweled bundled in with Blitz to fatten up the package – especially since the iPhone version offers both Bejeweled Blitz and Bejeweled 2 for a measly $2.99 – but no such extras were included. Still, if you’re the type of player who finds themselves logging in to the Facebook version day in and day out, you may really appreciate the little enhancements that this latest version makes. So long as you don’t expect to see anything drastically different, you’ll likely find this title to be a worthy addition to your collection.