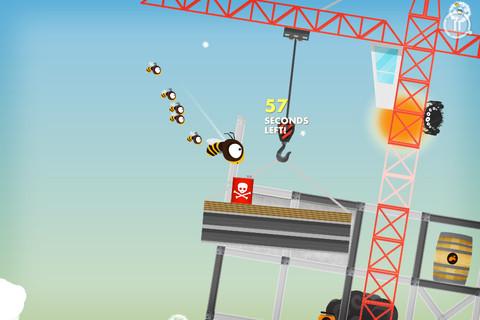 And then he stung my face, now I’m a bee-liever!

I’ve hated bees for most of my life. While I was grateful for their contribution to making what is easily the best thing to spread on toast (take that, jam!), I’d been stung far too many times to think of them as good people. That is, until I played Bee Leader. It turns out bees have much harder lives than I thought. Sorry, bees.

I felt compelled to try all of the offered control schemes – joystick, touch, and tilt – before getting started. I found the virtual joystick to be the best of the lot, but truthfully none of them worked as well as I’d hoped. It improved as I spent more time with the game, but all three felt a bit too floaty. To the game’s credit, though, it offers a lot of variety within its control schemes. There are tilt controls suited for wherever you are in relation to the device, and the joystick can be placed anywhere you want on the screen. There’s also the option to control the game with another iDevice via the Joypad app. It’s an interesting feature, but not all that conducive to being a truly mobile experience.

True to life, the main objective in Bee Leader is to collect as much nectar as possible before the sun goes down. It’s scattered throughout the sky in every level, but there are also flowers that are overflowing with the stuff. If you bring enough back to the hive, you’re free to move on to the next level.

Although a breezy game featuring bees going about their honey-making business without a care in the world would be fun for a bit, the inclusion of enemies like angry hornets and storm clouds help keeps things interesting. When they attack, you’ll lose nectar. I suppose that’s preferable to a bee getting robbed of its life, but not by much.

It isn’t just about flying around and getting nectar, though. Scattered bonuses like clocks that give you more time and “bee buddies” that follow you and provide you with more nectar become increasingly crucial to your success. Unsurprisingly, these things are oftentimes nestled away in dangerous, enemy-populated areas. Like I said: I’m sorry for not realizing how hard you have it, bees.

If it’s any consolation, my new sting-happy friends, the virtual world you live in is beautiful! The gorgeous, varied backdrops, the vibrant flowers offering up their nectar – it’s all very endearing. Even the menu is pleasant to look at, which isn’t something I can say for too many games. 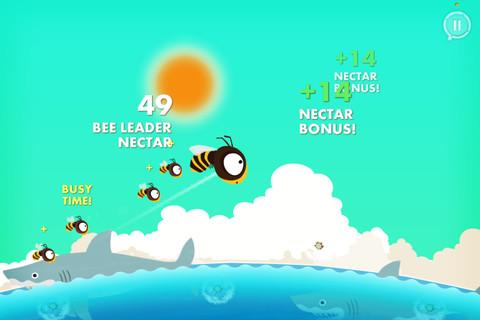 I realize it’s a word that gets thrown around quite a bit these days, but Bee Leader is an incredibly addictive game. So addictive, that I lost a solid hour of sleep just from lying in bed and playing it. And the first thing I did upon waking up? Played it some more. Not only is it the kind of game that can lead to you putting off life’s responsibilities – it’s also the kind of game that’s so fun you won’t even care.

Despite its control issues, Bee Leader is a game I feel every iDevice owner should try. Like a honeycomb dripping honey, it oozes quality from nearly every facet. The menus are clean and gorgeous to look at, the levels are cleverly crafted and similarly gorgeous, and the core mechanic is a whole lot of fun. If you were a former hater of bees like myself, this game will surely fix that. Just don’t go outside in pursuit of finding bees to hang out with and pet. Unless they’re bumblebees, that is. They’re fuzzy.