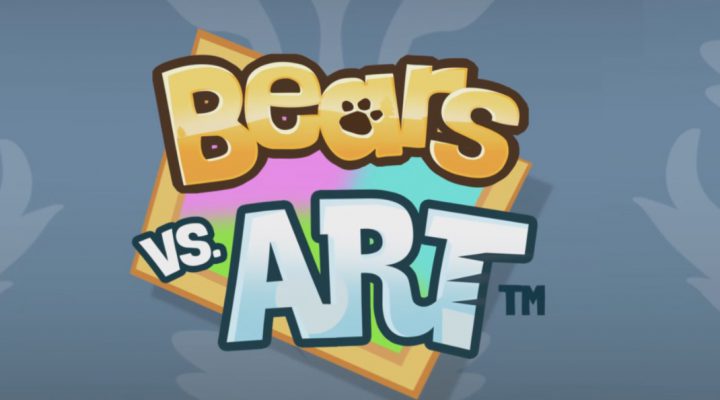 Hint system is only really useful on specific stages

Screen and controls are a bit tight on iPhone; zooming in and out wastes potentially precious time

Bears vs. Art puts players in the paws of furry iconoclast Rory as he exacts revenge upon the art world for destroying his woodland home in the name of new museum construction. Rory’s rage knows no bounds, and his need to slash every painting in sight will leave gallery goers, security guards, and even would-be thieves in a trampled stupor. No museum is safe as our adorably angry protagonist travels the globe in search of Pollocks to pummel, Malevichs to maul, and Kandinskys to clobber (he especially hates abstract art).

Every world is full of levels which each present a new room arrangement and set of paintings hanging on the walls. Most levels require Rory to destroy every painting in order to progress, although some also include scaring patrons away as a goal. To do either action, Rory just needs to touch the object in question, painting or person. 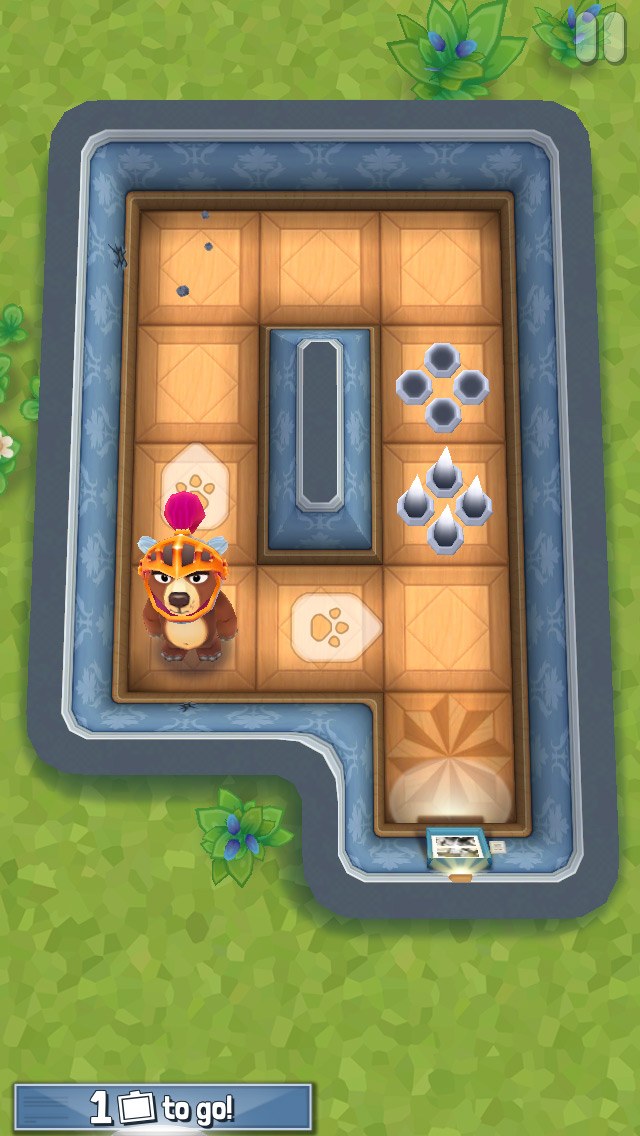 The challenge is in actually getting Rory to those objects. Players can tap any direction to move, and our amped up hero will hurl himself in a straight line until he hits something. Usually that something is a wall, and if that section of wall contains a painting, he’ll get to slash it to ribbons in a brief mini-game nod to Fruit Ninja. Then, from this new location, you can tap again to surge towards another stopper. It’s a bit like bear billiards without ricochet, or bear Sokoban on ice.

While bouncing between walls to reach all the paintings can be challenging in and of itself, the real joy of Bears vs. Art’s gameplay comes from the variety of obstacles that are introduced over time. Rory will soon have to contend with retracting spikes, one-way arrows, laser beams, teleporters, stealthy ninjas, and dozens of other dangers in his bouncy rampage. Levels are fairly small so he’ll rarely deal with all of these at once, which allows for a great deal of variety between stages and as new hazards are added.

On top of this, levels are usually assigned a move limit, time limit, or both, requiring players to carefully plan their approach to some stages or barrel forward manically in others. Levels with move limits often provide the bare minimum number of taps needed to reach all paintings, leading to a slower, chess-like experience as you work out moves in advance. Timed stages that task Rory with tackling the milling museum patrons are fast-paced and frantic, providing a break where you can let loose and fling yourself with abandon. Coupled with all the different obstacles and room shapes you’ll encounter, no two stages feel alike despite using the same simple, one-tap controls from stage one to 100+.

Although there are some fairly tricky stages even early on, Bears vs. Art offers a number of ways to prevent the frustration of getting completely stuck. First, you’re allowed to skip one level for free every 24 hours (or pay $0.99 to skip multiple levels in a single day) and continue progressing along the map. Second, a hint system is in place that provides the first two moves Rory should make on a stage; hints can be purchased or earned through daily logins. Finally, and most enjoyably, Rory has both skills and costumes that improve his art-attacking abilities.

Those skills can be permanently leveled up with points earned freely over time in order to increase the number of coins Rory collects, turns he can use, and time on the clock per level, as well as the total amount of energy available to actually play the game. Although the increases are small at first, adding one move or ten seconds per level up, many stages are infinitely easier with even just one extra move at your disposal. Rory’s costumes contain the same type of bonuses if you choose to improve them with coins, as well as unique and useful “specials” like slowing down guards’ movement. Besides the skill boosts, the costumes are just a fun aesthetic addition to an already charm-heavy game: who doesn’t love watching a bear in a fez wreak havoc? 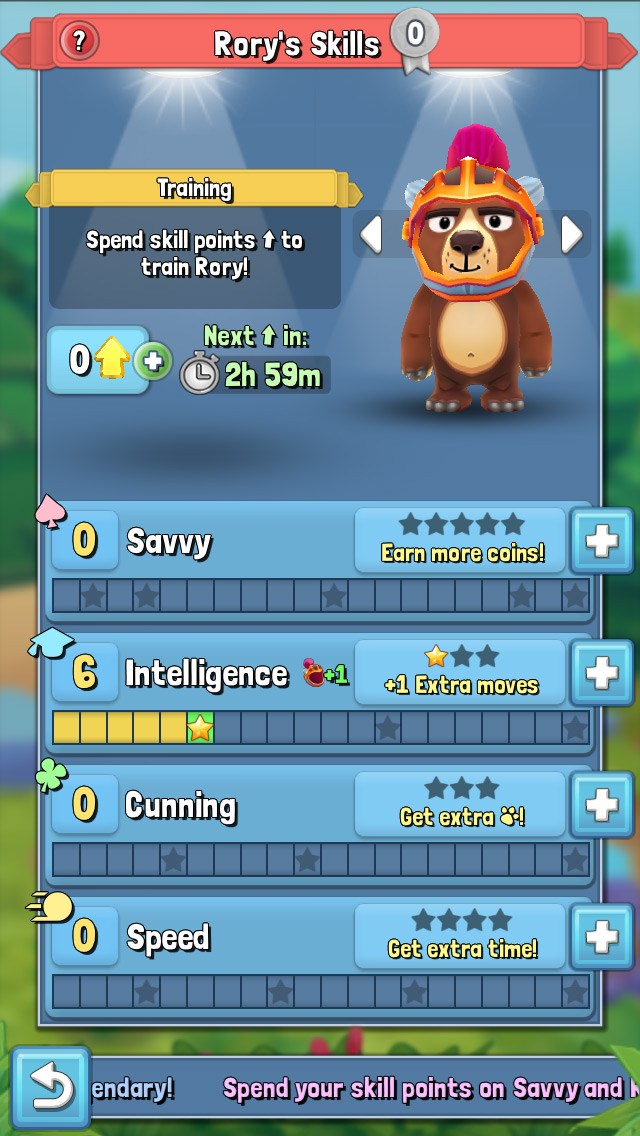 These playful features and endearing charm are found throughout Bears vs. Art. Many of the paintings Rory destroys are playful bear-iations on famous works, such as “Abearican Gothic” or “Vincent Bear Gogh.” The map screen is populated with Halfbrick characters-as-Facebook friends, updating you when Zombie T-Rex or Colossatron complete a stage. Intermittent cutscenes present hilariously pretentious conversations between modern arties. When Rory fails a level, he often gives the player giant, near-tears bear eyes that are always aww-worthy. All of these little details, as well as larger ones—like the inclusion of a procedurally generated Infinite Mode, which ensures players will always have new levels to tackle—highlight the loving polish put into this puzzler. 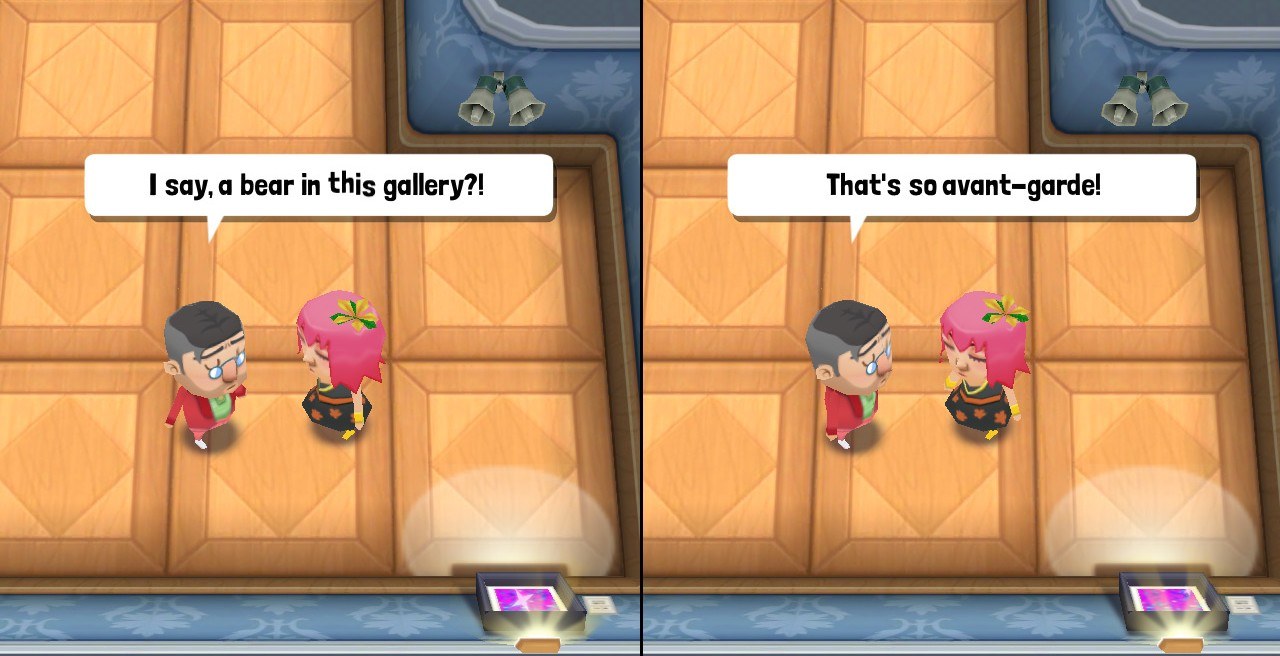 For everything it does right, Bears vs. Art still has a few ragged claws. Although its energy meter is admirably upgradeable via the skill system, it can still feel oppressive at a 10 minute wait per jolt, especially when you can pour through all eight starting energy in minutes on a tough stage. There is a premium upgrade available that gets rid of the energy meter entirely for $5.99, but having played the soft launch, we really miss the formerly included feature that rewarded one jolt upon first completion of a stage.

Similarly, another change from the soft launch has us conflicted: costumes no longer come with built-in skills but act as blank canvases that must be upgraded for any benefit. While this is a boon to players who want to build a powerful version of their favorite item, it provides little incentive for anyone but hardcore collectors to purchase more than a few costumes. Especially at a whopping 1,000 coins a piece: why buy a second hat when you can spend those coins on making the first hat useful? 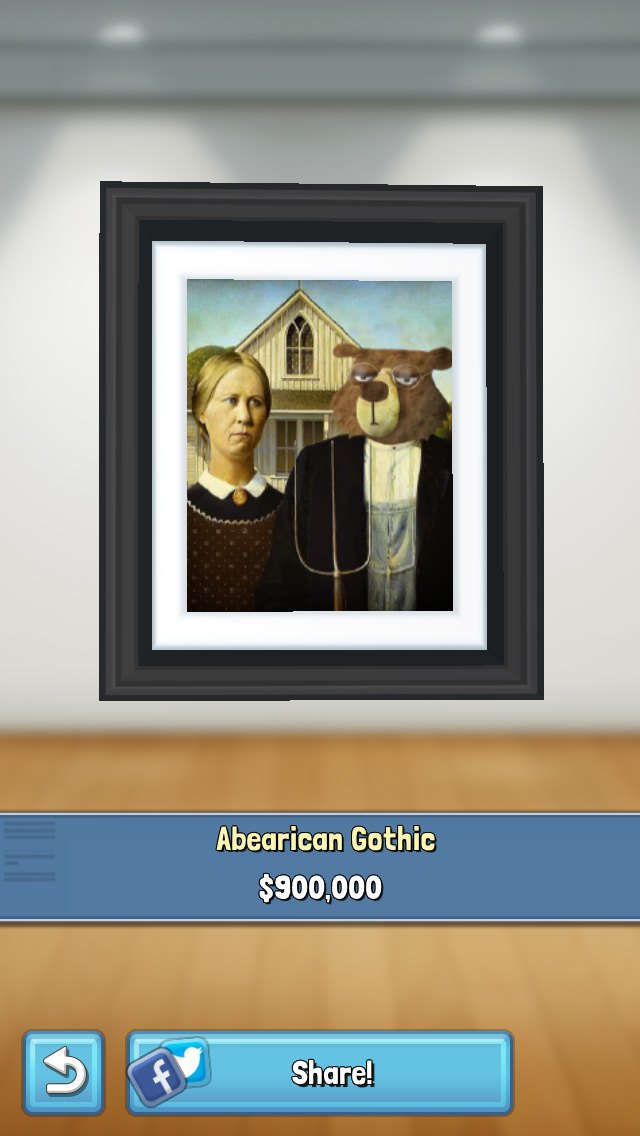 Finally, the hint system is hit-or-miss depending on the type of stage: it always begins with the first two moves of the stage, no matter how far along you are, and shows two more moves per hint. This means if you’re stuck halfway through a 10-move stage, you’ll need to use up four or five hints to actually get any help. Although the reason it works this way is understandable, it’s still a source of frustration when Rory is five paintings past the hint he’s being given.

These few cracks don’t affect the canvas as a whole, though. Bears vs. Art is a charming, polished, and lovable addition to Halfbrick’s oeuvre. If hung in a gallery, it would definitely be worthy of slamming with your body and tearing into beautiful bear confetti.