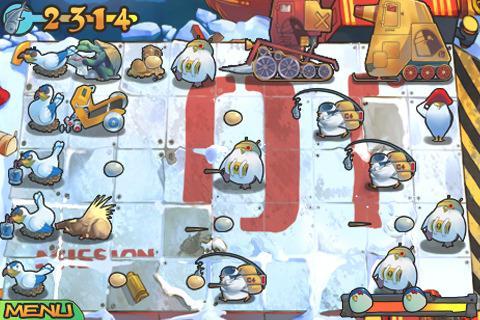 Even with the constant threat of global warming threatening to destroy their natural habitat, polar bears have much more pressing concerns. Like penguins, for instance. Namely, heavily militarized penguins that will stop at nothing to destroy your home. That’s the premise of Bear vs Penguins, a tower defense game that tries its hardest to be the next Plants vs Zombies, but fails to match it in terms of both quality and sheer craziness.

There’s a story holding the events of Bear vs Penguins together, but what actually happens throughout the game is hard to say. The penguins attack the bear’s home for reasons never fully explained. And it’s pretty easy to completely gloss over the story all together, as it’s not only lacking in details, but is painfully written and features numerous grammatical and spelling errors. So it’s a good thing the story isn’t compulsory when it comes to enjoying the actual game.

Bear vs Penguins is set-up almost exactly like Plants vs Zombies: the screen is comprised of a series of rows, with enemies continuously coming down them. It’s your job to strategically place units in their way so that they don’t reach the end of the row. There are several different types of penguin soldiers — some are faster than others, some are immune to certain weapons, etc. — and the game gives you plenty of different units to deal with them. The units are comprised of various creatures, like armored turtles, egg-shooting birds, and charging woolly mammoths.

Unfortunately, unlike the game it tries so hard to emulate, most of the units in Bear vs Penguins are fairly useless. Chances are, even once the game opens up and gives you a large selection of units to choose from, you’ll stick with a few tried and true soldiers. To make matters worse, the game gives no description for units once you unlock them, so the only way to figure out what they do is through trial and error. Purchasing units will cost you fish, which you earn over time but also through killing enemies. It’s pretty hard to actually run out of fish, and since many of the units take far too long to recharge, you’re often left with a surplus of currency that you have nothing to spend on.

Likewise, beyond the initial wackiness of the game’s concept, there’s very little creativity in the way the units are designed. Though the art is competent, the actual characters are rather dull and inconsistent. In a game with an arctic theme, it’s quite strange to see televisions and water coolers as actual units. The game is also incredibly short, with less than 20 stages to play through and little incentive to replay them.

If you’re going to copy a game, especially one as beloved as Plants vs Zombies, the only way to succeed is by bringing something new and interesting to the table. Bear vs Penguins does neither. Instead you’re left with a strategy game that provides little in the way of challenge, charm, or fun. It rehashes old ideas and does it poorly. If you’re a fan of Plants vs Zombies, well, you should probably just stick with PopCap’s classic.