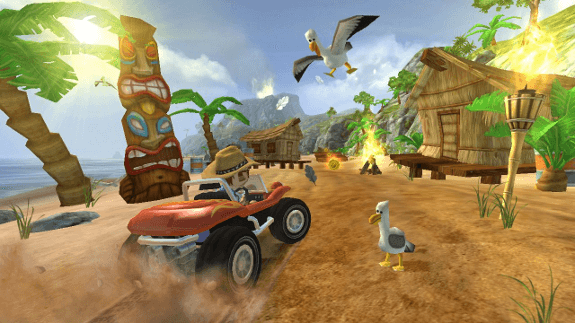 The most fun you can possibly have at the beach.

There’s a severe lack of quality kart racers on Android. So when something like Beach Buggy Blitz comes along, it’s easy to take notice. It’s especially easy to take notice of the sharp graphics, catchy music, and free price tag. But while your first few joyrides will seem like smooth sailing, once you get the feel of it, you’ll begin to notice some bumps along the way.

Beach Buggy Blitz is in the same vein of Temple Run and Jetpack Joyride, where you’re moving forward on an infinite track. Where this game differs from the others is that you don’t fail from falling off the track or running into a hazard. Instead, you’re given a strict time limit. If you get there fast enough, you can pass a checkpoint that will add time to the clock, allowing you to advance farther. As soon as the timer hits zero, your car rolls to a stop and it’s game over.

Beach Buggy Blitz is very welcoming to newcomers and veterans alike. There’s not much in the way of tutorial, but the game is straightforward enough where one isn’t really needed. Your driver always has the gas held down, and all you need to do is turn and tap the breaks. There are two control methods, touch and tilt. The tilt controls work as expected, but the game plays much better with the precision of touch controls. No matter which option you select, the controls are sharp enough to make quick maneuvers, but just loose enough to keep a challenge – even on cars with a high control stat.

Visually, Beach Buggy Blitz is one of the best titles Android has to offer. You’re given some ability to adjust the graphics to your device’s hardware, but even the low settings are colorful and sharp. The detail put into the drivers and vehicles are standard fare, but the polish of the different environments is what steals the show. While the graphics are still far from most modern PC and console games, they easily hold their own. I ran into occasional framerate issues, but it happened infrequently enough to not be too much of a factor.

Sharp controls and gorgeous visuals can’t save Beach Buggy Blitz from one hurdle: It’s doesn’t start out fun. That’s not to say it’s never fun, but it takes a while to get to that point. Because the tracks are generated on the fly, you’ll frequently run into difficult areas packed with hazards. These hazards will slow you down, making it harder to reach the next checkpoint in time. This is tolerable for a while, but eventually the game will generate something that resembles an obstacle course more than a race track. It can feel a bit unfair, at least at first.

Fortunately, the game seems to understand the nature of its track generation. To remedy this, you gather coins during your runs and you can spend them on new cars, drivers, item boosts, and upgrades. Drivers are purely aesthetic, but the other options can greatly change the way you play. Different cars have different stats that will change how you approach a run. For example, if you have issues turning, you may want to buy a car with a high turn stat. The item boosts can be picked up while driving and have numerous perks, such as invulnerability toward hazards, and picking up a coin magnet.

These unlockables—once they’re obtained—transform Beach Buggy Blitz from a tedious chore into a genuinely fun experience. Similar to Jetpack Joyride, certain unlockables will help you earn coins faster, so you can unlock more stuff. Once you find what these options are, you’ll gather coins much faster than before. If this process still strains your patience, you can purchase in-game coins, but it’s not a necessity. 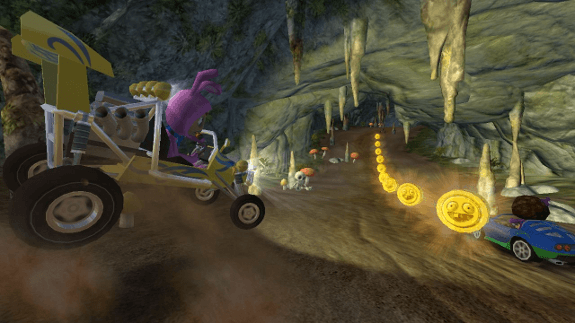 The only thing that Beach Buggy Blitz feels like it’s missing is some sort of multiplayer aspect. You will run into enemy AI throughout your runs, but they basically work more like moving obstacles than actual racers. You can connect with Swarm to unlock leaderboards, but that’s the only sense of multiplayer available. Luckily, the loads of unlockable content and achievements will entertain most players to the point where they forget about other people.

Beach Buggy Blitz is one of the best infinite run-style games on Android. While it lacks some of the polish of titles like Temple Run and Jetpack Joyride, it still hangs on with its wonderful gameplay. Those who get bored easily may need to overcome a slow start, but those who get enough coins to start unlocking items will be able to feel the real joy from the game.