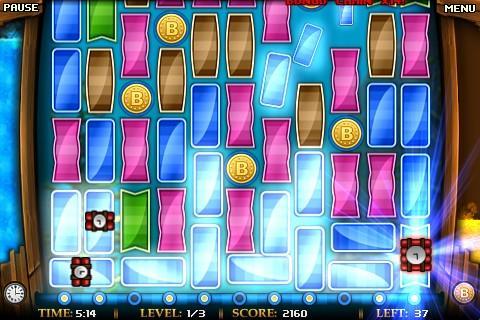 Despite what the name might imply, Bayo Bongo isn’t a rhythm game. Instead, it’s a block matching puzzler with an underwater theme from the creators of Brunhilda and the Dark Crystal. But while the action is enjoyable and the production values solid, the game suffers from a complete lack of any sort of save function and a minuscule number of different stages to play through.

Bayo Bongo features a familiar mechanic, tasking players with matching up various blocks of the same color. To do this, you simply need to tap on the blocks, and after a short while they’ll all disappear. This gives you time to set up massive chains, especially since the blocks don’t have to actually be touching each other in order to be cleared away. But unlike most puzzle games, the end goal isn’t to simply clear away blocks. Instead, removing blocks will help guide coins to the bottom of the stage. Get all of the coins to the bottom before time runs out and the stage is complete.

Of course, things get slightly more complicated than that. Some of the coins and blocks will be iced over, forcing you to tap on them to clear it away and make them usable again. And there are also blocks covered in chains, much like in the Fishdom games. These blocks can only be cleared away by setting off a bomb block close to them, and bomb blocks can be acquired by creating large combo chains. The challenge increases rather quickly across the game’s 15 stages, ensuring that you’ll frequently be fighting against the clock in order to get all of the coins to safety.

And yes, you read that right: there are only 15 different levels in Bayo Bongo. While this may sound like a small number for a puzzle game, what makes it worse is the way the game is structured. Each time you play, you’ll have to start at the beginning again. Even once a stage is completed, there’s no way to simply go back and re-play it whenever you like. Instead, each time you play it’s back to the beginning. Worse still, the game features no save system at all, so you can’t exit the app and then return to where you left off.

It’s especially frustrating considering how enjoyable the core gameplay is. Though not entirely unique, the block matching puzzle action is fun and challenging. But there’s only so many times you can re-play the the first stage of the game before the frustration sets in. And don’t even think about answering that phone call or checking your email, or it’s back to the beginning for you. Bayo Bongo certainly looks and plays great, but its save system, or lack thereof, marches to the beat of a different drum. One that doesn’t like it when people can save their game.