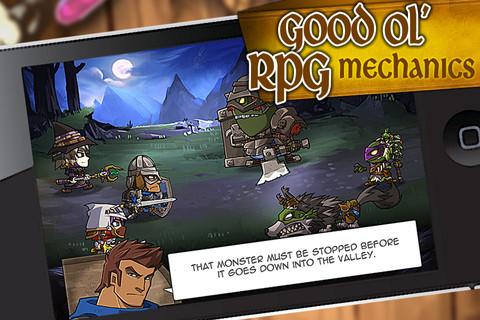 RPGs have been one of the few iOS genres that can emulate the quality of major console releases like Final Fantasy Tactics and Chaos Rings II. Because of this, they sometimes command major prices (up to nearly $20 for the aforementioned titles). By contrast, Digital Tales’ Battleloot Adventure aims to present an engaging turn-based RPG for a budget price. Aside from a few issues, it delivers bang for the buck.

Battleloot Adventure‘s story is pretty light: gather a group of big-headed mercenaries, and compete across the land of Kameloot for as much money and honor as you can grab. You begin by gathering an army of four classes (warrior, rogue, sage, and mage), and eventually align yourself to one of four of the land’s kingdoms in pursuit of glory. From the humorous paper cut-out cutscenes to the disproportionate character models, your adventure is much more tongue-in-cheek than serious.

Gameplay is composed entirely through turn-based combat, and that’s definitely not a bad thing. Battles are conducted with a custom team of three characters, with touch controls determining attacks, items, and abilities. A rock-paper-scissors mechanic determines your combat strength: Sage beats rogue, who beats warrior, who beats mage, who beats sage. Your survival relies on appropriately taking advantage of these class reactions.

In addition to the traditional point-and-click attack interface, you can also make a few live decisions. In the middle of your attack, you can touch additional teammates to launch a combo attack. Combos expend your character’s energy meter, but also reward you with ability-powering stars. The energy meter also powers your ability to deflect incoming attacks on the fly. The risk-reward system between offense and defense sounds complicated, but early tutorials help simplify combat.

Past the tutorial stages, Battleloot Adventure lets go of the reigns completely. You’re given the freedom to arrange your party, select missions in any order you desire, and purchase new equipment. Gold can be acquired through in-app purchases, but it comes so frequently as rewards for missions that we never found it necessary.

Each mission pits you against a plethora of colorful locales and creatures. From spellcasting sheep to chimeras, new enemies are always fun to discover. In addition, every creature looks amazing as well. Character models are crisp, and each of the game’s hundreds of unique animations are well rendered.

Unfortunately, despite the charming visuals, Battleloot Adventure is missing something crucial: personality. It’s certainly entertaining, but the lack of a clear-cut story leads for an adventure that feels fairly generic halfway through. Questing is fine, and is a staple factor in the RPG genre, but non-stop questing with no main plot or villain can feel a little pointless at times. It’s also hard to get attached to any of the characters: they have no names, and deliver the same lines of dialogue no matter who you have in your current party.

Another issue is the wildly changing difficulty curve. Each mission comes with a three-point scale to symbolize difficulty, but at times can be wildly misleading. Some level 3 quests are far easier than other level 2 quests. Other times you’ll find yourself at a quest far harder than anything you’ve attempted so far, forcing you to go back and grind through past stages that you’ve already beaten. 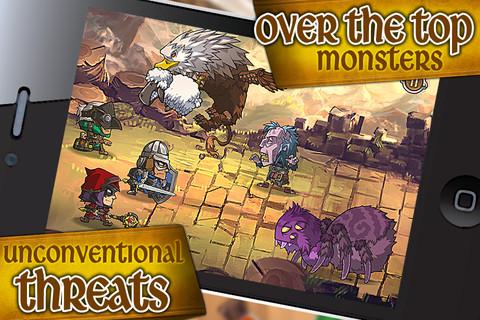 The final thing that keeps Battleloot Adventure from being a must-buy is its current imperfect state: there are still a few glitches and bugs that need ironing out. The most prominent (and most annoying) is a glitch that ends your turn after selecting your attack, effectively wasting your opportunity. Another strange one included a moment where our alchemist’s very helpful second ability stopped working for the rest of the game. We also encountered one battle where enemy health bars simply ceased to decrease until we restarted the app. While the occasional glitch isn’t uncommon in a brand new release, these ones definitely put a damper on our fun.

Battleloot Adventure has a lot more going for it than we expected in a budget app. If you don’t mind straight questing, there’s easily 10+ hours of content here to play through. Combat is slick, and the dozens of unique creatures are a blast to pummel. The lack of a story, grinding, and glitches keep it from being a definite must-buy, but it’s still a decent RPG experience.

House of 1000 Doors: The Palm of Zoroaster Review